It’s about time. We’re finally back to some fresh episode with only the Ring of Honor crew as it’s time to deal with some fallout from Best in the World. It’s not clear what the next pay per view will be (or when it will be for that matter) but odds are we’ll be seeing Adam Cole as the next challenger to Jay Lethal’s ROH World Title. Let’s get to it.

We open with stills from Lethal vs. Briscoe II where Lethal retained the title clean.

Kincaid put in a strong performance in the Top Prospect Tournament. Dijak has Prince Nana in his corner. Donovan powers him into the corner off a lockup and actually rams him into the corner while still in the lockup. Dijak knocks him outside but can’t get a suplex on the floor. Instead Kincaid slips out and lands on the bottom rope, only to springboard backwards into a facebuster to take us to a break.

Back with Kincaid minus his shirt and getting thrown out of a suplex for a big crash. Another faceplant lets Kincaid come back again, setting up a seated Blockbuster to put Donovan on the floor. That means a suicide dive into a sunset bomb, followed by a springboard tornado DDT for two on Dijak back inside. That was a very flashy looking sequence and Kincaid one ups it by standing on the post for a super Diamond Dust (flipping Stunner). An armbar on the chokeslam arm has Dijak in trouble but he catches Kincaid coming off the top in Feast Your Eyes for the pin at 9:41.

ACH is ready to become #1 contender to the TV Title tonight.

This was billed as the main event last week. Silas and Bruiser are challenging after winning Tag Wars on the road to Best in the World. Before the match, Daniels says he’s glad to be ready to face some REAL men. Kazarian and Young start things off by trading wristlocks before they both catch kicks to the ribs. They slowly put each others foot down before Kazarian takes over with some right hands. Daniels comes in and offers a knee for a faceplant but Young comes back with a kick to the chest.

The rather large Bruiser comes in to drive Daniels into the corner as this heel vs. heel thing is taking some getting used to. Daniels gets crushed in the corner with a running Umaga Attack, running knee and Cannonball but Daniels easily takes over on him and scores with a split legged moonsault as we take a break.

Back (after Mark Briscoe saying he’s going to beat the better athlete in ACH tonight) with Bruiser crossbodying Kazarian to make the hot tag off to Silas as everything breaks down. Silas knees Kazarian in the face for two as the Addiction flips Silas into the air for a sitout powerbomb/neckbreaker combo and another near fall. Now it’s Bruiser getting knocked into the corner but Silas breaks up a double superplex. The big frog splash misses though and it’s the BME and Flux Capacitor (springboard spinning legdrop) to put Bruiser away and retain the titles at 12:19.

Kyle O’Reilly is fired up about his chance at the ROH World Title in two weeks.

It’s time for a live Fish Tank (Bobby Fish’s talk show) where Fish talks about how he’s the King of ROH. His guests tonight are the potential #1 contenders to his TV Titles: Mark Briscoe and ACH. Briscoe goes first and wants to know what ACH stands for.

Perhaps it’s American Child Hero because ACH looks like a fourteen year old who has been eating grilled cheese all morning. Maybe it means Acrobatic Catlike Horseman? Fish isn’t sure but thinks Mark is on to something. ACH doesn’t like being called names like that because he wants his legacy. That means it’s time to beat up a chicken like Briscoe so the name means Annihilating Chickens Punks. Fish says let’s do the match right now.

Winner gets a title shot against Fish, who sits in on commentary. Briscoe sends him to the mat to start and grabs a headlock to keep the high flier on the mat. ACH’s wristlock doesn’t last long so he goes with a rollup for two instead. It’s time to start flipping around until ACH dropkicks him out to the floor, meaning we get some basketball posing. Mark switches places with him and drops ACH, only to miss a Cactus Jack (complete with BANG BANGs) apron elbow.

ACH runs way too far around the ring and jumps to the apron for a headscissors around the post. Back in and ACH tries a springboard in but Mark dropkicks him backwards as we take a break. We come back to ACH hitting a discus lariat in the corner before they fight over a suplex for a long time. Mark finally gets him over but bangs his own head in the process to put both guys down again.

It’s time for Briscoe to take over as he sends ACH into all four turnbuckles in a row and then back to the first for a bonus. Mark can’t get a fisherman’s suplex but settles for a Death Valley Driver. He takes too long going up top though and gets kicked in the head, only to block the Midnight Star. A brainbuster sets up the Froggy Bow to put ACH away at 11:30.

Briscoe and Fish stare each other down to end the show.

Opinion: The Six Stars from NXT Who Should be Drafted to the Main Roster 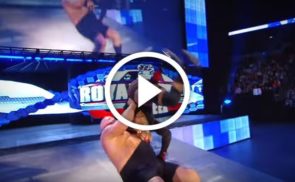 Ramped up! 15 unforgiving moves on the ramp: WWE Fury