We’re rapidly approaching Final Battle and the final battles of note from the promotion. That doesn’t exactly make things feel that important around here and I’m not sure what that is going to mean going forward. At least the action should be good and that’s about all we can ask for around here. Let’s get to it.

Pure Rules. Johnson runs his mouth about how awesome he is and how he you spell Pure M-E-C-C-A. They go with the grappling to start until Walters nips out of a headscissors to send us to a break. Back with Johnson hitting a shoulder to the ribs in the corner but getting armdragged into an armbar. It works so well that Walters does it again, with Johnson not being able to monkey flip his way to freedom.

Johnson tries to escape but gets pulled back over the top by the barred arm. Walters gets caught on top though and a hanging cutter brings him back down for two. Some knees to the back set up a quickly broken cobra clutch but Johnson kicks him in the head to cut off a comeback. We take another break and come back again with Johnson dropping a fist, which counts as the first closed fist. Johnson doesn’t seem to mind but Walters is back up with a middle rope legdrop on the arm.

Something like an abdominal stretch on the mat forces Johnson to use his first rope break and they trade rollups for two each. Walters grabs a Sharpshooter, meaning that’s the second rope break from Johnson. Another Sharpshooter attempt burns the last rope break but Johnson gets in a shot to the eye. Johnson kicks out Walters’ knee, sending him face first into Johnson’s knee, setting up Trust The Process to finish Walters at 11:30.

Post match Johnson makes the still out of it Walters shake his hand.

The winner moves on to a #1 contenders match for the Women’s Title shot at Final Battle. Angelina Love and Marti Belle are here with Leon and Kay respectively. Leon bails to the floor to start so the other two trade wristlocks inside. Kay’s headlock takes her to the mat but it’s broken up in a hurry. Neither can get a takeover until Adora hits a belly to back for two.

Now Leon comes back in and sends Adora into Kay as we take a break. Back with Leon getting caught in a double submission, which is broken up so Kay and Adora can slug it out. Kay takes Adora up top for a superplex but Leon turns it into a Tower of Doom for the big crash. That means a pair of near falls each so Leon throws Adora outside. Astral Projection is enough to finish Kay at 6:58.

Dalton Castle is ready to bring pizzazz to the TV Title. He also compares himself to Picasso and Jackson Pollock.

Castle, with the Baby Chickens, is challenging and Lee’s entrance is cut out for some reason. They go with the grappling to start as neither can get very far on the mat. It’s way too early for the Bang A Rang so Lee sends him outside, leaving Lee to hit the Tranquilo pose. Castle is sent back first into the barricade so Lee is back in with a Falcon Arrow for two. Back up and Castle takes him outside for a whip over the barricade for a crash. They come back in with Castle grabbing a waistlock as we take a break.

We come back with Castle kicking Lee in the face and standing on his chest. Lee fights that off in a hurry and hits the running corner dropkick. Castle blasts him with a clothesline for two of his own and they’re on the floor again. Lee sends him over the barricade and loads up the dive but has to dive onto the Chickens instead.

Back in and a clothesline gets two on Lee instead but here are Shane Taylor Promotions and La Faccion Ingobernable to brawl. The Bang A Rang is countered into a cradle for two on Castle and Lee hits the running knee. Cue Dak Draper though and a cheap shot sets up the Bang A Rang to give Castle the pin and the title at 11:34.

Video on EC3 vs. Jay Lethal, which is up next week. 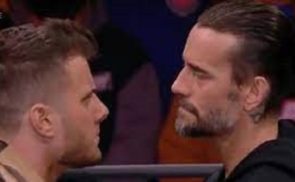