We’re still in Baltimore and that means we should be getting close to the main event sooner or later. The show was built around the NWA invasion, meaning NWA World Champion Nick Aldis should be around. That could make for something interesting and that’s what this company is needing. Let’s get to it.

Horus starts fast with the strikes but can’t get very far. Instead, King goes with the power to shove him down. They go outside and we take a rather early break. Back with Horus trying his own strikes, setting up a slingshot hurricanrana to the floor. King gets back in and blasts him with a clothesline, followed by the hard piledriver for two. Horus is right back up with a tornado DDT for two, but King blasts him with a clothesline. The Ganso Bomb finishes Horus at 8:51.

At this point we get the first of several ads for Past vs. Present, which wouldn’t be taking place due to the Coronavirus.

La Faccion Ingobernable is ready to work with Nick Aldis, even though he’s not even the most famous wrestler in his house. Rush is the best in the world anyway.

Rush jumps PCO from behind to start and hits a basement dropkick to the back. Marty comes in with a backbreaker to put Rush down and the fans are rather pleased to see him. It’s off to Aldis to work on Marty’s arm, only to get armdragged into an armbar. Aldis gets sent outside for a baseball slide but PCO misses the way too early Swanton to the apron. PCO sits up on the floor though and the brawl is on with Aldis, only to have Rush make the save.

Camera cord choking ensues until we settle down to Rush chopping PCO in the corner. Rush kicks him in the face and strikes the pose as we take a break. Back with Aldis dropping an elbow for two but a clothesline gets PCO out of trouble. Marty comes in and starts cleaning house but the CHICKEN WING is broken up with a shot to the head. A tornado DDT allows the tag back to PCO as everything freaks out.

PCO takes out Rush and Aldis with the big flip dive, but Aldis is right back with a Tombstone to Aldis back inside. PCO crotches him on top though and Scurll hits a big superplex. The Quebec Cannonball gets two with Rush having to break it up at two. Aldis drops a top rope elbow on PCO and now it’s time to stare it down with Rush. That’s enough for Rush though, as he walks up the ramp, leaving Aldis to get his fingers snapped. The PCOsault finishes Aldis at 15:35.

We wrap it up with some rapid fire promos for the 18th Anniversary Show, which was scheduled for TWO DAYS after this show. Unless I missed it, this is the first mention of the show so far. Mark Haskins gives a passionate speech about wanting to become the World Champion to give his family a better life after all these years of hard work.

RUMOR: What’s Next For Brock Lesnar After WrestleMania 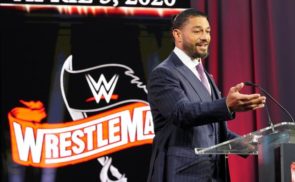 UPDATE: WrestleMania 36 Likely to Still Go On, Under One Condition