We’re continuing on the road to the relaunch, which means we get to continue our look through the video vault. So far that has only meant the best of 2021, which I can understand, but it would be nice to mix it up a bit with some of the older stuff. That is the foundation (not to be confused with The Foundation) of the company and a look back at it would be nice. Let’s get to it.

As usual, these will be the full versions rather than the clipped editions that air.

Quinn McKay gives us the usual welcome but this week we have something special: the Best of 2021 Awards!

From Death Before Dishonor, and one of the top five matches of the year as voted by the fans, with Rok-C named the Women’s Wrestler of the Year.

For the vacant title so we get the Big Match Intros. Feeling out process to start as they head to the mat, with Rok-C grabbing a headlock….and let’s look at commentary for a bit for some reason. Rok-C cranks on a hammerlock before switching over to the leg. That doesn’t last long either but Alize escapes the Fujiwara armbar, giving us a standoff. Rok-C flips out of a headscissors and takes a quick bow, followed by a cartwheel to escape again, meaning it’s another bow.

Alize pulls her out of the corner for a crash though, allowing her to chop away in another corner. Some running kicks in the corner rock Rok-C for two and we hit the chinlock (with Alize mocking some LET’S GO ROK-C chants). Back up and a hurricanrana gives Alize a slightly delayed two and it’s time for a double arm crank. Rok-C fights up and hits a middle rope Thesz press (with an actual press for a change).

Alize knees her down for two more, setting up a Go To Sleep for the same. A hanging DDT out of the corner gets another near fall and it’s off to something like a Crossface in the middle of the ring. The feet on the ropes get Rok-C out of trouble so they head outside with Rok-C hitting a suicide dive. Back up and Alize hits a running dropkick off the apron and another suicide dive leaves them both laying.

They dive in to beat the count and Rok-C wins a slugout, only to walk into a cutter. Rok-C is right back with a running shot to the face, leaving both of them down. The Crossface goes on again but this time Rok-C reverses into one of his own. That’s broken up as well so Alize hits back to back superkicks but Rok-C kicks her right back, setting up Code Red for the pin and the title at 18:15.

Maria Kanellis-Bennett presents Rok-C the title and her parents come in for the celebration.

More of the top five matches of the year:

From Ring Of Honor TV, September 15, 2021, this is another match of the year, featuring the Briscoes as the Tag Team of the Year.

Honor is shown before the match as we hear about the Briscoes’ history of troubles against luchadors. Bandido and Jay circle each other to start with Jay fireman’s carrying him to the mat for an armbar. That’s broken up and Bandido shows Jay the finger gun and starts flipping around to send us to a standoff/break.

We come back with Mark bringing Jay back in to elbow Rey in the face. A trip to the outside goes badly for the luchadors but Bandido comes back in with a springboard high crossbody to the Briscoes. Rey’s basement dropkick into a running shooting star press gives Bandido two on Mark but Jay is back in to run Bandido over. Mark kicks Bandido in the mask for two and then plants him down for a bonus. Bandido gets away for the tag to Horus though and the pace picks up.

A double chop into a double superkick gives Horus two with Jay having to make the save. Everything breaks down and we get a four way knockdown for a quadruple breather. Mark grabs an Iconoclasm for two on Horus but gets caught with a pop up cutter from Bandido. A Fosbury Flop takes Jay down and Horus flips Mark off the top for two. Back up and Jay sends Bandido outside, leaving Horus to get Doomsday Deviced for the pin at 12:10.

More matches of the year:

Jonathan Gresham is the Male Wrestler of the Year and here he is in action.

From Best In The World.

Gresham is defending and this is under Pure Rules, with an extended pay per view time limit. Cary Silkin of all people joins commentary as the fans seem split to start. An early lockup goes nowhere as they seem to be taking their time here. Gresham grabs a waistlock to start the grappling but gets taken to the mat without much effort. They pop back up with Bennett shouldering him down to make things seem a bit more serious.

The threat of a London Dungeon (seated armbar) sends Gresham going straight to the rope for the first break. Gresham pulls him down and starts cranking on the arm for some unnatural angles. An armdrag sets up a hammerlock and Gresham cranks on the other arm at the same time. Now it’s time to twist the ankle at the same time as Gresham’s confidence is going up. Back up and Gresham’s running shoulder hurts Bennett’s arm again.

The Kimura goes on so Bennett uses his first rope break in a smart move. Gresham is sent outside so Bennett tries a dive, only to get pulled back into the Kimura. Bennett taps to no avail before going back inside for another rope break for a bit of a weird sequence. Back up and Bennett goes for the arm as well, meaning Gresham needs his second break. Bennett uses the good arm to hit a Death Valley Driver for two and the seated armbar goes on again.

With that broken up, Bennett clotheslines him down but the arm gives out on a piledriver attempt. Another clothesline gets two on Gresham but the arm is banged up. Gresham is smart enough to use his feet to pop the arm and Bennett is in a lot of trouble. The Cobra Twist sends Bennett to the ropes for the third and final time so a pair of springboard standing moonsaults have Bennett knocked to the floor. Gresham adds a suicide dive but Bennett is right back up with a powerbomb for two.

That’s fine with Gresham, who pulls him into the Crossface. Somehow Bennett crawls out and rolls Gresham into the corner. The piledriver connects for three…but Gresham gets his foot on the ropes for his final break. Gresham switches it up and pops the knee this tine but Bennett stacks him up on a rollup attempt for two of his own. With the arm not working, Gresham ties him in a kneebar for the tap to retain at 19:21. 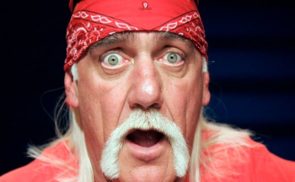 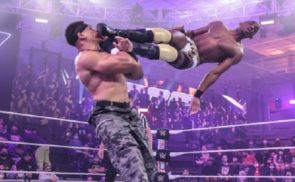