It’s time to get a bit more back to normal after last week’s major show. That could mean a few things this week, as AEW has a bit of a strange definition of normal. World Champion Hangman Page is here and we have a showdown between CM Punk and Wardlow, which means MJF will be around too. Let’s get to it.

Here are Adam Cole and ReDragon for a chat. Cole brags about how awesome the three of them are and how he is undefeated in singles action. ReDragon is the baddest team in wrestling….but here are the Young Bucks and Brandon Cutler to interrupt. Cole tries to play peacemaker and they all seem to be friends, because both teams are better than people like the Best Friends.

Cue the Best Friends and Orange Cassidy, with Cole calling their music stupid. The fight is on in a hurry but Cole hits Cassidy low. The beatdown is on but Kris Stadtlander comes in to stare Cole down. Britt Baker runs in to take Stadtlander out and the double kiss is loaded up, but Baker will take care of that too. A lot of posing ensues.

MJF is here with Wardlow. Punk drops to the floor to glare at MJF but Wardlow is waiting for him. Back in and Wardlow powers Punk into the corner so Punk comes back with a headlock. Some forearms take Punk down in the corner as the slow pace continues. Wardlow shrugs off a kick to the leg and tries the Powerbomb Symphony. Punk bails to the floor in a hurry though and we take a break.

Back with Punk escaping another Powerbomb Symphony and striking away to little avail. Clotheslines and strikes put Wardlow down to one knee and the springboard clothesline finally drops him. Punk’s right hands in the corner are finally countered into the first powerbomb and the Powerbomb Symphony is on. Five powerbombs connect…but MJF gets on the apron and says he wants more.

More powerbombs plant Punk again and he is mostly done on the apron. MJF wants Wardlow to powerbomb her through a table at ringside and gets just what he asks for, leaving Punk barely moving. Punk somehow manages to beat the count back in (with JR saying the count is being rather lenient)…where he small packages Wardlow for the pin at 14:06.

Post match MJF yells at Wardlow but Wardlow grabs his hand. Violence is teased but Shawn Spears runs in for the save.

Hobbs starts fast and throws Martin around on the floor before the bell. The spinebuster plants Martin no the floor and tosses him inside to keep up the beating. A big slam lets Hobbs rip at Martin’s face and a hard clothesline takes him down again. Martin slips out of a torture rack but Hobbs crushes him with a crossbody. Hobbs whips him hard to the floor where Ricky Starks can get in some stomping as we take a break.

Back with Hobbs still not being able to get the torture rack as Martin slips out for a springboard missile dropkick. Martin knocks him outside for a springboard corkscrew dive. They get back in where Hobbs runs him over, though their heads seemed to have collided. Starks tries to offer a distraction but Jay Lethal pulls Starks off the apron. Martin hits a quick Nose Dive for the pin at 10:07.

The Inner Circle is proud to have won the Faction Of The Year and are ready for Sammy Guevara to win tonight. Cue Eddie Kingston to say he has a bad knee but also to blame Jericho for Santana and Ortiz not being Tag Team Champions. Santana and Ortiz leave before things get more serious. Jericho says he’ll be down there in tonight’s main event and threatens Kingston if he is down there too.

Here is a livid MJF to say this isn’t happening and the match is happening next week. Next week, it’s CM Punk vs. SHAWN SPEARS!

Adam Cole, ReDragon and the Bucks aren’t happy with Kris Stadtlander, and now they have someone to deal with her. Cue Britt Baker so the challenge for the mixed tag is thrown out. No one can remember Brandon Cutler’s name, again.

Here is Hangman Page, in a Smokey the Bear shirt, for a chat. Page talks about spending ninety minutes in the ring with Bryan Danielson, where he has spent all kinds of blood. That’s not enough though because the new year means the records have been reset. He needs a new challenger so….here is Dan Lambert (Page: “Shoot me.”) to interrupt. Lambert talks about how Page never used his backstage connections like Cody Rhodes. He doesn’t like Page’s gimmick though, because there have been some great cowboys in wrestling history.

Anyone from the Carolinas or the Virginias trying to steal their clout comes off like they are full of cowboy s***. Page talks about growing up on a farm and then coming here instead of signing a $600,000 contract, which he calls cowboy s***. Cue Lance Archer to grab Lambert, who tells him not to miss his chance at being in the ring with the World Champion. Archer jumps Page and beats him down with a chair, setting up the Black Out through the open chair.

Arn Anderson is proud of Lee Johnson and his son Brock Anderson as a new tag team. They’re in Horsement Country but here are Tully Blanchard and FTR to say Arn is rather right. The challenge is on and Brock/Lee are in for next week.

We look at Jade Cargill winning the TBS Title and she promises to keep it.

Deeb jumps her from behind during the entrances and it’s a kendo stick to the knee. Shida kicks the stick away but gets kicked into the steps. She manages to get inside so Deeb unloads on her in the corner. A dragon screw legwhip out of the corner stays on the leg, allowing her to twist the knee around again. The knee is rammed into the mat to set up the Serenity Lock so the referee stops it at 1:59.

Post match the medic comes out to check on Shida but Deeb hits her with the kendo stick anyway. Referees come in to break it up and Deeb finally leaves.

Christian Cage and the Jurassic Express is happy with their Tag Team Titles. They’ll face any top five team so here are Alex Reynolds and John Silver, who were there in all of two seconds. The match is set for Rampage.

Private Party and Alex Abrahantes are here too. Before the match, Matt promises to send Penta to the hospital with his brother Fenix. We get DELETE vs. CERO MIEDO to start and that goes on for so long that JR is reminding us of the time limit. Penta kicks him in the ribs but gets hit in the back of the head. Back up and Hardy gets sent into the corner, setting up the running chop.

We take a break and come back with Penta hitting a gutbuster for two and hitting an Alberto double stomp out of the corner for the same. The Fear Factor on the apron is blocked and it’s time to slug it out instead. Instead Matt hits a Side Effect onto the apron for two and DELETING ensues. Matt misses the moonsault though and now the Fear Factor can give Penta the pin at 8:51.

Post match Penta calls out Malakai Black so here he is to unload on Penta with the kicks to the head. Black goes for the mask so here are the Varsity Blonds to help beat Black down. The fans chant for BRODY KING and the lights go out again….and here is BRODY KING to clean a lot of house.

Kris Stadtlander, with Leyla Hirsch and Red Velvet, is ready for Britt Baker next week. Hirsch thinks she’s selfish for not focusing on their six woman tag on Friday. Velvet tells them to get it together. Their opponents aren’t mentioned.

Max Caster’s rap brings up Novak Djokovich and blasts Sting/Darby Allin. Bear Country unloads on Acclaimed to start but Caster manages a high crossbody for a breather. We take a break and come back with Boulder not being able to hit a double chokeslam but being able to hit a double Downward Spiral. The Bear Bomb (JR: “Not the Bear Bomb!”) misses Caster so he snaps Bronson’s throat across the top. The Mic Drop finishes for Caster at 6:18.

Post match the lights go out again and here is Sting with the baseball bat. The distraction lets Darby Allin come in from behind for the big beatdown, including Sting beating on the boom box.

Pac shows us a bunch of photos of himself with no eyes. Malakai Black blinded him but now he sees everything.

Matt Hardy isn’t happy but here is Andrade El Idolo to suggest they can make a deal. They’ll talk elsewhere.

Guevara is defending, Chris Jericho and Eddie Kingston are at ringside and David Crockett is here to present the winner with the title (again). They go straight to the fight with Garcia punching him in the face to get an early breather. Sammy knocks him outside though and there’s the dive to take him down. Back in and the GTH is broken up and Garcia gets in a shot to the face to take over.

We take a break and come back with Sammy knocking him outside for a double springboard flip dive. They get back inside where Garcia hits a belly to back suplex for two (“covering with alacrity” according to Excalibur). Another GTH attempt is countered into a Scorpion Deathlock, with Sammy going straight to the ropes.

Sammy is back up with Cross Rhodes for two so he tries another springboard. This time Garcia is ready for him by countering into a choke, followed by a hard piledriver for two. Cue 2.0 to go after Kingston and Jericho before one of them gets up on the apron. That’s fine with Guevara, who sends Garcia into him, setting up the GTH to retain at 12:34.

Post match Jericho and Kingston go after 2.0, which leads to an argument between the two of them to end the show. 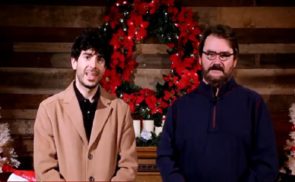 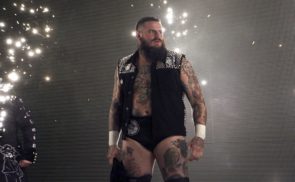