I’m not sure what to expect from this show these days and I’m also not sure if that’s a good or bad thing. The show has been far from terrible but there is something about it that feels inconsistent. Sometimes you get a good show but at times you get a show that leaves me counting the minutes until it’s over. Let’s get to it.

The Foundation gives Wheeler Yuta and Fred Yehi a fired up promo about bringing honor back. Tonight they’re going to shake things up a bit by having parts of the Foundation on both sides of a six man. Everyone else leaves and Jay Lethal says he and Tracy Williams will start, which is cool with Williams, who reminds Jay what happened the last time they were in the ring together (Tracy won).

Tony Deppen talks about how important Final Battle was for him because he has a newborn to provide for every day. He beat LSG to get to his TV Title shot against Dragon Lee and now he is going to do it again. They took different paths to get here but Deppen has the momentum here.

LSG talks about his journey starting fifteen years ago and he isn’t letting the flavor of the month take him out of this company. He is here to hang with the best and he knows Deppen can’t beat him again. LSG is Ring of Honor, but what about Deppen?

Deppen is getting this match due to fan response (part of Ring of Honor trying to listen to the people more). Going to the mat doesn’t last long to start so they trade some quick rollups for a variety of results. They’re on the floor for the slugout in a hurry before they go back inside, with LSG’s O’Connor roll being kicked out to the apron. Deppen hits a triangle dropkick to the floor but LSG sends him hard into the barricade. Back in and LSG grabs a neck crank as we take a break.

We come back with LSG missing an elbow drop but nailing a knee to the jaw. Something like a Gory Stretch has Deppen in more trouble but he’s right back with some slaps to the face. A basement dropkick sends LSG into the corner and Deppen gets two off some running knees in the corner. They slap it out until LSG hits Rock In Bye Baby (spinning faceplant) into a springboard spinning forearm for two.

A dropkick through the ropes rocks Deppen again but Deppen sweeps the leg from the apron. Back in and a brainbuster into a running knee gets two on LSG but the top rope double stomp misses. Some rollups give Deppen two each but LSG grabs a Gory Stretch….and flips Deppen forward into a sitout powerbomb for the pin at 11:57. Ian Riccaboni names it the Event Horizon and Caprice likes it.

The Briscoes are staring at each other with Mark being annoyed at Jay for going after EC3 instead of the Tag Team Titles. The whole thing is argued using a boat metaphor and they don’t seem happy.

Rush and Shane Taylor are ready for their World Title match in two weeks.

After an extended Code of Honor, Lethal and Williams start things off, as planned. The feeling out process begins until Williams takes him down into an armbar. They fight over half crabs with neither being able to get very far so Titus comes in to take Williams down. The mat grappling goes to another standoff so it’s off to Yehi. Titus gets wrestled to the mat and bails over to the ropes, meaning Yuta comes in for some arm battling of their own.

With that broken up, Gresham comes in and is taken to the mat by the leg. Gresham’s headscissors gets us to a standoff and Yuta’s armbar sends Gresham to the rope. It’s off to Lethal to face Gresham and they go straight to the mat as well. They spin around rather fast and that’s good for another standoff with commentary sounding out of breath. Lethal cartwheels out of a headlock and another one sets up a basement dropkick to Gresham.

Titus comes in to work on the arm and hands it back to Lethal. That doesn’t go so well for Titus as Lethal spears him down by mistake, allowing the hot tag to Yehi. A snap brainbuster gets two on Yuta, who has to go to the rope to break up the Koji Clutch. We take a break and come back with the Lethal Combination dropping Williams. Hail To The King gets two but Williams gets in a shot of his own for the double knockdown.

Gresham and Titus come in with Titus nailing a belly to belly for two. Gresham hands it back to Yehi, who is clotheslined into a jackknife rollup for two more. Everything breaks down and Lethal has to save Titus from the Koji Clutch. There’s the Lethal Injection to Gresham, who shoved Yehi out of the way since he isn’t legal. Titus dropkicks Yehi down for the pin at 17:47.

A lot of handshakes end the show. 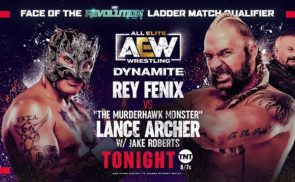 KB’s Review: The Champion We Need