We’re back in England and on the way to a bunch of big TV matches since there has not been any mention of a Takeover in forever around here. The big story at the moment is the upcoming Rampage Brown vs. Ilja Dragunov United Kingdom Title match, which is coming at some point in the future. Let’s get to it.

They go with the grappling to start with A-Kid taking him down with the headlock takeover. That’s reversed into an armbar but A-Kid flips out and grabs a cravate. Gradwell can’t flip his way out so he goes with a knee brace to the eyes to escape instead. We’re off to a face pull on A-Kid, followed by a heck of a running elbow to the face. There’s an overhead belly to belly for two and Gradwell is getting cocky. The Boston crab goes on but A-Kid slips out and kicks him in the head.

A high crossbody gets two on Gradwell and it’s a double knockdown for a breather. Back up and Gradwell gets pulled down into an omoplata, which is muscled up into a suplex for another break. One heck of a discus forearm puts A-Kid on the floor and a suplex sends him flying again. That’s good for nine so Gradwell hits him in the face for two more. The frustrated Gradwell hits him in the face but A-Kid pulls him into a cross armbreaker for the tap at 10:43.

We look back at Rampage Brown wrecking Flash Morgan Webster last week. Webster is on the shelf with a shoulder injury and it’s not clear how long he’ll be out of action.

Ilja Dragunov is ready for his title match with Rampage Brown. Yes Brown is a monster, but Dragunov embraces the pain. Legends are written about the people who make the monsters fall, so long live the Czar. The title match is in two weeks.

Samuels pats her on the head to start and gets headlocked for her condescending efforts. They trade wristlocks until James snaps off a hurricanrana. Samuels runs her over though and stands on James’ hair. Three straight backbreakers keep James in trouble and Samuels cranks on the leg so hard that James kicks herself in the back of the head. That’s enough to make James fight back up with some clotheslines and a dropkick but Samuels plants her with a reverse suplex. Back up and James grabs a quick small package for the surprise pin at 4:53.

Aleah James is very happy with her win but Isla Dawn attacks her and steals something from her gear.

Huxley throws him around to start so Williams grabs a less than successful headlock. That earns Williams a grab by the throat and some rams into the mat but Williams gets smart by going after the leg. Williams ties the leg in the rope for a running kick before cranking on both arms at once. Back up and Huxley sends him into the corner, setting up a running big boot to the face. A running crossbody against the ropes rocks Williams again so he crawls under the ring and slides back out to post Huxley from behind. Back in and Bad Luck finishes Huxley at 5:53.

Xia Brookside doesn’t like being told that she is late for training but she has a note from her dad.

Mark Andrews is happy with his win over someone as great as Nathan Frazer. Jordan Devlin comes in and tells him to start acting like more of an ace.

Joe Coffey is here with Gallus. Wolfgang throws Raja into the corner to start and it’s Mark coming in for an armdrag into an armbar. A shot to the face allows the tag off to Teoman, who gets armdragged as well. Gallus cleans house with monkey flips to the floor but Teoman ties Mark up in the apron to hammer away.

The villains take over and start the alternating stomps, including a variety to the shoulder. The chinlock doesn’t last long so Teoman runs Mark over for two instead. There’s a kick to the arm to keep Mark down and Wolfgang gets knocked off the apron. Mark doesn’t seem to mind though as he ax handles Teoman down and brings Wolfgang back in to clean house.

Everything breaks down and an enziguri into a Backstabber gets two on Wolfgang. An assisted DDT gets the same but Wolfgang hits a double clothesline. The assisted powerslam is loaded up but here is Charlie Dempsey of all people to jump Joe Coffey. The distraction lets Raja hit a jumping Downward Spiral to finish Wolfgang at 9:31. 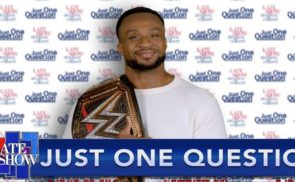