And it continues. According to Sean Ross Sapp of Fightful.com, WWE has released 8 more wrestlers from its roster. This is in addition to the many releases that took place a couple of weeks ago.

The names released are:

WWE has released eight members of its roster, per @SeanRossSapp

This means that WWE has released 26 wrestlers in the last 2 weeks. The last round of cuts included:

The company released this full match of John Morrison just a few days ago:

We will continue to monitor this story and provide more updates as they are available to us.

If I’m being honest, the only one on this list that really surprises me is Tegan Nox. She had a great thing going in NXT with Shotzi Blackheart, and I was hoping that they would keep that going on Smackdown. Once B-Fab was released from Hit Row, it shouldn’t come as a surprise that the rest of the group was a part of the releases. I don’t understand some of these decisions and I feel bad for everyone on this list, but there is some amazing talent here and I know that they will continue to find their way in the wrestling industry. 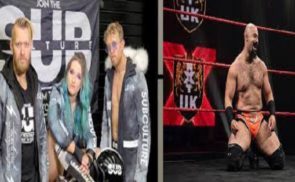