We’re back to the title picture this week with Meiko Satomura defending the Women’s Title against Isla Dawn in a World of Darkness match. I’m not sure what that means but NXT UK has enough of a track record that I can believe they’ll pull it off. On top of that, we get more of the build towards next week’s 200th show. Let’s get to it.

It’s time for Supernova Sessions, this time in the ring. Noam Dar says this is the first edition of Supernova Sessions 2.0, which makes me scared for this place’s future. This week’s guest is international superstar Lash Legend and, after taking some time to get her seated, Dar gives her something resembling a plant. Hold on though, as Samuel Sha brings in a much nicer bouquet, which she puts in the Heritage Cup.

Legend rhymes about how awesome she is and talks about being here to run through the competition. Dar has his another present for her in the form of a Lash video package, which Legend certainly likes. Then Dar tries to open a water but it seems to be soda and sprays all over him. With Dar dealing with that, Samuels looks at the odds for the incoming NXT exchange students having success around here, though he isn’t sure who Damon Kemp is.  Legend talks about how her physical abilities are like some animals and promises to leave everything else for the vultures. Now play the funky music.

Sid Scala talks about finding challenges for the Tag Team Titles, with a triple threat title match coming up. Von Wagner comes in to shake Scala, but Sam Gradwell says he’s here to do that. A match seems likely.

In the back, Damon Kemp comes up to Sha Samuels and Lash Legend. That’s enough to get Legend to leave so Kemp can complain about being a 400/1 underdog on Samuels’ odds.

Turan is a masked guy and kind of skinny. Mayfairs’ wristlock is flipped away to start and Turan cartwheels over him, setting up a butterfly suplex. A high crossbody gives Turan two but Mayfairs pulls him out of the corner for a crash to take over. That doesn’t last long as Turan chops him down a few times and scores with a middle rope dropkick. Turan hits a Swanton for the pin at 4:05.

Gallus runs into Oliver Carter/Ashton Smith and they both seem to want the Tag Team Titles. They’ll meet next week in one of the #1 contenders matches.

Video on some of the NXT UK stars who have moved on to become NXT/main roster stars.

Nina Samuels doesn’t like Nile stealing her spotlight and she’ll do something about it next week.

Kemp wrestles him down to start but Jones slips out. Jones grabs the arm but is quickly reversed into a gutwrench suplex. A clothesline drops Kemp and the neck crank is on, only to have Kemp come up with some overhead belly to belly suplexes. Kemp hits a Regal Roll, setting up a running powerslam to finish Jones at 4:26.

Post match Sha Samuels runs in to beat Kemp down.

Tiger Turan is celebrating his win but here is Kenny Williams with wanted posters, apparently thinking that Turan attacked him last week.

Die Familie is on their roof and talk about their upcoming matches, with Charlie Dempsey facing A-Kid and Teoman/Rohan Raja wanting the Tag Team Titles.

Video on Jordan Devlin vs. Ilja Dragunov for the United Kingdom Title next week. Devlin talks about his dad telling him to be whatever he wanted, but to be the best. They had their first match but it wasn’t quite how Devlin wanted it. Now it’s time for the title match, but also Loser Leaves Town to make it more interesting.

Satomura is defending in a World of Darkness match, which means a street fight with the lights dimmed. We get the Big Match Intros, but this time Satomura jumps her before the bell to start fast. Dawn kicks her out of the air to little avail as Satomura kicks her to the floor. The apron kicks are blocked though and Dawn busts out a broom. Some shots with said broom have Satomura in trouble so Dawn kneels to make some thunder and lighting go off.

Back in and it’s time to open up Dawn’s box of trinkets and pull out Dani Luna’s hair. The hair is wrapped around Satomura’s eyes but she fights up, steps on the box, and starts kicking away. A spinwheel kick gives Satomura two but Dawn catches her on top with some chair shots. The backdrop driver onto the chairs is broken up though and Satomura kicks her out to the floor.

That works for Dawn, who whips out a rope/cord and ties Satomura to the post. Some whips have Satomura in trouble until she kicks her way to freedom. Dawn misses a dropkick into the steps, allowing Satomura to get in a kendo stick shot back inside. The cartwheel knees to the back let Satomura swing the stick again but Dawn is back with a Tarantula. The top rope rope Meteora onto the chair gives Dawn a delayed two (thanks to her banged up knees) and it’s time to set up some chairs. Dawn can’t suplex her through the chairs and it’s Scorpio Rising to retain the title at 12:49.

Satomura celebrates to end the show. 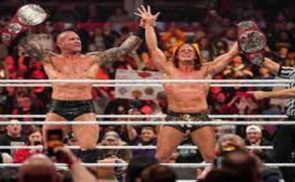 WWE Is Bringing Back A Classic Show Next Month For NXT