It’s time for a title match as we have A-Kid defending the Heritage Cup against Tyler Bate in their rubber match. That alone should be enough to carry the show but we should be getting some other good stuff around here to make the rest of the show work. If it is like their recent efforts, everything should be fine. Let’s get to it.

We open with a video on A-Kid vs. Bate, with Bate becoming a huge star and A-Kid needing to become his own man. Bate needs to win something to get back on top and it’s time for a showdown.

They trade cravates to start as we hear about their various European championships. Brown hits a dropkick but gets whipped hard into the corner to put him down as well. It’s already time to go outside for the slugout with Wolfgang sending him into the post. A backbreaker gives Wolfgang two back inside and we hit the bodyscissors to stay on the ribs.

Some shots to the knee get Brown out of trouble but Wolfgang gets up for a middle rope splash to the back. Brown Samoan drops his way to freedom but Wolfgang is right back with a spear for two. Another spear hits knee though and Wolfgang is sent hard into the post. A lariat sets up the doctor bomb to finish Wolfgang at 6:19.

Ashton Smith was working at the Performance Center when Teoman came in. He asked where Oliver Carter has been lately and accuses Smith of forgetting about his family.

Aoife Valkyrie is training in the woods because now she knows what failure feels like. Now it is time to look forward and fly.

Rampage Brown is a little banged up but runs into Gallus. Joe Coffey says he’ll let Brown have some time to heal up and then come looking for him.

The angry Brookside goes for her in the corner to start but can’t get anywhere. Brookside takes her down by the arm and starts cranking away but gets pulled outside. Amele drives her back first into the apron and it’s time to go back inside for some stomping to the back. Brookside fights up with a running hurricanrana for two but Amele snaps off a northern lights suplex for the same. A kind of spinebuster plants Brookside for the pin at 4:42.

Nathan Fraser isn’t happy with Sha Samuels messing with him as of late so he takes Samuels’ notes from him. We have a match set for next week.

We recap Meiko Satomura becoming #1 contender for the Women’s Title, meaning champion Kay Lee Ray laid her out as a result.

It’s time for Supernova Sessions. Noam Dar wastes no time this week and brings out Ilja Dragunov for a chat. For the sake of Dragunov not going insane, Dar puts up some videos of waterfalls and they both have nice, comfortable robes. Dragunov’s looks to be more like a kid’s version though and he doesn’t look pleased. Dar brings up the loss to Walter, with Dragunov talking about the violence and anger that has come with the loss. He isn’t that person anymore though, but Dar brings up some of Dragunov’s recent acts of violence.

However, Dar wants to fix things up a bit, so he has a stuffed dog named Lenny. That’s too far for Dragunov, because Dar must think this is funny. Violence is teased, but Dar says he thinks this is an act. Dragunov walks out and Dar looks annoyed as the music plays.

A-Kid is defending and Trent Seven is Bate’s corner man. Round one begins with a feeling out process as they both seem a bit tentative. A-Kid flips out of headlock and nips up to an early standoff. Bate takes him down by the arm but A-Kid reverses into a wristlock of his own. A monkey flip doesn’t get Bate out of trouble and the wristlock stays on. Bate finally flips out and it’s another standoff to end the round fairly evenly.

Round two begins with A-Kid grabbing a headlock takeover but Bate kicks his way to freedom again. A-Kid has to flip out of a headscissors and cranks on both arms at the same time. Another escape gives us yet another standoff so Bate grabs a headlock to end the round with a minor advantage.

Round three begins Bate slapping on an armbar but getting countered in a hurry. Bate tries to pick up the pace and slides through the legs so A-Kid drops down onto him for a sleeper. That’s broken up and they trade rollups until A-Kid blasts him with a diving forearm to the jaw. Bate uppercuts him to the floor as the pace has picked up in a hurry. Back in and Bate pops him in the jaw but they both crash over the top to end the round on the floor.

Round four begins with Bate charging across the ring for an uppercut to the jaw. A-Kid dropkicks him right back and a fisherman’s suplex gets two. Bate knees him in the face but a middle rope elbow is countered into a backslide. The airplane spin goes on so A-Kid reverses that into a Crossface attempt. A-Kid goes with the sleeper instead so Bate drops him back onto the mat for the break. A guillotine has Bate in trouble but he muscles A-Kid up into a suplex for two as the round ends.

Round five begins with both guys banged up and Bate powers him to the mat for an early two. A bridging German suplex gets two on A-Kid and the Tyler Driver 97 is good for the same. Spiral Tap misses and A-Kid grabs a cross armbreaker, which he switches into a Rings of Saturn with his legs. Time expires just in time though and Bate survives again.

Round six (the final round) begins with Bate in pain but being able to hit the rebound lariat. The Tyler Driver 97 is countered into a hurricanrana for two so Bate blasts him with a right hand. That earns him a superkick into a rollup but Bate drops down into a cradle for the pin and the title at 58 seconds of the sixth round (18:58).

Post match A-Kid is disappointed but presents Bate with the trophy and applauds to end the show. 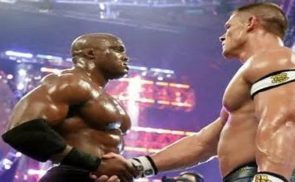