We are a little over a month away from Deadline and for reasons I don’t quite grasp, Von Wagner is next in line for the NXT Title shot. The good thing is that match is set for next week so it won’t drag down a major show, but we could be in for a rough two weeks. Hopefully the rest of the show can balance it out. Let’s get to it.

Gacy, now in regular trunks instead of his full body gear, has the rest of Schism with him and gets knocked into the corner to start. Grimes fights his way out of some quick trouble and elbows Gacy in the face. Back up and Grimes slips out of a fireman’s carry and knocks Gacy outside as we take a break.

We come back with Gacy stomping away and we hit the Crossface. That’s broken up and Grimes gets in a knockdown. After stomping on Reid’s hand at ringside, Grimes hits a high crossbody for two. Gacy bails to the floor and there’s the big running flip dive to take out a bunch of Schism. Back in and an Ava Raine distraction lets Gacy hit the handspring lariat for the pin at 10:45.

Nathan Frazer tells Axiom that he’ll be out of action a bit longer due to his injuries. JD McDonagh comes in to say Frazer knows nothing about pain so Axiom mocks McDonagh for losing a lot. A match is made for later.

And now, to the Barber Shop with Carmelo Hayes not worrying about the haters saying he didn’t get his North American Title back. He and Trick Williams aren’t worried about Wes Lee and don’t care for their barber being something of a fan. Apparently the contract signing is in two weeks.

Lopez gets knocked outside to start but she’s right back with a heck of a clothesline to take over. Ruca tries to fight back with some shots to the face and manages to stagger Lopez, only to get slammed off the top. A chokebomb finishes for Lopez at 2:58.

Post match Indi Hartwell runs in to brawl with Lopez.

We get a video call between Toxic Attraction with Jacy Jayne being worried about showing up because Alba Fyre might hurt them. Then Fyre (who Jayne thought was a cop) pulls her out of the car and promises to come for Mandy Rose next week.

The rest of Chase U is here too. Dempsey takes him to the mat to start but Chase is back up with a front facelock. Chase can’t get an armbar but he can hit the spelling stomps. That’s broken up and Dempsey pulls him into a leglock, followed by an STF. That’s enough for Duke Hudson to throw in the towel at 2:48, despite Chase being right next to the rope.

Kiana James and her assistant come into Fallon Henley’s bar where Josh Briggs and Brooks Jensen are in lust. James is trying to buy the place but Henley isn’t interested. She has a lot of memories and isn’t taking the deal, as James wants to build an apartment complex.

Tony D’Angelo is here with Stacks. Walker gets taken down to start and hammered in the back as commentary talks about Logan Paul. A knee to the head gives Stacks two but Walker gets fires up and runs Stacks over. Stacks pokes him in the eye and gets two off a rollup before dropping Walker with a running knee to the back of the head for the pin at 3:11.

It’s time for the Grayson Waller Effect with Von Wagner, with Mr. Stone, and Bron Breakker as guests. The fans writing in don’t seem to like Wagner and he doesn’t care what they think. Wagner brags about how great he is but Breakker says try jumping him face to face. Breakker lists off all of the people who have been impressed by him or taken out (Breakker: “Apollo Crews. There I said your name, you happy now?”) and violence is teased but they just stare at each other instead.

Cora Jade isn’t scared of Wendy Choo, who doesn’t have any friends and no one cares about her.

Apollo Crews is in Nigeria as part of a WWE talent search but he hasn’t forgot about Bron Breakker.

Axiom takes him down for an early double arm crank to start and McDonagh is looking frustrated early. McDonagh tries to fight up but can’t get anywhere with him. A trip to the floor has McDonagh even more annoyed and we take an early break as seething ensues. Back with Axiom hitting a heck of a springboard moonsault to the floor but he comes up holding his knee.

Back in and McDonagh gets caught in an armbar and has to go to the ropes for the break. McDonagh starts going after the leg but Axiom is able to get back up with a shot to the head for a double knockdown. It’s McDonagh up first anyway but his moonsault is pulled into a triangle choke.

That’s broken up as well but Axiom’s knee gives out on a superkick attempt. This time Axiom pulls him into a choke, which is reversed into a VERY bendy kneebar, which is enough for the referee to break the hold because Axiom is screaming so hard. Axiom begs him not to stop it but the doctors say it’s over at 13:45.

The rest of Diamond Mine is here and we have a five minute time limit. Brutus jumps Kemp in the aisle to start the fight fast before heading inside for the bell. The fight is on fast with Brutus knocking him around and then outside. Kemp gets pulled back to the floor and hammered onto the announcers’ table before they head back inside. Brutus sends him shoulder first into the post before grabbing a chair. That’s taken away though and Brutus blasts him for the DQ at 2:46.

Result: Damon Kemp b. Brutus Creed via DQ when Creed used a chair (2:46)

Post match Creed hits him with the chair again but Veer and Sanga are looking at Diamond Mine from the balcony.

T-Bar is still coming back and promises his form of justice.

Roxanne Perez offers an ear to Indi Hartwell if anything is wrong but Hartwell says there are no friends in this business. It doesn’t work that way.

Carter/Chance are defending. Chance takes Stark down to start but Stark sticks the landing on a monkey flip. Lyons comes in to work on Carter’s arm but Carter is back up with a running dropkick to send Stark outside. We take a break and come back with Stark holding Chance in a Stretch Muffler. That’s broken up and it’s back to Carter, who hits a big dive to take out both challengers at once.

Chance comes back in and kicks Lyons into the corner for the tag off to Stark. A suplex gets two on Chance, even with Lyons cutting Carter off from making a save. Chance Stundog Millionaires herself out of trouble and everything breaks down. Stark almost clothesline Lyons by mistake and Lyons even takes the bullet of a double superkick for her. A superkick drops Carter but the champs are back up and the 450/neckbreaker combination retains the titles at 11:04.

Post match respect is shown but Stark hits Lyons with a title to split the team up. 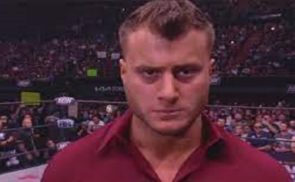