The normal trend of this show is likely to continue this week as we have three more matches between people who aren’t usually going to make it to NXT proper. That can make for some acceptable background noise but rarely much more than that unfortunately. You get used to the concept though so let’s get to it.

They go to the mat to start and it’s a pair of standoffs before Henley grabs the armbar. An exchange of rollups get two each and Barlow wants her to bring it. Back up and they fight over a lockup until Barlow starts working on the arm instead. She cranks on the neck as well but Henley fights out with a faceplant. A running knee finishes for Henley 4:22.

They grapple around to start with neither being able to get the better of things. Paxley slams her down (while throwing in a squat) and it’s time to crank on the arms. Another slam is countered into a headlock takeover though and Jacobs hits a running boot for two. The chinlock keeps Paxley down but she is back up with a butterfly suplex. Jacobs gets caught in an electric chair, with Paxley spinning her around into a powerbomb and floating over for the pin at 5:52.

Blade works on Chen’s arm to start before a dropkick gets two. Enofe comes in for a basement 619 for two before we hit the headlock. It’s off to Bernal for a splash in the corner but Enofe powers him into the other corner. That means Blade can come in to miss a charge in the corner, allowing Chen to grab a chinlock.

Bernal adds an atomic drop for two and the chinlock goes on again. Blade finally rolls underneath a clothesline and brings Enofe back in to clean house. A top rope elbow gets two on Chen and Enofe can’t believe it. He’s so stunned that he hits a reverse Sling Blade setting up an assisted elevated Stunner to finish Bernal at 7:03. 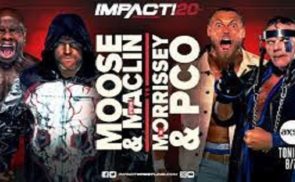 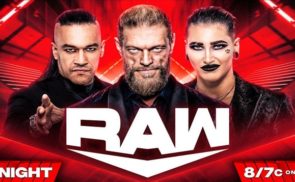