NXT In Your House 2022 Live Coverage And Results

We’re back with another special show as NXT gets in on another WWE pay per view weekend. This time around they’re dusting off another classic with In Your House, which has very little to do with what we’ll be seeing. The card is fairly short but there are five titles being defended, making it pretty stacked at the same time. Let’s get to it.

The opening video is based on the old In Your House intros, complete with Todd Pettingill doing the voiceover to run down the card. Joe Gacy gets to come through the house’s door and lights a poster on fire.

The losing team has to join the winners. During Legado’s entrance, the referee finds a crowbar, which seems to have been planted by D’Angelo and company. We also get a video with Tony Gallante narrating about how this is about controlling the streets and imposing their will. Wilde and Two Dimes start things off with neither being able to get very far.

Wilde sends him into the ropes to pick up the pace before handing it off to Escobar vs. D’Angelo. Everything breaks down early (that’s well received) and we settle down to Two Dimes getting caught in the corner for a running kick to the face. Del Toro loads up a springboard but gets shoved out to the floor for the crash. Back in and Stacks gets to stomp away, with D’Angelo getting to do the same. A suplex gives D’Angelo two and Stacks grabs the chinlock with a knee in the back.

That’s broken up and del Toro is able to bring in Escobar to clean house. Everything breaks down and del Toro/Wilde hit stereo springboard dives to the floor. Escobar loads up a super hurricanrana but Stacks makes the save to send him crashing to the mat. Wilde comes back in for the running kick to the face/Russian legsweep on Two Dimes with Stacks making the save. The six way slugout is on but D’Angelo’s crowbar is knocked away. Wilde crowbars Stacks but D’Angelo gets in a brass knuckles shot to knock Wilde silly. Stacks, out on his feet, is shoved onto Wilde for the pin at 13:28.

Reality sets in fast for Escobar and he isn’t happy.

A bunch of the women are watching the Alba Fyre video and Lash Legend is really not impressed.

Toxic Attraction, who arrive in a car in the back, is defending but it’s Jayne getting taken into the corner for some early kicks to the ribs. Dolin comes in off a blind tag though and the choking is on in the corner. Chance fights out of a chinlock and something like Private Party’s Silly String takes Dolin down for a change. The hot tag brings in Carter to clean house but Jayne gets in a shot from behind to take her down.

That doesn’t last long as Chance comes back in with a superkick before super hurricanranaing Jayne onto Dolin for two. Everything breaks down and the champs go high/low on Chance, with Carter shoving Doling into the cover for the break. The 450/neckbreaker combination gets two on Dolin with Jayne making the save this time. Jayne gets in a cheap shot on Carter, who is knocked into a half and half suplex from Dolin to retain the titles at 9:00.

Result: Toxic Attraction b. Kayden Carter/Katana Chance – Half and half suplex to Carter (9:00

Hayes, with Trick Williams, is challenging. Feeling out process to start until Grimes grabs a backslide for two, giving us a standoff. The threat of the Cave In sends Hayes into the corner so Grimes kicks him down for two. A high crossbody gives Grimes the same but Hayes trips him onto the apron to take over.

Back in and Hayes takes him into the corner before suplexing him back out for two of his own. Hayes argues with the referee long enough that Williams can tie Grimes’ wrist to the middle rope. That lasts all of three seconds before a tilt-a-whirl faceplant drops Grimes for two more. A hurricanrana out of the corner gives Grimes a breather and he plants Hayes for two of his own. Grimes superkicks him for two more, with Hayes grabbing the rope this time.

Back up and the flipping powerslam gives Grimes another two so it’s time to load up the Cave In. That is broken up (as Grimes wasn’t even running) with a kick to the head but Grimes hits a poisonrana. Grimes’ running flip dive takes down Williams and Hayes on the floor. Back in and Williams offers a distraction, allowing Hayes to drop Grimes face first onto the buckle. The top rope ax kick gives Hayes the title back at 15:28.

Joe Gacy is ready to take care of the present and future by winning the NXT Title. Maniacal laughter ensues.

We recap Wendy Choo vs. Mandy Rose for the Women’s Title. Rose is tired of being told that she doesn’t deserve to be the champion and now she is ready to keep the title from someone as ridiculous as Choo.

Choo is defending and we get a dream sequence of her spraying Toxic Attraction with water guns and then winning the title. We get the Big Match Intros, allowing Choo to shoot a slingshot at Rose. That earns Choo a beating in the corner but she fights right back out. Choo misses a running elbow though and a snap suplex gives Rose two. The bodyscissors goes on for a bit, followed by a reverse t-bone suplex for two on Choo. The abdominal stretch is broken up and Choo grabs a rollup for two.

Some strikes and a clothesline put Rose down and Choo knocks her to the floor. Rose manages a spinebuster on the floor for a nine count, followed by a spinebuster for two back inside. We now pause for Rose to tear up Choo’s pillow, which annoys Choo so much that she hits a dropkick to start the angry comeback. Choo unzips her track suit to reveal a Toxic Attraction shirt before grabbing the sleeper. Rose makes it over to the rope so Choo goes up, only to get slammed back down. The running knee retains the title at 11:04.

Roxanne Perez and Tiffany Stratton are both ready for the Women’s Breakout Tournament final, though Stratton thinks the interviewer is the WORST PERSON EVER for thinking Perez might win.

Quick video on the Creed Brothers, showing a time line of their lives and success.

Pretty Deadly is defending and if the Creeds lose, they’re out of Diamond Mine. Brutus powers Wilson around to start and wrestles him down a few times with little trouble. Back up and Wilson manages to get him into the corner for the tag to Prince, who is wrestled down as well. Everything breaks down and stereo German suplexes drop the champs again.

A stretch muffler to Prince and an ankle lock to Wilson have them in more trouble but both are escaped before it gets too bad. Back in and Prince runs Julius over before Julius clips him on a leapfrog attempt. An armdrag into an armbar has Prince in trouble but he slips out as well. Wilson comes back in and gets kneed in the ribs over and over for his efforts. Everything breaks down and the Creeds throw the champs around, including slamming Wilson off the top.

Julius goes out after them and is quickly Rock Bottomed onto the steps to put him in trouble for the first time. Back in and the armbar goes on Julius, setting up a Boston crab to stay on the back (and send a message to Roderick Strong at the same time) even more. Julius powers up and knocks Prince down, allowing the tag off to Brutus.

House is cleaned, including Brutus’ top rope elbow to a standing Prince for two. Hold on though as Julius teases using a title (as slid in by Prince), only to look at his dad in the crowd. Julius throws the title down and instead Brutus slams Wilson, setting up a shooting star press. The sliding forearm gives the Creeds the pin and the titles at 15:07.

The Great American Bash is on July 5.

We recap Bron Breakker vs. Joe Gacy for the NXT Title. Breakker defeated him to retain the title but Gacy has gone supervillain and tried to make him snap. This gives Gacy a rematch, and if Breakker gets disqualified, he loses the title.

Gacy, with minions, is challenging and if Breakker is disqualified, he loses the title. Breakker goes right at him to start but has to pull back from going too nuts. Gacy is knocked outside so Breakker grabs a chair to help him with the minions, allowing Gacy to post him. Back in and Gacy runs him over again, setting up the chinlock to keep Breakker in trouble.

Gacy sends him face first into the buckle and then drops Breakker onto the rope for two. Brakker fights up again but this time gets pulled into a chinlock with a bodyscissors. With that not working, Gacy goes up top but gets knocked out to the floor. That’s ok with Gacy, who comes right back to set up another chinlock. That’s broken up as well and Breakker starts the comeback, including sending Gacy to the floor.

That means the big flip dive so here is one of the minions on the apron. Gacy grabs a chair and hits the mat before throwing it to Gacy ala Eddie Guerrero. Cue another referee to say not so fast, meaning the match continues, with Breakker knocking Gacy off the apron and through the announcers’ table.

Replays and posing wraps us up.

Opinion: This Is Tony Khan & AEW’s Sink Or Swim Moment 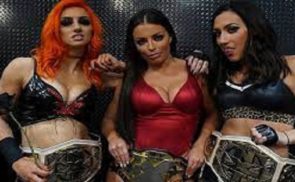 And NEW: Multiple Titles Change Hands At NXT In Your House