We open with the Bloodline (minus Roman Reigns/Paul Heyman) wrecking havoc at ringside. Sami Zayn says they’re taking over tonight but here is Kevin Owens to interrupt. Sami calls this a hostile takeover but Owens says he wants to punch Zayn in the face. Cue Adam Pearce and company to tell Owens that this isn’t happening tonight or all year. Security goes after the Bloodline but gets dropped, drawing Owens into the ring. Some low level stars run in to go after the Bloodline and the team is chased off. Pearce says if the Bloodline is here, they’re going to be in a match tonight.

Bianca Belair is ready to face Alexa Bliss, no matter what kind of Bliss she is.

Post break the wrestlers who chased the Bloodline off want some matches, with Elias demanding a fight against Solo Sikoa. Works for Adam Pearce, as does the Street Profits/Kevin Owens vs. the Usos and Sami Zayn in a six man tag.

Belair is defending and wastes no time in hitting Bliss in the face to start. They head outside with Belair sending her into the barricade as we take a break. Back with Belair running her over with a shoulder and telling Bliss to bring it on. Bliss sends her into the corner, takes a bow, and stomps away.

Belair is back with some right hands and muscles Bliss up with a suplex to block a DDT attempt. Some forearms to the back have Bliss rocked but she sends Belair to the floor, setting up the running flip dive off the apron. We take another break and come back again with Bliss putting on a chinlock.

With that let go, Bliss’ standing flip dive is countered into a rollup but Bliss counters the KOD. Belair muscles her down into a backbreaker and hammers away in the corner. Bliss gets smart by pulling her out to the floor by the hair….where there is a man in a Bray Wyatt style mask. That’s enough of a distraction for Bliss to throw her back in….but there is another man in a Bray Wyatt mask (different hair).

Austin Theory is ready for Seth Rollins because he is the future and Rollins is the past.

Street fight. Elias promises to show Sikoa what WWE stands for and we’re ready to go, with music themed weapons at ringside. Sikoa powers him into the corner to start and hits a hard clothesline to take over. They head outside with Elias missing a guitar shot but sending Sikoa right through a drum kit. A drum cymbal to the head knocks Sikoa silly and we take a break.

Back with Elias being sent into a speaker near the entrance, followed by some mic shots to the head. They get inside again with Elias’ electric keyboard shot being shrugged off, allowing Sikoa to grab a Samoan drop for two. Another keyboard blast gives Elias two and some tambourines to the head send Sikoa into the corner.

A musical celebrity (Hardy, who sings the Royal Rumble theme song) gives Elias a guitar but Sikoa hits a superkick. Hardy gets in and hit guitar shot to the back has no effect. That’s enough for Hardy to run off, leaving Elias to hit the jumping knee. A top rope guitar shot is Samoan Spiked out of the air, leaving Sikoa to Spinning Solo Elias through a piano for the pin at 14:21.

We look at John Cena and Kevin Owens defeating Roman Reigns and Sami Zayn on Smackdown.

The brawl is on before the bell with the non-Bloodline taking over. We get the official start with Jimmy getting a shot on Dawkins, allowing Sami to come in for a front facelock. That doesn’t last long either as it’s off to Owens, who takes over on Jey while yelling at Jey. Ford is up but doesn’t want to tag in as he is worried about Bianca Belair. Owens gets stomped down in the corner and we take a break.

Back with Ford coming in off the hot tag to clean house, including a standing moonsault for two on Zayn. Everything breaks down and Dawkins runs Jey over in the corner. Ford is back with the running flip dive onto Jimmy and Zayn but here is Solo Sikoa to take Dawkins out. Owens goes after him but gets superkicked, leaving Zayn to Helluva Kick Ford for the pin at 11:40.

Post match the beatdown stays on but Sheamus and Drew McIntyre run in for the save.

AJ Styles is confirmed to have a broken ankle, meaning he will miss the Royal Rumble.

Otis is here with Gable, who runs away from Dexter to start. After hiding behind Otis doesn’t work, Gable grabs a hot shot for a breather and starts in on Lumis’ arm. A northern lights suplex gives Gable two but Lumis is back with a takedown of his own. Gable grabs a German suplex and sends Lumis outside, where Lumis gets posted. Otis misses a clothesline into the post though, leaving Lumis to counter La Majistral into a cradle for the pin at 4:09.

Video on Cody Rhodes’ return last year, including the injury which took him back out of action. More on this later.

Here is Damage Ctrl for a chat. Bayley brings up the team starting here at Summerslam so it is nice to have one good thing come out of this city. However, we need to talk about the Iris elephant in the room. Bayley beat Becky Lynch, which brings out Becky to tell Bayley to shut up. Becky talks about Bayley having to get out of someone’s (unnamed) shadow and now she has own team. It is going to be a matter of time before the rest of Damage Ctrl turns on her but Bayley rolls it off. The challenge it out for tonight but Bayley shuts that down too. Instead, Becky can just fight the rest of the team, 2-1. Sure.

Non-title and Bayley is at ringside. Becky Stunners Sky over the middle rope to start and nails an enziguri to drop her for two. Kai comes in and gets legdropped, followed by a running forearm in the corner. A kick to the face staggers Lynch though and Sky sends her into the apron on the floor. The double teaming is on, including Sky front facelocking Becky on the floor. Cue Michin to join Becky though and the hot tag brings her in to start the house cleaning.

We take a break and come back with Sky Crossfacing Michin, who powers up and kicks Sky into Kai for a tag. A neckbreaker drops Sky so Kai grabs Becky’s ankle…and Michin makes the tag anyway. Everything breaks down and Becky hits a missile dropkick. A double superplex hits Kai with Sky having to make the save. Becky goes outside to deal with an invading Bayley, leaving Michin to Eat Defeat Kai. That leaves Michin down long enough though for Sky to hit Over the Moonsault for the in at 13:40.

Result: Damage Ctrl b. Becky Lynch/Michin – Over The Moonsault to Michin (13:40)

Alexa Bliss, with what looks like some dried paint on her face, says she has control of Bianca Belair.

We look at Dominik Mysterio being arrested on Christmas Eve for invading the Mysterios’ house.

Dominik Mysterio, having since been bailed out of jail by Rhea Ripley, talks about how prison is an absence of feeling. This isn’t a game to him and he’s just getting started, so he’ll see Rhea Ripley soon.

Theory is defending. Rollins grabs a headlock to start before clotheslining Theory outside. A knee to the face rocks Theory again and we take a rather early break. Back again with Rolling firing off the fast chops but Theory gets in a shot of his own. The rolling dropkick to the back gives Theory two and he hammers away with left hands. A clothesline sets up a chinlock on Rollins to keep him in trouble. They head outside with Rollins being rammed into the announcers’ table a few times as we take a break.

Back with Rollins Hulking Up and hitting a backbreaker for two. Rollins catches him on top but Theory slips out of a suplex. The brainbuster onto the knee is reversed into a small package to give Rollins two more. The buckle bomb is broken up as well and Theory goes up, only to get superplex into…well nothing actually as Theory reversed into a brainbuster own for two.

They trade kicks to the face until an enziguri drops Theory. Rollins can’t follow up so it’s a double breather. Back up and Rollins wins a strike off, setting up the missed Stomp. Theory tries to leave but gets caught, allowing Rollins to hit a superkick back inside. The frog splash gives Rollins two but Theory shoves him into the referee. Rollins’ knee gives out as he escapes a suplex, though he’s fine enough to hit a Pedigree for a delayed two from a second referee. Theory tries to send Rollins into the referee again, allowing the low blow to cut Rollins off. A chop block sets up A Town Down to retain the title at 22:15.

Results
Alexa Bliss vs. Bianca Belair went to a no contest when Bliss attacked the referee
Solo Sikoa b. Elias – Spinning Solo through a piano
Bloodline b. Street Profits/Kevin Owens – Helluva Kick to Ford
Dexter Lumis b. Chad Gable – Rollup
Damage Ctrl b. Michin/Becky Lynch – Over The Moonsault to Michin
Austin Theory b. Seth Rollins – A Town Down 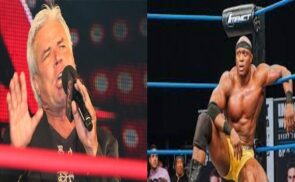 By Association: Eric Bischoff Explains How Another Wrestler Cost Bobby Lashley His Job