We have less than three weeks to go before Wrestlemania and WWE still has a lot of work to do before the show. The big story coming out of last week was Kevin Owens challenging Steve Austin to meet him at Wrestlemania, with Austin accepting the next day. Other than that, it’s time to hear about how wrestlers have no path to the show. Let’s get to it.

In Memory Of Scott Hall.

We open with a look at Kevin Owens’ challenge and Austin accepting.

Here is Kevin Owens, who opens with a Hey Yo. He is the happiest Canadian right now because he is going to the main event of Wrestlemania Saturday night. Owens used his superior Canadian intellect to get what he wanted. This draws a USA chant, with Owens saying that everyone, including the USA, will get to see Owens take Austin out. The only can that will be opened is a can of Canadian beer after Owens kicks him from one side of Texas to the other. Owens hits a Stunner on the cameraman and walks out.

Non-title but hold on as here is Austin Theory to interrupt. After looking at a clip of Theory’s issues with Pat McAfee, Theory joins commentary. Balor hits his shotgun dropkick in the corner, followed by some shoulders to the ribs. The standing double stomp misses but Balor hits another basement dropkick. Priest is right back up and takes Balor outside for the big release Razor’s Edge onto the announcers’ table.

We take a break and come back with Priest cutting off another shotgun dropkick with a kick to the head. Balor slips off the shoulder though and hits another shotgun dropkick, only to have Theory break up the Coup de grace. An enziguri puts Priest down, but Balor dropkicks Theory instead of going after him. Back in and Priest hits the Reckoning for the pin at 7:29.

Post match Theory hits the ATL on Balor, setting up the selfie.

Seth Rollins has nothing to say about his lack of a path to Wrestlemania.

Apollo Crews is here with Azeez. We get the big lockup to start and they shove each other around. Omos knocks him outside and then clotheslines him over the top as well. A Crews distraction lets Azeez snap Omos’ throat across the top rope but Omos counters a suplex into a suplex slam. The chokeslam finishes Azeez at 1:54.

Kevin Owens comes up to Seth Rollins and talks about how he needs to come up with something else. Owens talks about the things that Rollins has done at Wrestlemania and offers to help him get to Wrestlemania. Rollins cuts him off and seems to have an idea, though he leaves without saying a word.  Owens thinks he helped.

Rhea Ripley and Carmella are here too. Before the match, we see a clip of Zelina telling Carmella to focus on the titles instead of the risque reality show. Zelina grabs a crossarm choke to start but Morgan is right back with a sunset flip. We’ll make that a tumbleweed for two more, followed by the tumbleweed going backwards for the same as Zelina is a bit dizzy. Carmella offers a distraction in the corner though and it’s a powerbomb to bring Morgan back down. Ripley scares Carmella over to Graves, leaving Zelina to get caught with Oblivion for the pin at 2:50.

Rollins has an idea of his own: he could have a talk show at Wrestlemania! Like the Freakin Speaking With Seth Freakin Rollins! Or the Rollins Report! He could have Steve Austin as his guest! Owens says not so fast because that’s his thing, but Rollins thinks they could have a match tonight, with the winner getting to host Austin on their talk show. Sonya Deville comes out and makes the match, leaving Owens aghast.

We recap the Mysterios vs. Miz/Logan Paul.

Kevin Owens asks Sonya Deville what she is thinking.

Hold on because here are the Miz and Logan Paul to join commentary. Dominik gets knocked to the floor to start and it’s a waistlock to keep him down back inside. That’s broken up and it’s off to Rey for a headscissors as Miz explains why Paul will be awesome at Wrestlemania. Paul: “I’ve been doing a lot of pushups. And situps!” Rey hits a tornado DDT for two and it’s a double 619 to Alexander. The frog splash gives Dominik the pin at 3:24.

Post match Paul and Miz come in for the beatdown but Miz gets sent to the floor. Paul goes after Dominik but Miz has to save him from the double 619.

We recap Edge being all mysterious when he explained his attack on AJ Styles.

Queen Sharmell is going into the Hall of Fame.

Here is serious Edge, now with a new theme song (complete with “You think you know me? You never did.”) for another serious chat. Edge talks about how no one has ever gotten what he does so he’ll put this in terms anyone can understand. He is better than everyone, including all of the people here. What he means is that he is better than everyone in this entire industry but he hasn’t shown that since he has been back.

We look at Bianca Belair using her hair as a weapon over the last few weeks.

Bianca Belair says the hair is part of herself and the real advantage is that Becky Lynch isn’t running her mouth these days. Tonight, she is going to focus and use Doudrop to give Lynch a Wrestlemania preview.

Nikki Ash is here with Doudrop. Belair starts fast with a dropkick but misses another one. Doudrop misses the backsplash though and they head outside. That lets Doudrop toss her into the barricade, only to miss the Cannonball as we take a break. Back with Belair having to slug away and hitting a jumping kick to the chest. Belair drives her into the corner, tells Doudrop to kiss it, and backflips over her out of the other corner. A spinebuster drops Doudrop and the KOD finishes Doudrop at 7:58.

Post match here is Becky Lynch to pull Belair outside and the beating is on again. Becky wraps a chair around Belair’s throat and pulls her into the post by the hair to leave her laying. Lynch says it’s the hair next week.

Here is RKBro for their Championship Celebration, complete with an oddly themed set and balloons. Riddle talks about how he feels like he is in a time vortex as he keeps playing last week’s victory in his head. Orton talks about how this is going to be his 18th Wrestlemania appearance and the first time he has gone in as a Tag Team Champion. It is also the first time that he has come in with a partner and he decorated the ring on his own.

It might not be his specialty, but Riddle is happy that Orton remembered his birthday. Sure it’s in ten months, but that is the Viper Mentality. Orton has him popcorn from the concession stand (Riddle’s favorite!), some gum (they’ll share), and something in a bag….but here are the Street Profits to interrupt.

Riddle welcomes them to the part, only to have the Profits get to the point: they beat RKBro a few weeks ago and want the title shot at Wrestlemania. Orton says they had to jump through every hoop and put in the effort to get there, so the Profits get no shot. That doesn’t work for the Profits, who aren’t just asking.

Orton doesn’t like being told what to do in this ring and threatens to listen to the voices and make them leave. Riddle tries to calm things down, saying that the Profits did beat them and they have to defend against someone. Riddle talks Orton into the match and it is officially accepted, but the Profits insult the celebration. That’s not cool with Riddle, who wants to face Ford right now. Sure.

Ford takes him down to start but the standing moonsault is countered into a triangle. That’s escaped in a hurry and Riddle is sent into the corner for a back rake. Riddle shrugs it off and rolls some gutwrench suplexes for two. It works so well that Riddle tries it again but this time Ford sends him outside. The big dive to the floor is pulled out of the air but Ford backflips out of a German suplex. Ford hits his own dive to take Riddle down as we go to a break.

Back with Ford getting two off of a splash but missing the frog splash. Riddle hits his running forearms in the corner, setting up an Orton powerslam (which draws Orton up to the apron to applaud). There’s the hanging DDT and the RKO connects but here is the Alpha Academy to jump Dawkins and Orton. Otis pulls Riddle to the floor for the DQ at 8:59.

Result: Riddle b. Montez Ford via DQ when Otis interfered (8:59)

Post match Alpha Academy beats Ford down, because WE MUST HAVE A TRIPLE THREAT MATCH!!!

We get the Scott hall tribute video. Dang that’s a hard one to see.

Long recap on Kevin Owens vs. Seth Rollins, as they are still friends but now Rollins wants Owens’ spot at Wrestlemania.

We look back at Bianca Belair being attacked by Becky Lynch, resulting in throat trauma.

The winner gets to interview Steve Austin at Wrestlemania and the bell rings at 10:43, fifteen minutes after Owens’ music started (two commercials, the recap, and the Belair update). Owens shouts about it being his spot at Wrestlemania and hammers away in the corner. Rollins reverses and does the same before taking Owens down for a kick to the back. Some shots to the leg get Owens out of trouble and he kicks Rollins’ knee out. A leglock goes on but Rollins slams his head into the mat to escape.

They fight to the apron with Rollins hitting a backdrop. Owens catches the dive though and hits a (Razor Ramon) fall away slam into the barricade. The backsplash crushes Rollins and we take a break. Back with Owens hitting the Cannonball in the corner for two and kicking Rollins in the knee. Rollins is right back with a Downward Spiral into the corner and the Sling Blade.

The top rope knee sends Owens outside for the suicide dive, followed by another one over the announcers’ table. Back in and a superkick into the frog splash gets two but Owens is back with the spinning superplex for two of his own. The Stunner is blocked and Owens is almost ran into the referee in the corner. That sends the referee outside, meaning Rollins’ rollup only gets two. Rollins yells at the referee so he misses the Stomp and bangs up his knee. The Stunner lets Owens keep what he already had at Wrestlemania at 14:46. 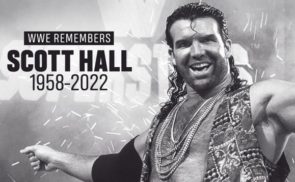