It’s the final show of the year and that means it’s also the go home show for Day One. There are a few big stories this week, including the renewal of Miz and Maryse’s wedding vows, but we also get to find out how the Coronavirus outbreak has impacted the roster. Lesure
t’s get to it.

Here is RKBro for a chat. Riddle, in a party hat, talks about how the team had a good year but Randy Orton won’t read a Christmas card. Orton wants to beat Otis right now to make sure he has a good new year, but Riddle wants to look forward to the future. Next year could see them patent Brogurt! Last week Riddle was thinking about the future and thought he turned into a viper but Orton doesn’t want to hear about it.

Instead he asks to see a clip from last week, which has Riddle wondering what Orton means by “production truck”. Anyway, Otis might be non-RKOable, so here is the Alpha Academy for a chat. Chad Gable again brags about his recent Masters degree and doesn’t like that being booed. Riddle tells him to be quiet because Riddle considers himself a man of higher education. That has Orton pleased, as does Riddle wanting to face Gable right now.

Gable wrestles him down to start and gets an early near fall as Riddle can’t do much with him. Riddle fights up so Gable takes out the leg by wrapping it around the ropes. Some shots to the leg keep Riddle in trouble, setting up a tiger suplex for two. The ankle lock goes on but Riddle is out in a hurry with a jumping knee to the face. The Floating Bro finishes Gable at 4:09.

We’re joined in progress with Orton not being able to hit the RKO but Otis being able to hit a big splash. A knee drop has Orton in more trouble and another RKO attempt is shoved away. Orton heads outside, where Otis misses a charge into the steps. Back in and the hanging DDT plants Otis but a third RKO attempt is countered into a World’s Strongest Slam. The Vader Bomb misses though and now the RKO can connect to finish Otis at 3:21.

Post match Riddle wants to give Orton his present….and we get the big hug. Riddle is thrilled and celebrates as Orton leaves.

We look back at Bobby Lashley wrecking everyone in last week’s tag team main event, only to be laid out by Seth Rollins and Kevin Owens.

Kevin Owens is ready to talk about what happened but we get a message from Big E., who promises to retain the title after getting back to himself. He knows he is worth more and didn’t come this far to just come this far and you have to feel that. Owens says Big E. is wrong and says this is his own story. Everything is coming together and he’ll win the title at Day One. Oh and interviewer Kevin Patrick is now named Bert.

Corey: “R-Truth couldn’t have picked a better partner.” Truth headlocks Reggie to start as Graves rants about Reggie’s red and yellow gear. Tamina comes in and knocks Reggie into the corner, meaning Brooke can come in to strike away. Everything breaks down and Reggie grabs a victory roll on Truth (who gets spiked down hard) for the pin at 2:46.

Nikki Ash is feeling confident and issues the challenge for herself and Rhea Ripley against Queen Zelina and Carmella for the Women’s Tag Team Titles.

Ford takes Dominik down with a headscissors but they both nip up in a hurry. Dawkins comes in to run Rey over but everything breaks down. The Profits are sent outside, with the Mysterios hitting a sliding splash/sunset bomb into the barricade as we take a break. Back with Ford missing a splash in the corner so Dominik can hit a flip cutter to put them both down.

The hot tag brings Rey back into beat up Dawkins, including the springboard crossbody. Dawkins elbows him down to break up the 619 so Rey is right back with a tornado DDT for two. The Silencer drops Rey so Ford can hit the Cash Out for two, with Dominik having to make a save. Dominik dives out onto Dawkins and the 619 hits Ford, setting up a frog splash for two. The double 619 only half hits but Rey is sent hard to the floor. That leaves Dominik to get caught in a Doomsday Blockbuster for the pin at 12:58.

Video on AJ Styles and Omos.

Miz is NOT happy with the flowers ready for his wedding vow renewal with Maryse. He is however happy with the guest officiant: Eric Bischoff, who promises to make this must see TV.

Here is AJ Styles for a chat and he wants to know where Omos is. He has been around for twenty years and has seen them come and go…but NXT’s Grayson Waller is in the front row, with a sign mocking Styles. AJ has him get in the ring, where Waller says Mondays feel right. Maybe he can take AJ’s spot when Omos is done with him! AJ says let’s get this over with because Waller isn’t a star, but here are Commander Azeez and Apollo Crews. Since Omos isn’t here tonight, AJ can fight Crews’ giant instead.

Carmella accepts the Women’s Tag Team Title shot from Rhea Ripley and Nikki Ash, because that means Ash will have to be involved at some point. Nikki is ALMOST second best or almost a good tag partner, but Carmella and Zelina aren’t ALMOST going to retain their titles.

Apparently Crews changed his mind during the break and took Azeez’s place. Crews snaps him throat first across the top and hits a big backdrop to take over. Styles is sent hard into the corner and Crews pulls him outside for a knee to the ribs. There’s a face first drop onto the apron and we take a break with Styles in big trouble.

Back with Styles fighting out of a chinlock and hitting the Pele kick. Styles charges into a boot in the corner but comes back with a fireman’s carry backbreaker anyway. The Styles Clash is countered into a sitout powerbomb to give Crews two but Styles is back with the moonsault reverse DDT. They head to the apron, where Crews hits a Death Valley Driver to knock Styles silly for two. A superplex is broken up and they go into a pinfall reversal sequence until the Styles Clash finishes Crews at 10:42.

Post match, Commander Azeez goes after Styles as well but gets taken down.

Seth Rollins, at his home and still in a purple suit, says Kevin Owens can take credit for last week, but Rollins will take the title.

Here is Kevin Owens for a chat. Owens talks about what a great time he has been having lately, from an amazing Christmas with his family to beating Edge in Madison Square Garden this week (don’t bother looking that up and take his word for it). He is the only member of the four way match here tonight and that gives him a huge advantage. Owens loves watching Big E. and Bobby Lashley fight while he and Seth Rollins are like this. He’ll win the title on Saturday, but here is MVP to interrupt.

MVP is looking forward to Bobby Lashley shutting Owens up at Day One, because Lashley has a message for Owens. MVP reads from his phone, but Owens doesn’t think Lashley actually wrote it. Owens tells him to text Lashley that he’s going to win but MVP insults Owens’ mother. Owens: “My mother says I’m special.” Cue the former Hurt Business but MVP doesn’t know why they’re here. They know Lashley can’t win on his own so they’re here to help take Owens out. Owens says let’s get this over with so they can text Lashley about reforming the Hurt Business.

MVP is on commentary. Owens runs him over to start and hits the fisherman’s buster onto the knee for an early two. They head outside with Owens being sent into the barricade, setting up a springboard Downward Spiral for two back inside. Owens shrugs that off and hits the Pop Up powerbomb, setting up the Stunner to finish Alexander at 3:19.

Post match Shelton Benjamin wants to go after Owens but gets Stunned as well.

We recap Damian Priest snapping last week, setting up his US Title defense against Dolph Ziggler.

Damian Priest likes having his violence take over, even if he is facing Dolph Ziggler.

Priest is defending after the Big Match Intros, we’re ready to go. Ziggler goes straight for him and gets kicked in the face for his efforts. A few shots stagger Priest but he knocks Ziggler outside. Priest sends him flying into the timekeeper’s area and we take a break. Back with Ziggler hammering away in the corner but Priest fights back and hits a heck of a flapjack. The Broken Arrow gets two but Ziggler is back with a quick DDT. That’s not enough to finish Priest either so Ziggler slaps him in the face. You don’t do that to Priest, who snaps and beats the tar out of Ziggler in the corner for the DQ at 10:25.

Result: Dolph Ziggler b. Damian Priest via DQ when Priest attacked in the corner (10:25)

We recap Edge vs. Miz.

It’s time for Miz and Maryse to renew their wedding vows, with Eric Bischoff (to a VERY strong reaction) officiating. Miz comes to the ring and trips on his way into the ring. Maryse comes out in the wedding dress and they are both rather happy. Well as happy as Miz can be in a place like Detroit. Maryse praises Miz for being a great father and husband before asking if he will continue being her husband. Miz: “Should I?”

Of course he will, and then recites his vows in French. Or at least he tries, because he needs help from Maryse and slips into Spanish. Maryse tells him to just do it in English so he praises her again, including their fireworks inducing lovemaking. She’ll continue to be his wife too, so Bischoff goes to wrap it up. We know how this is going to end though (his words) so here is Edge to interrupt.

Edge talks about how he was getting sick listening to those vows and can’t wait to crush Miz at Day One. Miz calls it true love with Maryse and kisses her, so Edge tells them to get a room. Edge promises to embarrass Miz on Saturday but then starts looking around. Miz isn’t sure what is going on but Edge is just messing with him. Hold on though: they did want this to be a white wedding right? We get the Brood music and there’s the blood (now gray/black) bath to end the show. 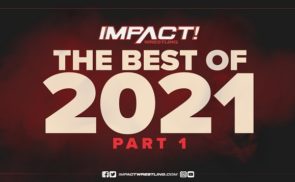