KB’s Review: What I’ve Been Waiting For

Every now and then, WWE will release a list of the most watched shows on the WWE Network. Most of the time these lists are what you would expect: the most recent pay per view, NXT, Total Divas or whatever else WWE has been hyping up at the time. However, there’s a bunch of great stuff on there that is almost never mentioned by WWE, even though it’s some of the best wrestling television you’ll ever see. Today we’re going to look at some of the recent content dumps the Network has uploaded and some of the shows worth going out of your way to watch.

In recent weeks, the WWE Network has gone on a territory binge, uploading several episodes of a bunch of great territory TV shows. Let’s take a look at some of those promotions and how different they are from each other. There are some hidden gems in there and some awesome TV that people haven’t seen in a long time.

We’ll start with Mid-South Wrestling. This is Bill Watts’ promotion based out of Tulsa, Oklahoma and the breeding ground for a lot of big stars. Mid-South was the place where names like Jim Duggan, the Junkyard Dog, Magnum T.A. and Ted DiBiase became big stars here, in front of some of the most energetic fans you’ll ever see.

Mid-South was a promotion built around the basics: you had good guys and bad guys with the bad guys cheating and doing evil things to the good guys. Then the good guys would come back and win in the end, usually sending the bad guys running off. That’s wrestling in a nutshell, but when you can do it with big name stars and hot feuds, the whole experience is so much fun.

While there isn’t much Mid-South up on the WWE Network at the moment, it’s a show that you can get into the more you watch it. It’s built on the strength of getting behind these characters and seeing how they interact with each other, plus having new names coming into the territory from time to time. That means you have people like Dusty Rhodes and Andre the Giant coming in to deal with the top heels like DiBiase or Jim Cornette and the Midnight Express.

Mid-South is a really fun promotion and something that can get really addictive in a hurry so check out what they have up at the moment and see why it was close to going national and challenging Vince and Crockett as a third national promotion. You’ll see a lot of the big WCW and WWF names getting their start here before they were swallowed up by the major companies, making this much more like one of the original independents of today.

Next up is a promotion that I’m sure you’ve heard of a few dozen times or so: the American Wrestling Association (AWA). Much like Memphis in its day, making an appearance in the AWA is almost a rite of passage for most wrestlers. The AWA was definitely one of the biggest wrestling promotions in the world at the time and for the most part it was based on just the wrestling.

It’s a promotion built around even simpler stories than Mid-South but the star power more than helped bring it up. If you’re a fan of the Rock and Wrestling Connection, you’ll see a lot of familiar faces in the AWA, such as Hulk Hogan, Tito Santana, Sgt. Slaughter, Wendi Richter and Jesse Ventura. The same is true for the Golden Age with names like Curt Hennig, Rick Martel and some of the New Generation with names like Scott Hall and Jerry Lawler (as the World Champion).

The company would go down hill in its final years, but the earlier days when the company was still rolling had some awesome moments and some outstanding wrestling. You have Shawn Michaels as a rookie trying to figure out how to be a tag wrestler and Stan Hansen being all insane and Vader as the Baby Bull among other future stars in their formative years. Forget the later years and check out the best times (at least the best times available) to see why you hear about this promotion so often.

Let’s get out of the 80s for a bit now as we go forward to one of the last true territories: Smoky Mountain Wrestling. This was the definition of a show focusing on a select area and while it was around, it showed that this could work on a limited scale. Much like the aforementioned territories, this place was a breeding ground for a lot of big stars, including names like Kane, Chris Jericho, Lance Storm and Al Snow, many of whom got their start here.

Smoky Mountain was run by Jim Cornette who focused on simple angles with good guys vs. bad guys and a lot of building up to major shows that you had to pay to see. It was very much an old school promotion and offered some very entertaining moments and stories. The tag division was a major highlight with teams like the Dynamic Duo (Al Snow/Kane), the Thrillseekers (Chris Jericho/Lance Storm), the Heavenly Bodies and the Midnight Express trading the titles all over the place.

The company was one that wasn’t going to last long term and wasn’t really an option to go national due to a lot of the booking tropes they would use, but it was a promotion that a lot of people wanted to work for because of how much fun it was. They even had a working agreement with the WWF, meaning you would see names like Undertaker appearing every now and then, including a match against New Jack. If that doesn’t make you want to see this show, nothing will.

If the old school style isn’t working for you, let’s take a look at a promotion that actually changed the way we watch wrestling: World Class Championship Wrestling (WCCW). This really was a game changer with the ideas of putting microphones in the ring and using rock music for theme songs. Couple that with some of the hottest crowd you’ll ever see and there was no way this wasn’t going to work.

WCCW was similar to Mid-South as everyone wanted to come there at one point or another and most people did. You would see Andre, Rhodes, Ric Flair, Bruiser Brody, Shawn Michaels (who got his start there) and eventually Steve Austin, giving it one of the most packed rosters in wrestling history.

Of all those names though, this place was all about the Von Erichs vs. the Freebirds. It was one of the best feuds of all time and went on for several years with the final match taking place twelve years after they first got started. If you’ve never seen those teams fight, go out of your way to see some of their matches and just watch how nuts the crowd is over the whole thing. You can see where it started on the episode dated December 28, 1982 which features Flair defending the NWA World Title against Kerry Von Erich inside a cage.

That leaves us with one promotion left and it’s the best of them all: NWA World Championship Wrestling. This is the mother of all territory shows and the gold standard of the old school wrestling television show. If you like the current NXT show, you’re going to love this company. It’s rare to see a match go on longer than a minute or two because the big name squashes the jobber in dominating fashion every single week. That really makes sense the more you think about it.

However, the strength of this show is in its promos. You’ll have everyone coming out and talking for a bit about their upcoming matches and current feuds before going to the ring for a really quick match. It kept the show moving very quickly and made sure that most of the people got in an appearance every week. It’s definitely not the show if you’re a fan of long matches and in ring action but if you want to get fired up for a match at a big show, this is the best you’re going to get.

When the WWE Network was announced, this is what I was looking forward to the most. We’ve seen a lot of the major shows that these TV episodes built up to, but it’s amazing to be able to go back and look at how we got to those big matches. That’s what we have here as we see the shows that got people watching and kept them entertained for so many years. It’s so cool to be able to see how different companies did things in different ways and comparing what worked and what didn’t work. This is the Christmas present I was hoping for and I certainly hope you go out of your way to see some of this great wrestling history. 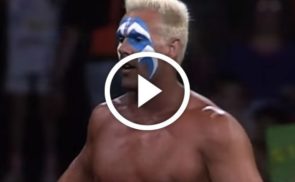