It’s time for a holiday show and in this case, that might not be the best thing in the world. The biggest story tonight is going to be the turkey suit match, which is one of those traditions that has been around here for years despite not many people seeming to be a fan of the thing. Let’s get to it.

We open in the back with the tumbler containing the names available for the ten person tag. The captains, Fallah Bahh and Eli Drake, come in to talk about the match. Believe it or not, Drake is a little bit better in this area. The interviewer throws us to a video explaining the concept…which is last year’s match in its entirety.

Garza gets punched down though and it’s time for the heel beatdown. Adonis comes in for two off a legdrop and it’s time for a bearhug (on a guy with a bad shoulder). That goes nowhere and the hot tag brings in Eddie to clean house. Everything breaks down in a hurry and KM gets crushed between Justice and Bahh.

Post break, Adonis refuses to wear the suit. Security actually stops him as the referee holds up the suit like an executioner’s ax. After a lot of persuading and a GOBBLE GOBBLE chant, Adonis finally puts it on and walks around a bit. Adonis isn’t cool with the chants though and the required food fight, with Adonis hitting Drake in the face with a pie, ends the show. This was actually entertaining as they just went with the simple comedy and it worked perfectly well.

Back in the present, Bahh selects his first name, and it’s KM. As you might have guessed, KM comes in to talk about Thanksgiving dinner.

Drake wants the interviewer to say Spin the Wheel, Make the Deal as the tumbler is spun. He gets….Katarina, who is there too. Her great grandfather was a pilgrim so Drake should be rather happy.

We see about five minutes of the 2007 edition, which ended in AJ Styles wearing the suit.

Video on Brian Cage cashing in Option C to challenge for the World Title at Homecoming.

Bahh, after being convinced that he can’t get Katarina flowers, draws Japanese comedy wrestler Kikutaro, who wears a pink mask and shouts a lot.

Here’s Scarlett Bordeaux to dance with a burlesque troupe.

More Scarlett fan submissions, including one from Shark Boy.

Drake picks a name, doesn’t like it and picks another one, drawing Jake Crist. OVE comes in and Drake tells them to get this right. Sami tells Jake to not screw this up, or he has to eat the entire Thanksgiving dinner.

Some wrestlers and personalities give their favorite Thanksgiving memories.

Bahh, who is thankful for KM, picks Dezmond Xavier. Dezmond comes in and talks trash to them…before being told he’s actually on their team. He’s a rather confused young man.

Drake says Bahh is thankful to OVE for helping with his English (Now he can say EVERY BAHH.) and draws Rohit Raju. Geez we can’t even escape these guys on a holiday show. The Desi Hit Squad comes in to say if you get one, you get them both.

Bahh’s final pick is Alisha Edwards. She comes in and doesn’t like Bahh’s joke.

Drake’s final pick is Glenn Gilbertti, the Disco Inferno. He wants to impress Scarlett with CGI: class, good looks and intelligence. Then the two of them will get married so Drake can be the best man.

Ultimate X is back at Homecoming.

Gilbertti takes credit for inventing Ultimate X after being told that he couldn’t throw X-Division wrestlers off the building.

Video on the history of Option C.

Team Bahh gets a pep talk, featuring the word BAHH over and over again. KM translates, which doesn’t make it much better.

Before the match, we get a pledge to wear the turkey suit if you get pinned. Katarina throws Alisha down to start and getting two off a Samoan drop. Alisha fights up and brings in Jake to face Kikutaro, who armdrags him down and hands it off to Dezmond. Drake comes in for his pop up reverse powerslam and hands it off to Raju as the fast tags continue. Rohit gets beaten up as well so Gama Singh gets in to give him a pep talk.

This time it’s Bahh getting beaten down in the corner, including a few right hands from Gilbertti. A double crossbody crushes Gilbertti and Drake so it’s off to KM and Raju. Everything breaks down and we get the Human Centipede of figure four neck locks, capped off by Bahh turning them all over in a Boston crab. Cue Scarlett in a pilgrim hat to stop the proceedings and we take a break.

Back with Scarlett sitting on a chair on the stage and Kikutaro charging into Drake’s raised boot in the corner. Drake throws on Scarlett’s pilgrim hat and it’s time for the rotating stomps to Kikutaro. An enziguri to Raju allows the hot tag to Dezmond. The villains are sent to the floor for a big flip dive from Xavier and Bahh knocks Drake onto the pile.

Bahh dives off the apron as well and the women are left in the ring to…do very little. Instead KM comes in for a DDT on Gilbertti, followed by the entire face team rolling over him. Even the referee gets involved. Bahh misses a splash though and Gilbertti misses a People’s Elbow (with some YMCA dancing in there). The Banzai Drop finishes Gilbertti 18:44.

Post match Gilbertti’s partners leave and he continues the tradition of refusing to wear the suit. Scarlett comes to ringside and says she finds a man who doesn’t take himself seriously rather sexy. The suit goes on and she says he looks like an idiot as Gilbertti is greeted with a GOBBLE GOBBLE chant to end the show. 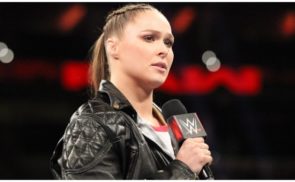 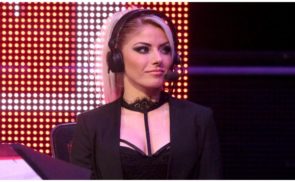