We’re about six weeks away from Revolution and that means Bryan Danielson is still on the road to getting his Iron Man match with MJF for the World Title. Other than that, Orange Cassidy is defending the All-Atlantic Title against Jay Lethal and Ricky Starks continues his issues with the Jericho Appreciation Society. Let’s get to it.

In Memory Of Jay Briscoe.

Cassidy is defending and there are no seconds, though here are Jeff Jarrett, Satnam Singh and Sonjay Dutt through the crowd to take fans’ seats. They start fast with Cassidy grabbing a small package and backslide for two each before Lethal knocks him outside. Cue Danhausen, who is now an usher, demanding to see Jarrett and company’s tickets. Because reasons, they hand them over, and Danhausen waves over the Best Friends (with concessions) to sit behind them.

In the melee, Cassidy hits a suicide dive but Lethal knocks him back down without much effort. Now Danhausen is at ringside as Lethal drives Cassidy into the apron. A hard posting has Cassidy in more trouble and Lethal gets to strut. Back in and Hail To The King is loaded up but Cassidy rolls away, even as Lethal tries multiple buckles.

The Stundog Millionaire and tornado DDT hit Lethal for two but he’s right back with the Lethal Combination. The Lethal Injection connects, only for Cassidy to roll outside. Hold on though as the referee goes to yell at Jarrett and company, allowing Danhausen to steal the guitar. Lethal gives chase and runs into the Orange Punch to retain the title at 9:09.

Post match everyone else gets in and Cassidy gives Dutt the lazy kicks. Dutt has to be held back and we don’t get much physicality.

Video on Kushida vs. Darby Allin for the TNT Title later tonight.

Brandon Cutler is here too. Nick cranks on Dante’s wrist to start and with the traditional wrestling out of the way, they start trading the flips until it’s a standoff. Dante hits Nick in the face so it’s off to Matt, who gets tripped down by Darius via the blind tag. Everything breaks down and Dante gets caught on the middle rope. Darius gets sent outside and we take a break.

Back with Nick breaking up a hot tag attempt by punning Darius to the floor. A bulldog/dropkick combination hits Dante and a 450/standing moonsault combination gives Nick two. Dante manages to hurricanrana his way out of trouble and the hot tag brings in Darius to clean house. A high crossbody gets two on Matt and everything breaks down again. Dante hits a springboard Downward Spiral on Nick and springboards outside to dive onto Matt.

The powerbomb/Nose Dive combination gets two on Matt with Nick making a fast save. Nick gets to do his rapid fire comeback, with a slingshot Canadian Destroyer getting two on Dante. Matt, after adjusting his JAY armband, loads up a Doomsday Device for two on Darius with Dante making his own diving save. The BTE Trigger is loaded up but the Darius misses so the knees collide, allowing Darius to grab a rollup pin at 12:14.

Hangman Page feels great after last week’s fight with Jon Moxley. Page said he would knock Moxley out if he had to and then he did just that. As for his future, he won’t go into it, but Page does ask Renee Paquette how Moxley is doing and seems sincere. He asks her to tell him….never mind.

Chris Jericho is on commentary and the rest of the Jericho Appreciation Society is at ringside. Hager, with hat, starts fast but Starks takes the hat away and they head outside. Hager posts him and Starks tries to dive through the ropes to avoid the contact, only to crash into them to make it even worse.

We take a break and come back with Starks dropkicking him through the ropes to the floor. A springboard crossbody hits Hager and a running clothesline takes him down again. Starks plants him with a DDT but takes a long time posing, allowing the Society to get up on the apron. That fails as well, allowing Starks to hit the spear for the pin at 6:22.

The Jericho Appreciation Society wants to end Ricky Starks, so next week they’re facing Starks and Action Andretti. Hold on though as Daniel Garcia wants to take Sammy Guevara’s place. Guevara says cool, but only if Garcia can beat Andretti on Rampage. Guevara, who seemingly had no knowledge this was happening in advance, has new leather pants ready for Garcia.

They shake hands to start and we’re ready to go. They go to a quick standoff until Danielson headlocks him down. Back up and Bandido takes him down for a change, setting up the surfboard. That’s broken up and Danielson does the double leg stomp. They trade finger guns until Bandido ties up the legs and arms at the same time. Danielson sits up to escape but has to get out of a Texas Cloverleaf attempt as well.

Back up and Danielson knees away but gets hiptossed down, setting up…something where he ties up Danielson’s arms and legs and lifts him up. That can’t last long so Danielson rolls outside, allowing Bandido to hit the running flip dive. We take a break and come back with Danielson striking away at the ribs but getting small packaged for two. Danielson uppercuts him into the corner for the kicks to the chest.

Bandido isn’t having that and hits a springboard twisting crossbody. The delayed vertical suplex takes Danielson down again but he pulls Bandido into the LeBell Lock. Bandido gets a foot on the rope so Danielson fires off the YES Kicks. The big one is blocked and Bandido hits the X Knee. Danielson flips out of the 21 Plex though and la majistral gets two.

Back up and Bandido is sent outside for a dropkick through the ropes. There’s the running knee off the apron and they head back inside, where Bandido takes him up top. The super fall away slam sets up the 21 Plex for two and they strike it out. Danielson can’t pull him back into the LeBell Lock, allowing Bandido to pull him back up. That’s broken up and the running knee finishes Bandido at 17:53.

Post match MJF pops up on screen to say he doesn’t like how Danielson is treating him. So far Danielson has only dealt with Masked Max, but the further Danielson goes down this road, the more the mask comes off. Even the Dragon is no match for the Monster behind the mask.

Saraya and Toni Storm aren’t happy with Hikaru Shida screwing up in their match last week.

Next week it’s Bryan Danielson vs. Brian Cage, so MJF offers Cage a lot of money to Cage to unleash the hate. He even intentionally messes with Cage to make him angrier, which has MJF rather pleased.

Saraya is here with Storm. Nightingale shoulders her down to start and hits a spinning belly to back suplex. Back up and Storm slaps her in the face as Hikaru Shida comes out. We take a break and come back with Nightingale hitting a spinebuster, followed by a middle rope dropkick. The Cannonball misses though and Storm is back with the running hip attack. A tornado DDT plants Nightingale for two but she Pounces Storm into the corner. Now the Cannonball can connect for two….but then Saraya gets on the apron for a distraction so Storm can roll her up for the pin at 7:12.

Post match Saraya and Storm beat on Nightingale until Ruby Soho runs in for the save. Shida stayed neutral in the whole thing.

Konosuke Takeshita is honored to have fought Bryan Danielson, and now he wants MJF. There’s the next match that Takeshita gets to lose.

Kushida, with some students from the Los Angeles New Japan Dojo is here, with Sting in Allin’s corner. Kushida misses some kicks to start and gets pulled into a quick chinlock. With that broken up, Allin sweeps the leg for two and rolls over into an exchange of armbar attempts. The grappling continues until Kushida slips out of an armdrag, setting up the basement dropkick to send Allin outside.

Back in and Kushida kicks him in the arm before cranking on said arm. That’s broken up and Allin hits a fast Code Red, setting up the big flip dive to the floor onto the Dojo students. Kushida uses the distraction to take Allin down by the arm though and we take a break. Back with Kushida kicking at the arm, which only fires Allin up again. A Scorpion Death Drop plants Kushida for a double knockdown but he’s able to send Allin outside.

Kushida goes after the arm, only to have Allin come back with a flipping Stunner onto the apron. Allin knocks Kushida into an open chair and goes up for the Coffin Drop, only to get pulled into the cross armbreaker. Back in and Kushida cranks on the arm on top, setting up an arm crank top rope superplex. The Hoverboard Lock goes on and the students offer Sting a towel to throw in. Sting wipes his face with it and throws it into the crowd. Allin slips out and grabs the Last Supper to retain at 13:40.

Respect is shown after the match and Kushida wants to do it again. Excalibur gives Jay Briscoe one more shout out to end the show. 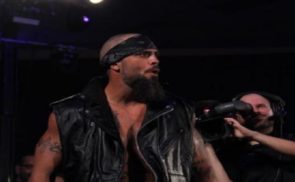