It’s the night before Emergence and that means it is time for the big final push towards the show. That could make for a good episode, as we might be seeing some Emergence build, plus some time for the people who don’t usually get the chance to shine. Oh and a contract signing, just because. Let’s get to it.

Anderson’s Never Openweight Title isn’t on the line and no one is at ringside. King snaps off some armdrags into an armbar to start, which lasts all of a few seconds. Back up and they both miss kicks to the head, giving us another standoff. A back elbow to the face drops King but he snaps the leg across the middle rope to take over.

The seated abdominal stretch has Anderson in trouble but he fights up and twists King’s knee for a change. A running backsplash hits King and the Rocket Kick gets two. King kicks the leg out again and grabs a leglock, sending Anderson straight to the ropes. Back up and Anderson grabs a Gun Stun out of nowhere for the pin at 7:54.

Post match King chairs Anderson in the leg but Heath runs in with a Wake Up Call before Pillmanization can occur.

Joe Doering and Chris Sabin are here too. Kushida snaps off an armdrag to start but a second one misses, allowing Deaner to stomp away. Back up and Kushida handspring kicks Deaner out to the floor but it’s too early for the Hoverboard Lock. Doering offers a distraction though and Deaner gets in a cheap shot.

We take a break and come back with Deaner raking the eyes to cut off some chops. Kushida goes right back after the arm but a knee and clothesline take him down. Doering’s distraction is cut off by Sabin though, allowing Kushida to grab a hammerlock northern lights suplex for the pin at 9:49.

Flashback Moment of the Week: Alex Shelley b. Chris Sabin at Genesis 2009 to win the X-Division Title.

Bhupinder Gujjar AGAIN challenges Brian Myers for the Digital Media Title and finally gets the shot at Emergence.

Eric Young yells at Violent By Design and promises to get rid of Chris Sabin and Kushida at Emergence.

Nieves slaps her in the face to start so Kelly hits a kick to the face to take over. A running basement dropkick in the corner sets up a choke (the Killer Clutch) to make Nieves tap at 1:23.

Rayne drives her into the corner to start until Yim grabs a hammerlock. That’s broken up with a faceplant but Yim is fine enough to grab a rollup for two. A chase around the ring goes badly for Yim as she gets posted, setting up some choking on the ropes. Rayne charges into a boot though and the Tarantula has her in trouble.

Another faceplant gives Rayne back to back near falls but a hurricanrana is countered into Yim’s sitout powerbomb. Some dropkicks send Rayne into the corner for the Cannonball but Rayne counters the package piledriver. A crucifix bomb gives Rayne two so Yim is back up with an enziguri. Eat Defeat finishes Rayne at 9:25.

VXT is ready to win the Knockouts Tag Team Titles.

Jordynne Grace wants to make sure Mia Yim is ready for tomorrow but they get catty over their recent tag matches.

Bailey is defending. They go with the rapid fire technical off to start and that’s a standoff. Neither can get anywhere off an armdrag or a dropkick so Romero dropkicks the knee out and rolls him up for tow. Back up and they trade kicks to the legs until Romero sends him outside. That doesn’t last long and it’s Bailey blocking a middle rope hurricanrana by landing on his feet for another standoff.

We take a break and come back with Bailey kicking the post by mistake, allowing Romero to hit the Forever Clotheslines. Bailey’s leg is fine enough to kick him down again, setting up the running corkscrew shooting star press for two. Romero’s springboard tornado DDT gets the same and Bailey gets blasted with a clothesline. Back up and Bailey hits a superkick for a double knockdown and we take another break.

We come back again with Bailey hitting an Asai moonsault before kicking Romero down back inside. The moonsault knees to the chest give Bailey two but Romero Falcon Arrows him into a cross armbreaker. The standing shooting star press drops bailey for two more but Sliced Bread is countered into a rollup. More Forever Clotheslines are countered with a shot to the face and the Ultimate Weapon retains the title at 19:04.

Here is Scott D’Amore to run the contract signing between Alex Shelley and Josh Alexander. D’Amore talks about how he has coached both of them and introduced Shelley, who is finally getting his World Title shot. Alexander gets quite the hype as well and D’Amore is really excited about the dream match.

Before signing, Alexander talks about going to his first wrestling show in 2005 and Shelley was on the card. Alexander knew that Shelley was special because he stood out in a world where it was hard to be unique. The next day, Alexander stepped into a ring for the first time and over the next seventeen years, he has seen all kinds of Shelley copycats. It will be an honor to get in the ring with him and Alexander signs.

Shelley talks about the similarities in his career and asks why Alexander isn’t just another of those copycats. Alexander: “I’ve always been more of a Chris Sabin guy. You know, someone who has actually won the big one.” Alexander thinks Shelley might be self sabotaging himself because he’s too talented to never be World Champion.

Shelley talks about the injuries that the two of them have had over the years and says that the problem for Alexander is who he is across the ring from tomorrow night. When Shelley gets in the ring, he won’t be looking at the champ, but rather at an Alex Shelley mark. Shelley promises to win the title but has a consolation prize. He signs the contract and hands it to Alexander. Shelley: “There’s your Alex Shelley autograph.” Shelley walks off to end the show. 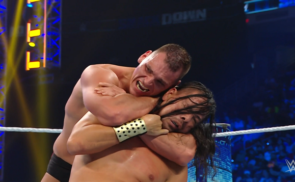