We’re live again this week and we’re in….Arkansas. That’s kind of a drop from Chicago but I’ll take what I can get. The main story going on here is that Hardy is #1 contender again with the title match date announced for two weeks in Corpus Christi, Texas. Therefore tonight is going to be about building up to that show. Gut Check and Open Fight Night are back too. Let’s get to it.

After another recap of Ray’s turn at Lockdown, here’s Hardy to open things up. Since it’s Open Fight Night, everyone that is called out has to fight. Jeff can’t call anyone out yet because here are Aces and 8’s to interrupt them. Ray talks about how they’re not in Corpus Christi so the title wouldn’t be on the line if Jeff called him out tonight.

Anderson interrupts him though and says that Jeff is trying to get yet another chance. Jeff is a disappointment and he’s going to be one in Corpus Christi as well. Hardy lunches at Anderson and the group beatdown is on. The TNA troops come out for the save and Hardy calls out Anderson for later tonight.

Chavo and Hernandez want to get their hands on Bad Influence.

Chavo has apparently talked to Hogan and this is a #1 contenders match. Chavo and Kaz get things going but it’s quickly off to Hernandez for a splash for two. Daniels tries to rush Hernandez but gets caught in a release overhead belly to belly by the big man. Back to Chavo for a rolling senton onto Daniels who is on Hernandez’s knees. Kaz knocks Chavo to the floor and into the announce table but it leaves them alone with Hernandez. Chavo comes back in as house is cleaned, putting Bad Influence down. Hernandez and Chavo head to the ramp and hit stereo dives over the top and into the ring to take out both guys.

Back with Kaz doing the Eddie Guerrero dance with Chavo in trouble. A slingshot legdrop gets two for Kaz and we get some good old fashioned double teaming, followed by some good old fashioned heel miscommunication, allowing for the hot tag to SuperMex. Hernandez cleans house and puts both guys on his shoulder for a backbreaker at the same time.

Daniels wants a time out but gets suplexed from the apron anyway. Kaz tries to sweep Hernandez’s leg for a cheap pin but Hernandez is in the ropes. Daniels trips him up in the corner and puts his own feet on the ropes to cheat but gets caught again. A sitout Alpha Bomb puts Daniels down and it’s off to Chavo for the Frog Splash, but Kaz breaks it up, allowing Daniels to get a rollup for two. Kazarian is knocked off the ramp and Hernandez takes out Daniels, allowing the Frog Splash to get the pin at 12:14.

Gail comes out and says that Taryn doesn’t want to try this on her first night as a Knockout. Instead of fighting, Gail asks Tara to come help her with the beating. Tara comes down the ramp and the double beatdown is on. Velvet finally comes out for the save and cleans house. No match.

Post break Taryn keeps the fight going in the back.

Apparently Gut Check is next week instead of this week so here’s a video about how great of an opportunity it is.

The competitors next week are Magno and former NWA World Champion Adam Pearce.

Sting shouts at a security guard.

Hardy is in Hogan’s office and talks about the match in Corpus Christi. Hogan talks about Aces and 8’s stealing the title from him and how he’s made mistakes. Jeff gets to hand pick the stipulations for the match. Sting’s music plays so Hogan limps to the arena.

Sting is in the arena and calls Hogan’s out for a chat. Hogan gets in Sting’s face and says that Sting has caused all of these problems because Sting told Hogan what to do and Hogan did it. Sting finally says what has been obvious all along: this is all Hogan’s fault because HE is the boss, not Sting. Hogan goes on a rant and says he had the final decision and now he’s making another decision: Sting needs to get out of this ring. He goes to leave before turning around and telling Hogan to make him. They’re about to brawl but security breaks it up and Sting is escorted out of the arena.

Post break Matt Morgan says that was yet another Hogan mistake but Sting keeps walking.

We recap the AJ Styles saga with Aces and 8’s offering him a spot on the team.

Here’s James Storm to call out AJ Styles who is standing in the crowd. Storm says that he was here last year but he came back to fight again. If AJ wants to take his hand and put a beer in it for a talk or make a fist and fight, it’s fine with Storm. Before AJ does anything, Aces and 8’s runs in for the beatdown. AJ walks away. Eric Young runs in to try to make the save but gets beaten down almost immediately. Cue Kurt Angle for the real save. With the ring cleared we get a call for a six man tag.

Storm and Bischoff get things going here with James cleaning house. Off to Young who thankfully looks sane here. Garrett gets in a knee to the robs to take over and it’s off to Brisco. Brisco pounds away but Young comes back with a forearm to bring in Angle. Kurt stomps away in the corner and lures the other bikers in so Wes can get triple teamed in the corner. Back to Young for a slam and elbow drop for two but it’s a cheating knee from Doc to turn momentum.

Off to Garrett again as the match slows down again and we take a break. Back with Young using a jawbreaker to escape a chinlock and there’s the hot tag to Storm. Doc finally comes in and gets an elbow up in the corner to break up Storm’s momentum. An overhead butterfly suplex gets two for Doc and it’s back to Bischoff. After some basic stuff, here’s Brisco for some more slow paced stuff.

Wes chinlocks Storm before bringing Doc back in for some right hands. Storm gets a boot up in the corner though and speeds things up before hitting a cross body to put Doc down. The hot tag brings in Angle who cleans house. Angle unleashes the suplexes but D’Lo Brown’s distraction lets Brisco roll up Angle with a handful of trunks for the pin at 14:27.
Result: Aces and 8’s b. Kurt Angle/Eric Young/James Storm – Rollup to Angle (14:27)

The other bikers celebrate in the back and Anderson is all fired up for the match tonight.

We hear about the first One Night Only shows, which is a series of one off shows which won’t be involved in the main storylines.

Next week it’s Sonjay Dutt vs. Mason Andrews vs. Petey Williams for a shot at the X Title.

We recap the end of Lockdown with Ray turning on Hogan and TNA.

It’s a brawl to start with Hardy sending Anderson out to the floor and following up with a clothesline off the apron. They head to the ramp but Anderson misses a charge into the ring to give Hardy control again. Back from a break with Anderson cranking on Hardy’s arm after injuring it during the break. After Jeff armdrags out of it they slug it out with Jeff taking over with a forearm.

The basement dropkick gets two on Anderson but he comes back with the fireman’s carry senton for two. The Whisper in the Wind misses Anderson so he immediately gets a few two counts. Anderson trips the referee and Bischoff brings out the hammer, only to have Jeff duck and hit the Twisting Stunner. Hardy gets the hammer and blasts Anderson in the ribs for the DQ at 10:47.

Result: Mr. Anderson b. Jeff Hardy via DQ when Jeff hit Anderson with a hammer (10:47)

Post match Hardy beats up Bischoff and Anderson before pulling out a table, a ladder and a chair.  Hardy puts Anderson on the table and climbs the ladder but Bully makes the save.  Jeff makes it Full Metal Mayhem for the title, which is TNA’s version of TLC.

Thank you for joining us for our Impact Wrestling live coverage.  Make sure to join us tomorrow night at 8pm EST for Smackdown.

If you enjoyed my work, check out kbwrestlingreviews.com for a lot more and follow me on Twitter @kbreviews 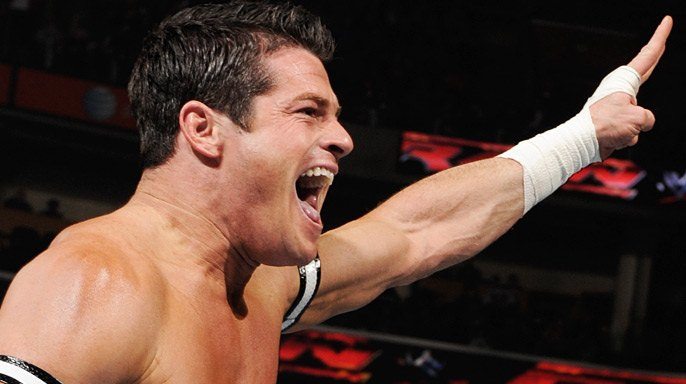