That sounds connected. There have been all kinds of people leaving WWE over the last few years, with several of the names leaving the company without making the decision themselves. While many of them have been on the active roster, there have been a lot of names who have been let go that do not appear on camera. It turns out that some were related to a prominent name who left as well.

Earlier this week, Stephanie McMahon announced that she is taking a hiatus from her work in WWE. According to Fightful Select, much of McMahon’s team was let go in the recent round of releases. There is no word if this played a role in McMahon leaving or if the people were let go as a result of McMahon leaving. It is not clear when McMahon will be returning to work.

Opinion: I’m not sure what happened that caused McMahon to leave, but there is a logic to the idea that if she is gone, there is no need to have her team around. Assuming their major responsibilities are working for McMahon, it makes some sense for WWE to let them go. Maybe they will be brought back when McMahon returns, or at least hopefully they will, as it isn’t good to see someone losing their jobs.

What do you think of McMahon’s absence? What will her absence mean? Let us know in the comments below. 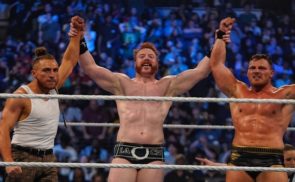 Get A Name Tag: WWE Seems To Make Change To Current Stable