Rampage is back to normal this week and that should make for a decent enough show. You never know what you’re going to get around here, though odds are you’ll get at least one important thing. Other than that though, there is a good chance you’ll be seeing some names who aren’t around on Dynamite very often. Let’s get to it.

Tag Team Titles: Acclaimed vs. Butcher and the Blade vs. Private Party

Acclaimed, with Billy Gunn, is defending. Bowens and Kassidy start things off as Matt Hardy is watching in the back. They trade quick one counts as the fans sing in praise of the Acclaimed. A standoff gives us a handshake before Bowens drives Kassidy into the corner for the tag off to Castor. With Kassidy down, Castor stops for some scissoring with Gunn before Bowens comes in for a neckbreaker onto Castor’s knees.

Quen comes in and gets a middle rope legdrop between the legs. That’s enough for Butcher and the Blade, who come in and run the champs over. Bowens fights back up and is quickly headbutted right back down. We take a break and come back with Bowens powering out of Blade’s chinlock but getting powerslammed instead.

A superkick drops Blade hard but it’s Private Party tagging themselves back in to clean house. Private Party hits the Motor City Machine Guns’ Skull & Bones (with a Swanton instead of a splash) for two on Blade with Castor making the save. Everything breaks down again and Kassidy hits a dive of his own. Castor hits his own dive and sends Blade back inside, where it’s the Arrival into the Mic Drop to retain the titles at 9:58.

Result: Acclaimed b. Private Party and Butcher and the Blade – Mic Drop to Blade (9:58)

The Firm mock FTR for holding various Tag Team Titles, which they can’t remember anyway. The Gunn Club wants the Tag Team Titles and bring up FTR for being #1 contenders for almost six months. They’ll leapfrog FTR too.

Jade Cargill mocks AEW for giving her no competition but Vickie Guerrero, Marina Shafir and Nyla Rose come in. Cargill says Rose can have a title match but on Jade’s time.

W. Morrissey and Stokely Hathaway are here with Moriarty. Fuego gets taken to the mat to start and then uppercutted up against the ropes. Some stomps keep Fuego in trouble and a Border City Stretch finishes him off at 1:57.

Hangman Page is ready for Jon Moxley and the Dark Order will be in their corner. Andrade and Jose the Assistant come in to mock 10. Next week is the anniversary of Brodie Lee’s last match so Andrade has an idea: they have a match next week, with the mask Brodie Lee gave 10 vs. Andrade’s career. That could be interesting. The Firm comes in to mock Andrade and brings up Matt Hardy’s contract tampering with Private Party.

Rebel and Britt Baker are here with Hayter. Nightingale takes her down and fires off some headbutts until Hayter fights up for an exchange of shoulders. Hayter gets dropped for a basement crossbody and splash for two. Some chops have Hayter in more trouble but she’s right back with a big boot to drop Nightingale hard (and Baker dances).

We take a break and come back with Hayter hitting a backbreaker for two. Nightingale pops up and hits a heck of a Pounce out to the floor to rock Hayter hard. Back in and a Death Valley Driver gives Nightingale two so it’s time to go up top. Baker offers a distraction though and it’s a shortarm clothesline to give Hayter the pin at 8:08.

Video on Wardlow and Samoa Joe, because the best use of two of your midcard champions is to have them team together.

Here is Ryan Nemeth to mock various Philadelphia legends until Hook comes out to wreck him. As Hook is going to leave, the Trustbusters come out with an envelope with his name on it, which Hook takes.

Video on Swerve Strickland at a music festival.

John Silver and Rush are ready for the main event.

Here’s what is coming on upcoming shows.

Trent Beretta is ready for Pac and the All Atlantic Title at Battle of the Belts.

Alex Reynolds, Andrade and Jose the Assistant are here too. Silver grabs a headlock to start and a running elbow sends Rush outside. The dive is loaded up but Silver flips down into the Tranquilo pose for a nice touch. Rush comes back in and hammers on Silver, even knocking him outside for a whip into the barricade. Back in and the running corner dropkick is loaded up, only to have Rush hit the cocky kick instead.

We take a break and come back with Silver hitting some corner clotheslines, followed by the rolling German suplexes. A sitout powerbomb gives Silver two and it’s time to slap it out. That goes to the bigger/stronger Rush but Silver grabs a brainbuster for two more. Jose tries to interfere so Reynolds pulls him down. The distraction lets Rush hit a running forearm into the corner though, setting up the Bull’s Horns for the pin at 10:55.

Post match the beatdown is on, with Butcher and the Blade joining in. The rest of the Dark Order and Hangman Page run in for the save to end the show. 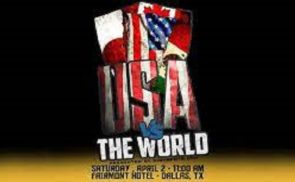 REVIEW: WrestleCon USA vs. The World 2022: The Better Version 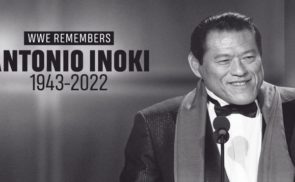 Antonio Inoki Passes Away At Age 79