The biggest week in AEW history wraps up here with a pay per view quality match. This week’s feature match will see Pac vs. Andrade El Idolo in a match that was supposed to take place at All Out. Instead it is happening here, along with hometown boy Brian Pillman Jr. facing the rather rude Max Caster. Let’s get to it.

Chavo Guerrero is here with Idolo. They stare each other down to start before going at it in a hurry. Andrade catches him with a basement dropkick and we hit the Tranquilo pose. Some kicks in the ribs just wake Pac up and he hurricanranas Andrade outside for the big running flip dive. Pac whips him hard into the barricade and we hit the chinlock back inside. Andrade snaps off a running boot to the face and a hanging DDT onto the apron sends Pac hard to the floor.

That means Andrade can hit his own big dive but it’s only good for one back inside. Pac gets up top but gets caught on the ropes, setting up the Alberto double stomp to put them both down on the floor as we take a break. Back with Andrade hitting a top rope split legged moonsault for two. With that not working, Pac is taken to the top but manages a super hurricanrana to bring Andrade right back down.

The running boot in the face rocks Andrade again to put him on the apron. Pac can’t hit a running sunset bomb to the floor so it’s a superkick to stagger Andrade instead. A huge moonsault to the floor has Andrade down again, though Pac might have hit his head on the barricade. Back in and a 450 connects for Pac but the Black Arrow is broken up. A running Pele kick rocks Pac again but he drives Andrade into the corner to block the hammerlock DDT.

Andrade charges into an overhead belly to belly into the corner but he catches Pac in the fireman’s carry. That’s countered into a crucifix bomb into the Brutalizer, which draws Andrade’s translator onto the apron with a stun gun to distract Pac. The Lucha Bros run out to take care of him but Chavo gets in a cheap shot to knock Pac silly. Andrade steals the pin at 15:42.

Post match Chavo and Andrade go to leave but Andrade turns on Chavo and slams his head into the ramp. With Andrade gone, the Lucha Bros superkick Chavo so Pac can grab the Brutalizer. Referees come down and finally break it up so Death Triangle can pose.

Here are Darby Allin and Sting to answer Tully Blanchard’s challenge from Dynamite. Allin calls Shawn Spears a generic piece of s*** who has ridden Blanchard’s coattails. After a loud scream, Sting calls out Blanchard for riding Ric Flair and Arn Anderson’s coattails for years. We can do it right now, so here is Tully to talk about the numbers game. Sting is distracted and doesn’t notice Spears running in to plant Allin with the C4 on the floor.

Adam Cole talks about what it means to be in the Elite because they are the best. Fans respect Bryan Danielson and Christian Cage because their body of work is so special. Cole isn’t even in his prime yet and he would mop the floor with Bryan Danielson.

Bryan Danielson says that the Elite feels and looks insecure and he is going after one specific member of the team. He would love to face Kenny Omega in his first match but if he isn’t stepping up, someone else will. Everyone is hungry around here so let’s go.

Riho takes Baker down to start so it’s time to rethink things. Statlander comes in to muscle Baker over with a powerslam and picks Riho up to kick Rebel in the chest for a funny spot. Tony: “What do you call that Excalibur?” Taz: “Well he’s not here.” Hayter comes in but Rebel hits a cheap shot from the apron as we take a break.

Back with Riho fighting out of a chinlock so Hayter goes over to knock Statlander off the apron. She doesn’t knock Soho down though, meaning Riho can kick Hayter away and make the tag. A running kick to the face rocks Hayter and an STO gets two. Everything breaks down and Statlander rolls Rebel up until Baker breaks it up for the save. Statlander is back up with a twisting Falcon Arrow to Baker, with Riho getting on Statlander’s shoulders. Riho covers Baker up so Riho double stomps her instead. Soho comes back in for the former Riott Kick and the pin on Rebel at 9:27.

We get the face to face interview between Max Caster and Brian Pillman Jr. Caster is sick of Pillman having so many fake friends but they won’t be here tonight. Anthony Bowens says Caster is going to beat up Pillman’s Saved By The Bell reunion looking face. Pillman is going to prove if Caster can back up his talk because they’re in Cincinnati and Pillman is coming at him 100mph.

Caster’s rap insults Cincinnati, but Bowens grabs the mic before he can say what a bowl of Skyline Chili looks like. Bowens: “YOU’RE ON THIN ICE!” Pillman takes him down and rains down right hands to start. Caster is sent outside for the dropkick through the ropes but Bowens breaks up Air Pillman back inside. That’s enough for Caster to get in some right hands in the corner and a knee drop gets two.

Caster sends him outside so Bowens can get in some stomping, followed by Caster’s dropkick to the back for two. The chinlock doesn’t last long as Pillman makes the comeback and pounds away with the right hands in the corner. Bowens’ interference lets Caster score with a right hand on top but Pillman shoves him away. A dive takes Bowens out so Caster can get in a shot of his own. The Mic Drop misses though and Air Pillman finishes Caster at 6:41.

Post match Bowens comes in to jump Pillman and the double team is on. Cue fellow Cincinnati native Jon Moxley for the save and thoroughly please the live crowd to end the show. 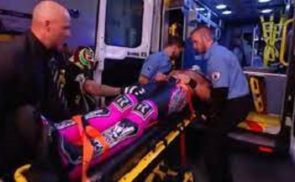