It’s tournament time as we get the first match in the World Title #1 contenders tournament. That alone should be enough, but we also get a rematch between Andrade El Idolo and Pac. The first one was a heck of a fight and the rematch could live up to the expectations so let’s get to it.

Cassidy has bad ribs coming in. We see a clip of Cassidy beating an unknown Hobbs in twelve seconds in July 2020, with Taz promising that will not happen again. Hobbs hits a spinebuster for an early two as Matt Hardy is pleased from the crowd. Cassidy’s ribs are bent around the post and a side slam gives Hobbs two. A clothesline cuts off Cassidy’s comeback attempt and we take a break.

Back with Hobbs staying on the ribs, including a torture rack. Cassidy slips out and grabs a small package for two but the Orange Punch is pulled out of the air. Some splashes in the corner have Cassidy in more trouble but the referee threatens to DQ Hobbs. That means some yelling, allowing Cassidy to grab the Mousetrap for the pin at 8:18.

Here is Penta El Zero Miedo for a chat but hold on because he sees Las Super Ranas in the crowd.  Penta goes over to them, allowing the real FTR to jump him from behind. Pac makes the save.

Non-title and Baker has Jamie Hayter and Rebel with her. Baker takes her up against the ropes to start but has to fight out of the Queenslayer attempt. Anna grabs a headlock so Baker fights up, only to get Downward Spiraled into a Koji Clutch. That’s broken up as well and Baker sends her face first into the corner and we take a break.

Back with Baker cutting off a comeback with a swinging neckbreaker but it’s time to load up the glove. The Lockjaw is blocked though and it’s off to some grappling on the mat, with Anna getting in the Queenslayer. Hayter offers a distraction though and the hold is broken, only to have Anna grab it again. Baker can’t climb the corner to flip back over so it’s a rope break for the escape instead. Back up and Baker hits a superkick to set up Lockjaw for the tap at 10:30.

Post match Baker puts it on again but Tay Conti comes in to make the save. The villains bail and Conti holds up the title.

Here are the brackets for the TBS Title tournament:

Tony Schiavone handles the face to face interview between Andrade El Idolo and Pac. Andrade promises to beat Pac tonight and brags about having friends around the world. Pac cuts Tony off and says this should have been settled weeks ago. Now it is time to settle this man to man.

Everyone else is barred from ringside. Pac wastes no time in knocking Andrade outside and hitting the big dive. Back in and the Black Arrow is broken up but Pac is right back to his feet to pick up the pace. Pac goes to the apron, where Andrade scores with a running boot to the face to put him on the floor. A running corkscrew dive takes Pac down again and we take a break with both of them outside.

Back with Andrade getting a near fall off Three Amigos and kicking Pac in the head to cut him off again. Andrade tries a slingshot dropkick but falls off the apron and crashes hard down to the floor. Pac whips him back first into an open chair but can’t get the Brutalizer back inside.

Andrade pulls him out to the apron and they slug it out until Pac is draped over the top rope. That lets Andrade jump back in and then right back out for a DDT to drive Pac into the apron for a nasty landing. Back in and Pac hits a brainbuster for two but Andrade hits him in the face. The hammerlock DDT is countered into a rollup for two so Andrade tries it again, only to get small packaged to give Pac the pin at 16:20.

Post match the lights are out….and it’s Malakai Black to mist Pac. Andrade tells Black to bring in a chair but Arn Anderson comes out to point at Black. Cue Cody Rhodes to clear out Andrade and powerslam Black. The threat of a chair shot sends Black bailing to end the show. 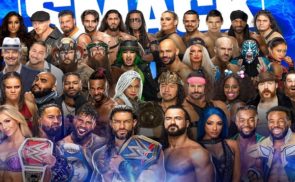 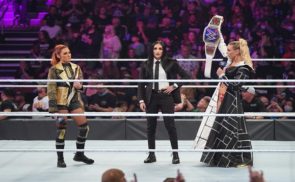