You might notice an interesting guest star here as Iron Mike Tyson is making another appearance for the company. I’m not sure how well that is going to go, but Tyson is likely going to bring some energy. The big match this week is a special appearance by Katsuyori Shibata as he challenges Orange Cassidy for the All-Atlantic Title. Let’s get to it.

Mike Tyson gets a special entrance.

Video on Katsuyori Shibata, who hits people very hard and is back after what appeared to be a career ending injury.

Cassidy is defending. They stare each other down so Shibata grabs a headlock takeover. A headscissors gets Cassidy out of trouble before cranking on the ankle. Shibata misses the big kick to the head and gets forearmed off the apron, setting up the suicide dive. Back up and Shibata sends him into the barricade a few times, allowing the sitdown pose back inside. Cassidy shrugs it off and sends him into the barricade as well but they both have to dive back inside to beat the count.

We take a break and come back with Cassidy hitting a running corner dropkick and the lazy kicks for the mind games. The lazy superkick is blocked though and now Cassidy is willing to pick up the pace. Shibata cuts him off with an STO (as called by Tyson) and hits his own lazy kicks. That makes Cassidy sit down as well, with Shibata sitting right in front of him. Cassidy gently slaps him so Shibata blasts him with a forearm before unloading in the corner.

Back up and they knock each other down, allowing us to look at Tyson watching the match. It’s Cassidy up first with a running penalty kick so Shibata tells him to do it again. That’s what Cassidy does before more kicks have no effect. A big running kick manages to knock Cassidy do but Shibata is back up with something like an Orange Punch to knock Cassidy silly. The octopus goes on and they fall to the mat, where Cassidy gets his foot on the rope.

The Stundog Millionaire gets Cassidy out of trouble and he fires off some lazy Kawada kicks. Shibata is right back with a Death Valley Driver but Cassidy counters another one into a Stunner. The Beach Break gives Cassidy two and the Orange Punch….doesn’t actually knock Shibata down. Instead Shibata is up with the choke before suplexing Cassidy back down. The Penalty kick is loaded up but Cassidy pops to his feet for the Orange Punch to retain at 11:10.

Respect is shown post match and Cassidy gives Shibata his sunglasses, while also cracking a smile.

That’s it for Tyson.

The Blackpool Combat Club isn’t happy with Chris Jericho going too far against Ring Of Honor. Why is he going after non-wrestlers like Ian Riccaboni? If Jericho wants to go after the Ring Of Honor World Champions, come after Claudio Castagnoli and Bryan Danielson. William Regal tells Jericho to make his choice.

Rebel is here with the villains. Rayne takes Hayter into the corner to start and Blue cuts Hayter off with a raised boot. A high crossbody gives Blue two but Hayter cuts her off with a hot shot as we take a break. Back with Hayter and Blue knocking each other down, allowing Blue to kick Baker in the head as well for the tag off to Rayne.

House is cleaned and a neckbreaker gets two on Baker, followed by a cutter for a bonus. Hayter is back in with what looked like a chokebreaker to Rayne but Blue gives her a Backstabber. Baker kicks Blue down and hits the fisherman’s neckbreaker for two on Rayne. The villains hit stereo superkicks and Hayter adds the ripcord lariat for the pin at 7:18.

Post match Baker mocks Toni Storm and promises Hayter is winning the title at Full Gear. Cue Storm, who drops Rebel with one hand, beats up Baker and Thesz presses Hayter to start the brawl. As you would in any fight, Storm grabs a Texas Cloverleaf but Baker comes in with a belt shot to knock her silly. Hayter gets to hold up the title.

We look at Chris Jericho calling out Lamar Jackson on Dynamite, plus the Baltimore Ravens (Jackson’s team) tweeting a response to Jericho.

Tony Schiavone talks to Sammy Guevara and Chris Jericho about the Blackpool Combat Club’s challenge. Jericho is thinking about saying both, because the Club doesn’t like each other. So how about the three of them and Sammy in a four way for the title. Jericho suggest that Sammy would “do the right thing”, which doesn’t seem to sit well with him.

Here is Ricky Starks for a chat. Starks asks if you can hear the crowd reaction because he knows people are asking to see him get on TV. He has never had to ask the fans to have his back because they know he can deliver. The people like to see him do the pose and he likes them too.

There is a question that people want to know and that is about the eliminator tournament. Starks is one of those six answers, because he is officially entering. Things are crumbling around here but he is going to hold it up on his bare back. He’s ready to face Jon Moxley or MJF because he is Ricky Freaking Starks.

Sammy Guevara is ready to keep the Ring Of Honor World Title in the Jericho Appreciation Society, but for now he wants to talk about Bryan Danielson. He wants a rematch and he wants it next week on Dynamite, 2/3 falls.

Samoa Joe/Wardlow and the Gates of Agony are ready for each other. Oh and Wardlow wants Powerhouse Hobbs to come get him.

We get the brackets for the Full Gear tournament:

Samoa Joe/Wardlow vs. Gates of Agony

Prince Nana is here with the Gates. Wardlow misses a clothesline to Kaun to start but is fine enough to drive him into the corner. A clothesline drops Kaun again before Wardlow opts to just hammer away at the head. Joe comes in and slugs at Loa before hitting the corner enziguri. Kaun gets in a cheap shot from the apron though and Loa runs Joe over for two.

We take a break and come back with Joe fighting out of a dropkick and Rock Bottoming him out of the corner. Wardlow comes back in for a bunch of German suplexes as everything breaks down. The wind up punch drops Kaun and Wardlow shrugs off a knee to the face. The four movement Powerbomb Symphony finishes Kaun at 9:11.

Post match Powerhouse Hobbs comes out to stare down Wardlow to end the show. 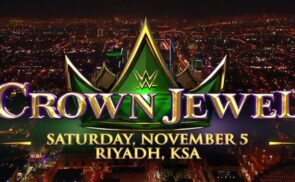 REVIEW: Super ShowDown 2020: So Much For The Fiend