Impact Wrestling executive Scott D’Amore recently spoke to Sports Illustrated’s ‘Extra Mustard’ section on Alberto El Patron being released, getting fans interested in the product again and his vision for the company.

D’Amore first explained why he and Impact Wrestling had to release Patron:

“It was obviously an unfortunate situation. When Alberto failed to show up to the event, we made our decision on a new main event for the show. It was important for us to give our fans, in a capacity crowd at the Sugar Mill in New Orleans, a great event, and we did not want them to focus on someone who wasn’t there. We wanted them to focus on the match we were giving. Those three guys went out, were so professional, and put on an amazing match. Then we sat down and huddled.”

D’Amore comments on how he can get fans interested in Impact Wrestling:

“One of the things we need to do as a company is build trust. We need the fans to know that when we say we are going to deliver something, that we’ll deliver it. Yeah, we did not feel good about advertising something and not delivering it, and we were not going to put ourselves in a situation where that could happen again at Redemption. We saw a match that had people buzzing with the live crowd and had feedback through the roof on our live Twitch broadcast, and we decided to go with that as a rematch for our pay-per-view main event. Austin Aries, Pentagon, and Fenix squaring off in a three-way for the world title gives us a great main event on top of an outstanding card.”

Finally, D’Amore discusses what his vision is for how Impact Wrestling should be portrayed:

“Taking an athletic, modern-style product and applying some good old-fashioned storytelling to it. We can have more of a guerrilla approach and be more gritty. We can do some things that WWE is never going to do because they have such a high standard of production and it’s just not going to work for them.”

Check out D’Amore and Josh Matthews discuss Impact Wrestling together in the video below:

Are you enjoying D’Amore’s work on Impact Wrestling? Do you watch the product? 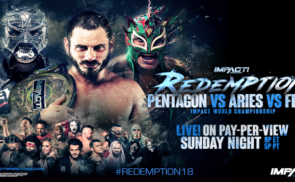