Wedding Bells are ringing! According to People magazine, Alexa Bliss married her long-time sweetheart, musician Ryan Cabrera, over the weekend. Their wedding was “very non-traditional,” “rockstar” and self-described as “the s–tshow.”

The couple was interviewed two weeks prior to their wedding; below are some highlights:

On their wedding venue:

“We were like, ‘Oh my God,’ it’s absolutely perfect,” Cabrera said. “It’s absolutely gorgeous and nestled within the mountains. At the bottom, there are vineyards, and behind the house there’s a beautiful lake. It’s just far enough outside of Los Angeles, too.”

On coming down the aisle to Cabrera’s song “Worth It:”

“I’m just trying to figure out how I’m going to get through this because it’s such an emotional song,” Cabrera said. “I don’t think she understands, because we were talking about doing our vows, and I was like, ‘Maybe we should do it in private.’ I cry a lot! I can’t help it. I’m that guy. It is what it is. I’m emotional, so it’s going to be waterworks.”

On his wedding vows:

“Mine came to me in a dream,” Cabrera said. “It was like 4 a.m., and I had this dream about me reading the vows to her. I was uncontrollably crying, but I was reading the vows, and I was like, ‘Oh, that’s good stuff!’ So I woke up in the middle of the night and started jotting it down. That led to writing more and more and more. I’ll probably be tweaking up until the day of, but that’s just the writer in me … or I may just scratch it and go improv.”

“The bottom of my dress has four different layers of tulle — two of them are glitter tulle, and one of them is blush,” Bliss added. “There is a long train in the back that’s all glitter, but it has a bustle in the back too, to lift it up so I can dance and all the things. It’s very whimsical, very fairytale-esque.”

They also discuss other aspects of the wedding, including the atmosphere, music and more. 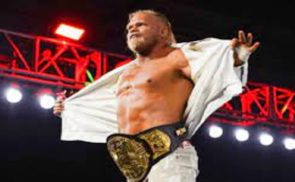 VIDEO: World Champion Releases Album, Jams To His Own Music