Little more warning next time please. With so many wrestlers on the WWE roster, it can be difficult to keep track of what all of them are doing. There are a lot of different ways to present WWE’s collection of stars, but sometimes they go away for a bit before getting to come back and showcase themselves again. That is the case with a certain WWE legend, but now we know when he will be back.

Last week on Monday Night Raw, Edge was taken out at the hands of Judgment Day, with the team injuring Edge’s knee in the process. As a result, Edge was put out of action indefinitely. Now though, WWE is advertising Edge for Extreme Rules on October 8, with no match announced so far. Edge last wrestled at Clash At The Castle, teaming with Rey Mysterio to defeat Judgment Day.

Opinion: I don’t think there is any surprise that Edge will be back at Extreme Rules but it might not have been the best idea to flat out say that he is going to be there so soon. It isn’t like it is some horrible storyline breaker to have Edge advertised in advance, but this is still a weird way to go. If Edge was only going to be gone for a few weeks, it almost feels like he didn’t even need to be written off of television in the first place.

What do you think of Edge? What should he do at Extreme Rules? Let us know in the comments below. 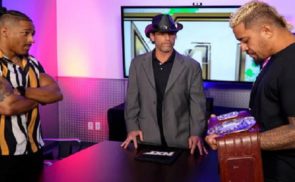