A hint appears. Despite not being around for very long, AEW Dynamite has become one of the best wrestling shows airing in the world today. Every week offers a great variety of action, storytelling and entertainment, all of which add up to a heck of a show. There are a lot of stories going on at the same time and we might know where one of them is leading at the moment.

One of the more discussed stories in all of the company has been the Dark Order. While the wrestling has not been the most well received, there is an interesting part involving the group’s potential leader. The Dark Order has been talking about how the Exalted One is coming and fans are now wondering who the leader of the group is. While it may be a false clue, we might have an idea of who is behind the whole thing.

The Dark Order has been teasing something. Check out some of what they have been saying:

Opinion: This is a situation where there are likely to be several red herrings and that makes it all the more interesting. With so many possible names out there, it is turning into a whodunit, which can be a fun story to have. Archer is a distinct possibility, as is Hardy. Or it could be someone completely out of left field, which is why this story is that good. I’m curious to see who it is, meaning they are doing something right.

Who do you think the Exalted One will be? Who do you want it to be? Let us know in the comments below. 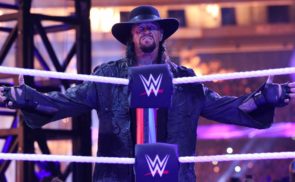