There’s nothing like it anywhere else. Over the last few years, Matt Hardy has reinvented himself (again) by inventing the Broken Universe. The concept is one of the most unique in recent years and it has received new life now that Hardy has joined AEW. The unique method of speaking and thinking has changed a lot, and now it has changed a couple’s lives forever.

While there are all kinds of things that make the Broken Universe work, Hardy’s speaking and syntax have made it work more than anything else. He manages to sound unique while also referencing nearly every possible connection with whatever he is talking about at the moment. That was the case recently as Hardy got involved with someone asking one of the most important questions in the world.

This is just cool. Check out what Hardy got to do:

Hardy has released a video on Twitter showing himself cutting a promo while a couple, Mike and Dusti, watch from their couch. After challenging Chris Jericho to come face him at the Hardy Compound, Hardy brings up Dusti and Mike, saying they have been together for years. Hardy then asks if Dusti will accept Mike’s wedding proposal, with Dusti accepting and asking how this all came together.

Opinion: How do you not smile at something like this? The look on Dusti’s face when she realizes that the promo is talking about her directly is amazing and the stunned voice when she says “HOW?” is great. This is the kind of thing that you don’t get to see very often but when it works, it works out very well. I loved this and it’s something that should make you smile, at least a little bit.

What did you think of the proposal? How far can the Broken Universe go in AEW? Let us know in the comments below. 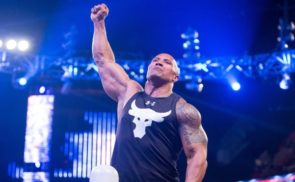