How Unique. Check Out A History Of Custom Championship Belts.

Everyone can have something unique. Earlier this week Daniel Bryan unveiled his own custom WWE Championship belt. The new title was made out of wood and hemp, reflecting Bryan’s pro-environmentalist stances. This new title fit him perfectly and is the kind of thing that only Bryan would use. As it turns out, this isn’t the first time something like this has happened.

What’s under the blanket? Check out the latest WWE Top Ten:

WWE has released a new Top Ten video, looking at Memorable Title Reveals. This video was inspired by two recent instances over the last few weeks when new titles were unveiled. In these cases, those titles were Bryan’s new WWE Title and the new Women’s Tag Team Titles. Some of these titles would stick around permanently while others were just there for individual title reigns.

Opinion: These things can be hit or miss, but a lot of that depends on how the new title looks. Some of them are rather nice but others not so much, which tends to be the case with all titles. It helps when the title is iconic and stands the test of time, though some of these are just flat out failures and not something that was going to work no matter how the reveals went.

Which of these was best? What did WWE leave off of the list? Let us know in the comments below. 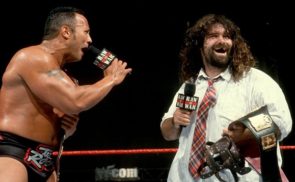 The Best Of The Wackiest. Here Are The Top Five Weird Tag Team Champions.