Call it an eye for talent. WWE has a lot of resources available to it and one of their biggest is the talent roster. The company is able to stockpile wrestlers in NXT and call them up when necessary. That can lead to some interesting moments when someone gets to make their main roster debut. That was to be the case recently, but a last minute change shook things up.

Last month, WWE released a group of NXT wrestlers due to feeling that they were not progressing fast enough. One of the names released was Harland, who had been serving as Joe Gacy’s enforcer. According to the Wrestling Observer Newsletter, Edge had picked Harland to be the fourth member of the Judgment Day stable but the company let him go instead. While not specified, it is said that this is due to WWE finding out something about Harland that warranted the release.

Opinion: I’m not sure what happened here, but Harland being called up to the main roster so fast after his debut would certainly have been a change. Harland only wrestled short matches in NXT in the first place and I don’t know if he would have been ready for such a jump. Edge saw something in him though and that alone could be a way for Harland to continue his wrestling career elsewhere.

What did you think of Harland? How would he have done in the stable? Let us know in the comments below. 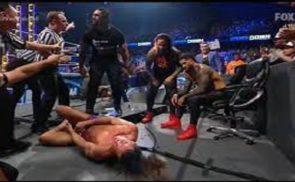