That’s A Record: Title Change Takes Place At AEW Battle Of The Belts

History has been made! There are a lot of titles in the wrestling world and some of them are defended very regularly. A title change means a lot as you can see the new direction a company is taking. While they don’t happen very often, it still means a lot when one does. That was the situation again this week as a former champion regained the title in a pretty big grudge match.

This weekend at AEW Battle Of The Belts, Sammy Guevara defeated Scorpio Sky to win the TNT Title for a record tying third time. The win came as Guevara hit Sky low and gave him the GTH for the pin. This came after the two had been feuding for several weeks with Sky refusing to give Guevara a title match. Sky had taken the title from Guevara in March, holding it for 36 days.

Opinion: I’m a bit surprised by the title change but it is the kind of thing that you need to have on a show built around championships. Guevara seems like he is heading for a turn to the dark side as well so things could be getting even more interesting I could have gone for Sky holding the title even longer though, and that makes me wonder what is next for everyone involved.

What did you think of the title change? How will Guevara do as champion? Let us know in the comments below. 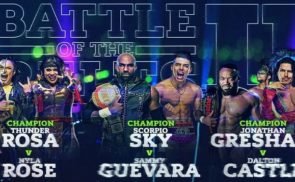 AEW Battle Of The Belts II Live Coverage And Results 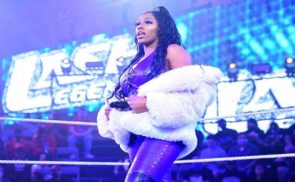 Some More NXT Wrestlers Are Heading To Another Show