It was worth the wait. There are some wrestlers who do not last long in the industry for one reason or another. Maybe they do not like it or maybe they aren’t cut out for what they are doing, but for some reason it just doesn’t work. At the same time, there are some people who feel like lifers and eventually make it big. It can be a long road to get there, but the eventual win can make it worth the wait. That might have been the case this weekend.

Matt Cardona, better known as Zack Ryder, won the NWA World Title from Trevor Murdoch Saturday night at the NWA Super Powerrr event, which will air next Tuesday. Cardona has been wrestling on the independent circuit as well as in Impact Wrestling since his release from WWE in April 2020. Since then, he has also won the Game Changer Wrestling World Title, defeating Nick Gage for the title in July 2021.

Opinion: Cardona continues to be one of the most impressive stars going today as he keeps managing to get over in one promotion after another. That is something that most wrestlers do not manage to pull off and it makes WWE look like they missed the boat more every time. I keep looking forward to seeing what Cardona does next and it is fascinating to see him keep getting further and further in his career.

What do you think of Cardona? How will he do as champion? Let us know in the comments below. 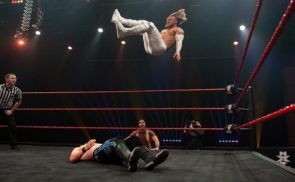