We are officially done with Best In The World, though I haven’t quite wrapped up the show itself. Thankfully Ring of Honor gives you a pretty nice cushion with the TV shows not meaning much for the next few weeks. Therefore, this show is likely going to be about taking care of some more minor stories that didn’t make the pay per view, so let’s get to it.

Quinn McKay hypes up the pay per view.

Caballero and Keys are both terrified coming in. Keys: “We’re gonna get our a**** whipped.” Mark and Keys start things off with Mark taking it to the mat in a hurry. It’s already off to Jay and we take an early break. Back with Jay hitting a basement dropkick and snapping off a suplex to give Mark one.

Keys actually manages a belly to back on Jay, allowing the tag off to Caballero. Jay slips out of a slam though and snaps off a hurricanrana. It’s back to Mark to clean house as commentary is rather pleased with the idea of the fans being back. Redneck Boogie plants Keys for two so it’s a neckbreaker into the Froggy Bow to put him away at 9:36.

Brian Johnson is on commentary and Gordon doesn’t want to talk before the match. On the other hand, Black brags about how many places he has wrestled, earning a shrug from McKay. They trade some grappling and near falls to start, with Black bailing to the ropes. An armdrag into an armbar has Gordon down but he comes back up with a right hand. Black is fine enough to grab an anklescissors to the floor, setting up the slingshot dive.

Back in and Gordon rolls outside to avoid a dive and ties Black in the ring skirt to hammer away. The springboard missile dropkick puts Black on the floor again and a heck of a superkick puts him down as we take a break. We come back with Gordon hitting a suplex and chopping Black into the ropes.

Gordon’s tornado DDT is countered into a suplex but Gordon snaps off a reverse Regal Roll. The running shooting star press gets two and they chop it out again. Black faceplants him for two before winning an exchange of forearms. Gordon is back with a Blue Thunder Bomb for his own near fall so it’s a rake to Black’s face, setting up the Flip Five. Submit To Flip makes Black tap at 16:34.

Post match Gordon goes after Black again but Brian Johnson runs in for the save.

Brian Zane joins commentary and that would be Brody King/Tony Deppen vs. Jonathan Gresham/Jay Lethal vs. Kenny King/Dragon Lee. Actually hang on a second as La Faccion has a seat at the timekeeper’s table before the opening bell, leaving it at two on two for the moment. Gresham and Deppen start things off with Deppen offering him the wrist, which does not seem to be so bright a move. They go to the mat for a standoff, with Gresham seeming rather confident. La Faccion pulls Gresham outside for a double suplex and we take a break.

Back with Lethal (now in a singlet) coming in to face King for a Best in the World preview. Now it’s La Faccion pulling Lethal outside for another double suplex, as one of the ring skirts has been pulled down as well. Back in and King drops Deppen onto Lethal for two and the chinlock goes on. That’s broken up and this time it’s Deppen being pulled outside for a double suplex of his own, leaving Brody as the odd man out.

Brody chases them away and Lethal uses the breather to bring Gresham in. Back in and Brody chokes Gresham on the rope but gets pulled outside….where he suplexes La Faccion for a change. The Foundation double teams Brody down for two but Lee makes the save, setting up a showdown with Gresham.

Lethal breaks that up and it’s Kenny coming back in for another showdown. After tossing Deppen outside, La Faccion double teams Gresham down for two. Brody comes back in for an attempted superplex on Lethal but Gresham breaks it up with a powerbomb. Deppen hits a Shining Wizard on Gresham but Kenny steals the pin at 17:43.

Best in the World rundown ends the show. 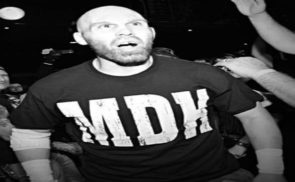