I guess he isn’t a fan. There are several different stories that can be told in wrestling and some of them can get rather intense. The best stories are often the most personal ones, with a wrestler’s life behind the camera occasionally being included. WWE wanted to do that again with a top star, but it turns out that he was not much of a fan of the concept being used.

During a recent edition of the Universal Wrestling Podcast, former WWE creative member Matt McCarthy told a story about a potential story involving WrestleMania. Former WWE executive Eric Pankowski suggested that an unnamed wrestler reference to Orton’s wife and daughter. According to McCarthy, Orton’s response was something similar to ‘Why don’t we keep my f***ing work at my f***ing work? Leave my f***ing family in my f***ing family’s house.’. There is nothing to suggest that the angle ever took place.

Opinion: This is one of those things that can be rather interesting and also understandable. Orton did not want something to take place so he shut it down. There is nothing wrong with that as Orton is completely justified in not wanting it to happen. If nothing else, it can be interesting to see what happens backstage when a wrestler isn’t interested in something being used on television.

What do you think of the idea? What is your favorite Orton story? Let us know in the comments below. 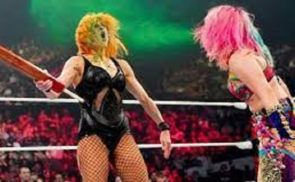