Ouch: NXT Star Out Of Action With Injury, Tournament Changed As A Result

Catch you later. Injuries are one of the worst things that can happen in wrestling as you never know when you are going to see someone left on the sidelines for a while. Any wrestler can get injured at any time and there is no way to know how long it is going to be before they will make it back into the ring. That is the case again, as an NXT star is out of action.

As announced on this week’s NXT, Nikkita Lyons has suffered an undisclosed injury and is out of action for the time being. This includes Lyons being removed from her second round match in the Women’s Breakout Tournament. There is no word on how long Lyons will be out of action. Tiffany Stratton talked her way into the match instead and defeated Fallon Henley to advance.

Opinion: That’s never good to hear and hopefully Lyons is back in the ring sooner rather than later. Assuming this is an actual injury and not a storyline, Lyons being out of action hurts a talented NXT women’s division. Lyons is not like many other stars in the division and it will be back to see her missing any kind of time. It will be good to see her back in the ring as she can do things that others can’t pull off.

What do you think of Lyons? What should she do when she gets back? Let us know in the comments below.

REVIEW: AEW Double Or Nothing 2021: It’s A Stampede 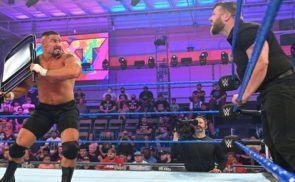