There is your big one. We are on the way to Double Or Nothing and now it means AEW needs to start getting the card ready. You can probably figure out some of the card from here, but at some point the matches need to be made official. This week, the biggest match on the card was covered, which was a bit trickier as one of the people involved was not there.

This week’s edition of AEW Dynamite featured the announcement that CM Punk will be challenging Hangman Page for the AEW World Title at Double Or Nothing on Saturday, May 29. The match will be the first ever between the two and Punk’s first ever shot at the title. Page was not present at the show as he was diagnosed with the Coronavirus earlier this week. There is nothing to suggest that he will not be back in time for the title match.

Opinion: This match was teased last week and it makes sense to have the two of them go at it for the title at one of the biggest AEW shows of the year. Punk is someone who has to go after the title at some point and Page is not going to be viewed as the truly top star without defeating people like Punk along the way. I’m not sure how the match is going to go, but just getting it announced is a big start. 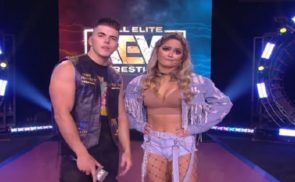