It’s the end of an era as we are going to see Walter’s final match around here. Walter is one of the people who has made this show feel special every time he appears and while it will be great to see him moving up the ladder, he is going to be missed around here. Hopefully there is a nice tribute to go with the match, so let’s get to it.

We open with a video looking back at Walter’s time in NXT UK.

Charlie Dempsey is here with Die Familia and the winners face Ashton Smith and Oliver Carter for the #1 contendership. Raja muscles Starz up to start and throws him away without much effort. They fight over a lockup but Raja throws him off a front facelock. Starz can’t take him down by the leg but he can take him down with an armbar. A headlock gives Starz two and some dropkicks send Raja into the corner.

That’s enough for Raja to need a breather so it’s off to Mastiff vs. Teoman. Mastiff doesn’t mind, as he runs both of them over and hands it back off to Starz for the elbow between the shoulders. Mastiff’s backsplash into a slingshot crossbody gets two on Teoman, meaning it’s finally time for Dempsey to offer a distraction. Starz gets tied up in the ring skirt as a result and the big beating is on to put the villains in control.

The armbar goes on and it’s back to Raja to work on both arms and a leg. Starz isn’t having any of this switching limbs/ignoring his other leg and fights out of the corner, allowing the diving tag off to Mastiff. House is cleaned in a hurry, including a suplex to Raja and a toss over the top to send Teoman to the floor. Dempsey tries to get involved again but here is Gallus to take care of them. Mastiff German suplexes Raja for the pin at 9:48.

Video on Walter’s path of dominance through NXT UK, with wrestlers talking about how awesome he is.

We look at Meiko Satomura retaining the Women’s Title over Blair Davenport last week, but Davenport laid her out after the match. The feud will continue.

Video on Jordan Devlin who wants the United Kingdom Title for the fame, while Ilja Dragunov wants to keep it to make things better for his family. The title match is in two weeks.

Jinny is on commentary. They strike it out to start but Amale sends her into the corner for a running clothesline. Turner kicks her in the face but gets knocked into the corner in a hurry. A running boot misses Turner so she takes Amale down to hammer away. There’s a knee lift for two and it’s time to work on both of Amale’s arms at once as we look at Jinny. Amale is back up with some clotheslines and a dropkick into the corner. Now the running boot connects, setting up a kind of Rock Bottom spinebuster for the pin on Turner at 4:00.

Pretty Deadly comes in to Sid Scala to complain about Sam Gradwell. Next week, they get to face Gradwell and a partner of his choosing. Scala doesn’t seem pleased.

Video on Walter’s dominance as the NXT UK Champion…until he met Ilja Dragunov for their pair of title matches.

Video on A-Kid vs. Noam Dar for the Heritage Cup. Kid wants the title back, but Dar wants revenge on Kid for eliminating him from the original Heritage Cup tournament. Now it is time to fight, because they both want something.

Amale is happy with her win but here is Jinny to mock her for being weak. Jinny gets shoved and they shout at each other a lot, with security breaking it up.

This is Walter’s Last Stand. The WALTER chants begin and Frazer starts to realize he’s in trouble. Walter throws him down to start and Frazer looks terrified. An armbar takes Frazer down and Walter isn’t having any of this flipping stuff for an escape. A dropkick staggers Walter so he puts Frazer on the apron and pats him on the head.

Frazer snaps into reality and starts striking away, earning himself a slam onto the turnbuckle. Walter chops him on the chest and steps on his face, sending Frazer crashing down to the floor. Back in and a hard slam takes Frazer down again, setting up the sleeper. That’s broken up and Frazer scores with some running forearms….until Walter kicks him in the face. The double arm crank with a knee in Frazer’s back goes on, followed by a hard fist to the chest.

It’s off to the chinlock for a change before Walter starts yelling at him. Frazer fires off some chops of his own and Nigel knows what’s coming. One Walter chop has Frazer looking like he has been shot but he manages to counter a powerbomb into a hurricanrana. Back up and Walter misses a dropkick, allowing Frazer to hit a running shooting star press. Frazer strikes away but has to flip out of a German suplex attempt.

Another boot rips Frazer’s head off but he is still able to counter another powerbomb into a Code Red for two. Frazer kicks away at the leg some more and some superkicks stagger Walter again. A Nightmare on Helm Street sends Walter outside, where Frazer hits a shotgun dropkick into the barricade.

Back in and Frazer kicks away some more, setting up a running chop block. A springboard takes too long though and Frazer gets chopped out of the air. The powerbomb is countered again and a low superkick rocks Walter. Seth Rollins’ (Frazer’s trainer) stomp sets up a frog splash for two but the Phoenix splash is broken up. Now the powerbomb can finally connect to finish Frazer at 14:01. 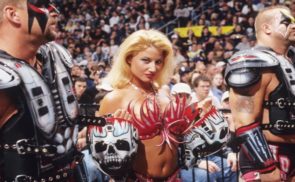