We’re on the way to Deadline and that means we need to add some people to the card. There are five spots each for the Iron Survivor matches and all of them need to be filled. Other than that, we could use some matches of any kind and that is where we probably start tonight. Let’s get to it.

Here is Toxic Attraction for a chat. Mandy Rose brags about keeping the Women’s Title last week, saying another one bit the dust. Now NXT has to set up this Iron Survivor Challenge to find a new contender for her title and she’ll be watching closely. Rose brags about their success but here are Kayden Carter and Katana Chance to interrupt. Carter mocks the idea of Rose doing everything herself and suggests that Jacy Jayne and Gigi Dolin will bail as soon as Rose loses the title. That’s enough for the fight to be on with Toxic Attraction dominating due to the numbers advantage.

Earlier today, Wes Lee arrived when Tony D’Angelo pulled up in his car. D’Angelo suggests revenge over Lee hurting him but Lee says D’Angelo knows where to find him.

Grayson Waller comes up to Duke Hudson and says Hudson isn’t the flag waving rah rah guy. Hudson says he is, because he’s a dedicated student.

Choo takes her down by the arm to start and Jade has to beg off into the ropes. Jade sends her throat first into the ropes and hits a running elbow to the back to take over. Back up and Choo hits a running boot in the corner, only to miss the sleeping elbow. Choo avoids a springboard stomp and sends Jade outside as we take a break. Back with Choo hitting a flipping forearm in the corner for two so Jade grade the stick. Choo takes it away so the referee takes it from her, allowing Jade to throw Choo’s drink into her eyes. A double arm DDT finishes Choo at 9:04.

Apollo Crews is ready for Bron Breakker and the NXT Title at Deadline. He has had all kinds of title matches but this is the one that he wakes up thinking about. This time, his vision is holding the NXT Title.

Kiana James is ready for revenge on Ivy Nile.

Javier Bernal has a 1,347 name list of people he wants to challenge, starting with Axiom, who is still hurt. #14 is Elon Musk because Bernal isn’t paying $8 for a check mark. McKenzie Mitchell: “How many followers do you have?” Bernal: “Two thousand. Million.” Drake (the rapper, not Maverick) is on the list, plus some unnamed wrestler who is retired. If Mitchell doesn’t lighten up, she’ll be the one he fights.

Chase U, now with several new students, are interrupted by Pretty Deadly, They wonder when Duke Hudson is going to be his usual self and a fight breaks out. Hudson holds his own against both of them until referees break it up.

Tatum Paxley is here with Nile. James grabs a headlock to start before muscling her up for an over the shoulder backbreaker. A drop to the knees makes it even worse for Nile and a belly to back suplex gives James two. Back up and Nile cranks on the arm before firing off some kicks. A running hurricanrana drops James to the floor, where Fallon Henley pops up to prevent an escape attempt. Back in and the Diamond Chain Lock finishes James at 4:39.

Post match the Creed Brothers come in to brag about Nile’s win before saying Indus Sher isn’t making their name off the two of them. They’re ready to fight anytime.

Isla Dawn brags about what she did to Alba Fyre last week and reveals she has been behind some of the recent tech glitches. She and Fyre will have so much fun together.

A banged up Duke Hudson comes in to see Andre Chase and says he got in a fight with Pretty Deadly. Chase: “Who?” Hudson says they were talking trash about the university and the repercussion is……a Tag Team Title match tonight (the fans are REALLY happy with that one)! The student Chase was talking to is very happy so Chase asks him what the **** is he still doing here. It’s time to prepare!

Scrypts walks around the barricade on the way to the ring and appears to be Reggie from the main roster.  Scrypts flips away from a charge and hammers away, setting up a Molly Go Round for the pin at 1:21.

Post match Scrypts leaves a card with his name on it on Raaj’s chest.

Here is Schism for a chat, with all of them sitting in chair, albeit with the one in the middle missing. Joe Gacy says it is their duty to reinforce the idea of having something to be thankful for. Ava Raine talks about how families are torn apart by Thanksgiving. Blood relatives cannot be counted on, but Schism certainly can be.

Raine goes outside to look at the crowd as we hear about how Thanksgiving has lost its intent. Raine gets a fan out of the crowd and lets him sit in the empty chair. Gacy talks about how their table is bare so new traditions can be forged. Then they sacrifice him with a release Rock Bottom through the table.

Trick Williams says Carmelo Hayes is ready, so Wes Lee comes in to say that means Williams doesn’t need to be out there for tonight’s title match. Williams eventually agrees, even if he doesn’t seem to do it on purpose.

Video on Bron Breakker going on a boat for some fishing, which is his happy place. He’s ready for Apollo Crews but needs to get away at times.

Ruca flips around to start so Stark superkicks her down for two. Stark sends her to the floor but Ruca gets tied up in the ring skirt, setting up the chinlock back inside. That’s broken up and Ruca hits a dropkick into a backdrop for two. A sunset flip gets the same and a flipping splash in the corner hits Starks as well. Ruca hits a powerslam but misses a dropkick, setting up the running knee to give Stark the pin at 4:20.

Post match, Nikkita Lyons runs in to clear out Stark.

Edris Enofe and Malik Blade get beaten up by Von Wagner in the parking lot.

Chase U, with Thea Hail, is challenging. Wilson runs Chase over to start but Chase is back up with a crawl through the legs into a cartwheel. Chase takes both champs down on his own before Hudson comes in to help him do the same. Back with Wilson keeping Chase in trouble in the corner and Hudson being lured to the floor.

Hudson accidentally runs Hail over but gets the hot tag a few seconds later. Everything breaks down and Hudson loads up the Fratliner. That doesn’t work though and it’s Hudson accidentally Kicking Chase in the face. With Hudson on the floor, Spilled Milk to Chase is enough to retain the titles at 11:49.

At a live event, Indi Hartwell and Roxanne Perez got in an argument as Elektra Lopez filmed everything.

Kayden Carter and Katana Chance recruit Nikkita Lyons (who has changed clothes since chasing off Stark) to go after Toxic Attraction.

Next week: Shawn Michaels reveals everyone in both Iron Survival Challenges.

Lee is defending (and has to jump over a rock during his entrance) and there is no Trick Williams here. They lock up to start with Hayes getting the better of things. That earns him a tackle and some right hands to the face, with Lee hammering him out to the floor. Back in and Lee misses a basement dropkick but dodges a springboard dive. Stereo kicks to the face put them both down and we take a break.

We come back with Lee fighting out of a chinlock but getting caught with a springboard spinning clothesline. Lee fights back and sends him into the corner for a running forearm, only to have Hayes come back with something close to La Mistica for two. Nothing But Net misses for Hayes and a running Meteora gives Lee two. Cue Williams for a distraction so Lee hits him with a running flip dive. Back in and Lee hits a backflip kick to the head Hayes again, setting up a Michinoku Driver for the pin to retain at 12:56.

Post match Dijak (yes Dijak) is back and hits Feast Your Eyes to knock Lee silly to end the show. 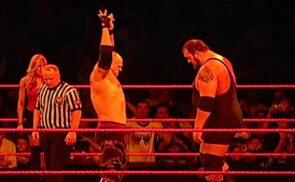