We’re back with another special show as it’s another two hour house show, this time from Australia. Again we’ve seen most of the main event but just like last week, we should get to see more than we already got a few weeks back. Other than that, almost none of this matters aside from having good matches. Let’s get to it.

Dawson and Moss start things off as the fans are rather into this early on. That goes nowhere so it’s off to Tino vs. Wilder as the slow pace continues. Tino slams Dash so Moss can get two off an elbow drop. Moss fights off Revival as Tino just stands there and lets the double teaming ensue.

Riddick can’t fight them off forever though and the top guys (Graves: “THEY’RE STILL TOP GUYS!”) take over as you might expect. An elbow finally misses and the diving tag brings in Tino for the house cleaning. Wilder pulls Sabbatelli to the floor though and Moss grabs a rollup for two. Back in and the Shatter Machine puts Moss away at 11:00.

Samson gets annoyed at the fans cutting off his singing until Roode cuts him off again for a much more popular entrance. Murphy is the home country boy here with Graves saying it’s so Murphy can know someone likes him. Roode starts with Murphy but lets Elias know he’s got an eye on the other Canadian.

We hit the posing early on with Graves suggesting that Phillips and Murphy go box kangaroos together. A kick to the face gives Murphy two as the fans chant TEN. It’s off to Dillinger but Roode bails before any contact is made. With the DRIFT AWAY chants rolling, Samson works on the arm and gets the ten treatment. A slingshot splash gets two and, according to Phillips, kangaroos can’t hop backwards.

Roode is dragged in but Tye beats both of them up anyway, only to be taken down by a knee to the back. The fans still don’t like Samson and call him some very rude names before switching to a GLORIOUS chant. For some reason Roode won’t rain down right hands in the corner so it’s an a superkick to set up the double tag. Murphy comes in and cleans house, including a hurricanrana to Roode. A flip dive takes him out, leaving Dillinger to hit the Tyebreaker to put Samson away at 11:19.

As expected, Kay is the big crowd favorite but bails to the floor so the other two can slug it out. Billie tries to steal a pin but gets caught in that rolling sunset flip to give Morgan some near falls. A double bulldog puts Kay and Moon down so Liv covers one but gets kicked out onto the other over and over.

Back up and Billie hits Eat Defeat for two on Moon, followed by an armbar into a suplex. The fans want to know if Billie will be their girl but settle for Liv getting superkicked off the apron. Moon kicks Billie in the face again and all three are knocked out to the floor. Back in and Kay gets double kicked but Liv breaks up the Eclipse. Instead, Billie powerbombs Liv off the top and walks into the Eclipse to give Moon the pin at 8:28.

TM61 is challenging and it’s Ciampa and Thorn trading near falls to start. That earns a quick handshake and the fans are VERY pleased so far. Miller and Gargano come in and it’s one heck of a right hand to send Johnny into the corner. A very delayed vertical suplex gets two on Gargano so it’s back to Ciampa for some arm cranking. Thorn gets two off a falcon’s arrow and we take a break.

Back with Ciampa breaking up a handspring elbow and bringing Gargano back in. Johnny grabs a sunset flip but leans forward and pulls on Thorn’s neck for a painful looking submission hold. That goes nowhere so Thorn dropkicks Ciampa so it can be back to Miller for the house cleaning. Johnny’s spear through the ropes cuts him off for another near fall. A tornado DDT/enziguri combo gives Gargano two more but Thorn powerbombs his own partner to set up a Tower of Doom on Ciampa.

Clever spot and Gargano shoving Miller into the pin for the save made it better. Project Ciampa gives us another near fall and the fans are WAY into the Aussies. Miller and Gargano slug it out in the middle of the ring with Johnny getting the better of it. Thorn is knocked to the floor and the running knee/superkick combo retains the titles at 18:18.

We get the big post match show of respect.

Recap of Nakamura vs. Joe.

Nakamura is defending and this is inside a cage. The champ takes him down by the leg to start but they grapple up against the ropes with neither being able to get much of an advantage. Joe gets taken into the corner for Good Vibrations so he sends Nakamura hard into the cage to even things up.

The corner enziguri gets two and we take an early break. Back with Joe kicking him in the face again and dropping an elbow for two. We hit the neck crank for a bit before Nakamura fights back up with the running kick to the face. Joe gets in his own kick but misses the backsplash to put both guys down for a bit.

It’s Joe up first with his rotating submissions but Nakamura slips out of the Crossface. Instead Joe sends him into the cage a few more times and we take a second break. Back with Nakamura hitting more knees to the head and lifting Joe for a big German suplex. Kinshasa is countered with a powerslam and the Koquina Clutch doesn’t last long. Nakamura knees him in the head again for two and BLASTS Joe with a top rope Kinshasa. Back to back regular versions retain the title at 26:15.

Replays wrap it up. 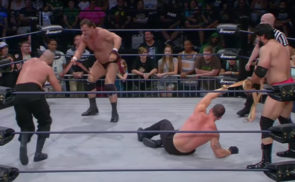 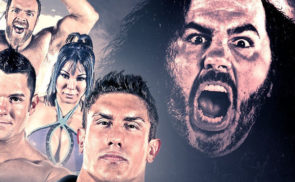 For Real This Time: TNA Is Under New Management