We’re taped this week and rapidly on the way to the Great American Bash in three weeks. That means it is time to start getting the show ready and odds are some of those things are going to be done this week. One of the bigger matches this week will see the Creed Brothers defending the Tag Team Titles so let’s get to it.

The Creeds are defending. Brutus takes Blade into the corner to start and then shoulders him into it again, only to have Blade come back with a headlock on Julius. It’s off to Enofe for the 619 in the corner, followed by a weird slow motion sunset flip for two. Enofe ties up the arms and pulls on Julius’ neck but some power gets Julius out of trouble. Brutus gets slammed onto Enofe for two and we hit the front facelock.

A northern lights suplex is enough for the escape and it’s back to Blade to pick up the pace. Enofe comes right back in for a dropkick but gets backdropped to the floor. There’s a double backdrop to Blade though and we take a break. Back with Brutus getting kicked in the face, setting up Enofe’s top rope elbow for two. The tag brings Julius back in though and everything breaks down, allowing Blade to get suplexed into the basement lariat for the pin at 13:53.

Indi Hartwell is sad about her love life but tells Roxanne Perez and Cora Jade to work hard. Cora calls her out for being an old grizzled veteran at 25, but what matters is that they’re ready for Toxic Attraction tonight.

Apollo Crews is sitting in a diner and writing about his WWE career in a journal. He has had great results in WWE, but he still hears the echoes of those three letters. Now he is going back to NXT….but we pause for him to fantasize about beating up a rude customer in a diner. Instead he goes over to said customer and asks if there is a problem, only to be told to get out of his face.

Wendy Choo is seen bouncing through Stratton’s entrance on a big ball. Stratton backs into the corner to start but Henley unloads on her with right hands. Henley gets caught in the ring skirt though and Stratton takes over on her, including a toss towards the ropes for a big crash down.

A slingshot Swanton gives Stratton two and we hit….a rather weird hold on Henley (picture the start of a Code Red, but Stratton bridges back to force a sitting Henley down to the mat). The comeback is on and Henley kicks her into the corner, only to get caught in a fall away slam. Cue Choo to throw confetti at Stratton, allowing Henley to grab a small package for the pin at 3:10.

Cameron Grimes is depressed but Bron Breakker tells him it’ll be ok. Grimes leaves and here is Duke Hudson to needle Breakker. The match seems set for some point in the future.

Lee tries an early rollup but Quinn picks him up for a drop onto the top rope. A running shoulder to the ribs into a backdrop has Lee down again as the dominance is on. Back up and Lee hits a backflip kick to the head, setting up the Spiral Tap for the pin at 2:48.

Joe Gacy is ready for the Dyad to win.

Video on Nathan Frazer, who is from Jersey (not New) and loved diving off of things on the beach. He was also really good soccer player and could have played in the EPL, but wound up following his dream of wrestling. To be continued.

Joe Cacy is here with the Dyad. We’ll say Dy takes Chen down to start before it’s off to Ad for a forearm to Chen. Dy, who is left handed, throws some shots to the head to put Chen down but Chen gets in a boot to the face. It’s back to Chen to start picking up the ace but a clothesline cuts him off. Everything breaks down and an elevated DDT (ala Danny Burch/Oney Lorcan) finishes Chen at 3:53.

Sanga is in the back with Yulisa Leon and Valentina Feroz when Xyon Quinn comes in. Words are exchanged, but Sanga standing up scares Quinn off.

Nikkita Lyons is coming back.

Here is Tony D’Angelo’s Family, complete with Legado del Fantasma. D’Angelo is pleased with Stacks and Two Dimes and gives them some cash. As for Legado, they need to understand the idea of the code of silence, which results in a rather forced handshake, much to the fans’ annoyance. D’Angelo has a family and the title of Don, but now he wants a title around his waist. Cue Carmelo Hayes and Trick Williams to say they don’t buy this. The title match is made for next week.

Breakker is defending but Hudson jumps him from behind before the bell. That’s fine with Breakker, who hits the running shoulders and a spear. The gorilla press powerslam retains the title at 43 seconds.

Post match here is Cameron Grimes to say she would like to finish his chat with Breakker. Grimes says Breakker has that title because of his last name, but no one knows who Grimes’ daddy was. That’s completely fine, but that’s the problem: Breakker’s dad was sitting in the front row watching him win a title while Grimes’ dad had to look down at him. Grimes is tired of the catchphrases so let’s launch the rocket and go to the moon at the Great American Bash. Breakker shakes his hand and we’re on.

Ivy Nile gives Tatum Paxley a bit of a pep talk. Roderick Strong and Damon Kemp come in and ask what is up with that, because Strong wants no excuses. The Creeds come in and Strong isn’t happy with them shaking hands after the title defense. Strong was right, but he gets to return to the ring next week. That doesn’t sit well with Strong, but he seems ready to go.

Vinci’s entrance includes a bunch of pictures being take of Vinci (photographers not included) with Vini, Vidi, Vinci on the screen. Vinci takes him down with a headlock takeover before hitting a hard running shoulder. Raaj fights up with a dropkick and that just annoys Vinci. A springboard spinning crossbody drops Raaj and a hard clothesline does it again. Vinci picks him up for a sitout Last Ride and the pin at 2:49.

Grayson Waller interrupts Solo Sikoa, who is so annoyed that he wants a match next week. Cool with Waller.

Malik Blade and Edris Enofe aren’t happy with their loss but they’ll get another shot. Cameron Grimes pops in to say they shouldn’t be this complacent. What if they never get another win like that? They’re trying to leave before the show is over because they’re not hungry. Grimes doesn’t want Enofe to waste his talent, because Grimes doesn’t waste his own.

The rest of the Family is here too. Hayes knocks Dimes down to start and Williams gets in a dropkick of his own. Two Dimes comes in to take over on Hayes and the beating is on, including a hard clothesline. A knee to the ribs keeps Hayes in trouble but something close to the Demolition Decapitator misses. Williams comes in to clean house so Legado tries to interfere, only to take Two Dimes out by mistake. That’s enough for Hayes to go up top for the ax kick and the pin at 4:20.

Legado gives a great “oh well” look after the match.

Post break D’Angelo yells at Legado, saying to get better, starting next week.

Mandy starts with Jade but quickly hands it off to Jane to pieface her. Jade takes over without much trouble so it’s off to Rose vs. Hartwell, with the latter grabbing a wristlock. A side slam drops Rose and we need a Toxic Attraction huddle on the floor. Back in and Toxic Attraction is knocked outside as we take a break.

We come back with Perez ankle scissoring Jayne down and grabbing a rollup for two. A discus forearm cuts Perez down for two and it’s time for the strike off. Perez rolls her way to freedom and it’s off to Hartwell to take Rose into the corner. Jade gets to clean house for a bit until Jayne takes her down for a kick to the back.

The double clothesline puts Jade and Rose down though, meaning Jade needs to crawl over to Hartwell. The referee doesn’t see the tag though and it’s Dolin taking over on Jade. That doesn’t last either though as the hot tag brings in Hartwell to clean house. Everything breaks down and Jade hits a top rope backsplash on Dolin, allowing Perez to get the pin at 13:45. 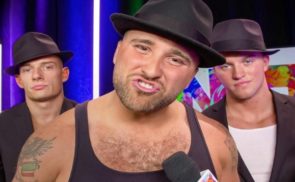 Injury Update On NXT Star, Might Not Be That Bad