There’s The Big One: Major Title Match Set For Special Show Next Month

There’s the big one. NXT has come a long way in its history but it still has a lot of things that it needs to do. The most important of these things is to continue to develop stars for the future of WWE, which is where the main event scene comes into play. The promotion has quite the talent roster, and now some of those stars are going to be meeting in a pretty high profile match.

This week on NXT, Cameron Grimes challenged Bron Breakker for an NXT Title shot at the Great American Bash on July 5, with Breakker accepting. Grimes spoke about how Breakker got where he is based on his name, while Grimes had no family legacy to get him started. The match will be the first between the two and is the first match officially set for the special television show.

Opinion: This is one of the bigger matches that NXT has available at the moment, as Grimes is a former North American Champion and established as a challenger. Grimes vs. Breakker should be a good match and I could go for seeing the two get some time together. If nothing else, it is the latest instance of Breakker getting to work with another talented start to see what he can do in the spot. 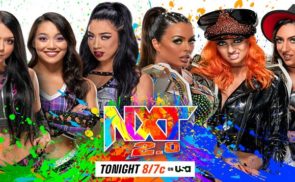