After last week’s title show, it’s time for another title show, which should make for a big week. This time around we have Meiko Satomura defending the NXT UK Women’s Title against Ivy Nile in a match that could go either way. Other than that, we could be getting some fallout from Moustache Mountain’s issues last week. Let’s get to it.

We open with a recap of Ashton Smith/Oliver Carter winning the Tag Team Titles last week. As a result, former champions Moustache Mountain doesn’t seem happy with each other.

Williams bails to the floor to start but Andrews follows him outside and starts chopping away. Back in and Williams rakes the eyes to break up the armbar so Andrews twists the knee around the ropes. They go to the apron where Williams snaps the arm down, followed by a snap suplex for two back inside.

A belly to back gets Andrews out of trouble but Williams is right back on the arm to cut that off. The crossface chickenwing doesn’t work on Andrews, who is right back with the Stundog Millionaire. They strike it out with shots to the other’s damaged limb until Andrews grabs a left armed Side Effect for two. Another Stundog Millionaire misses and Williams kicks him in the arm for two more. Andrews goes up but gets pulled down by the arm, allowing Williams to take out the leg for a change of pace. Cue the masked Tiger Turan for a distraction though, allowing Andrews to grab a small package for the pin at 9:48.

We look at Moustache Mountain winning the Tag Team Titles and Trent Seven’s growing obsession to hold onto them, even if it meant slipping towards the dark side. Next week: an address from Seven.

Mark Coffey gets a phone call from his brother Joe, who is still gone. Mark says if Joe needs anything, call him or the rest of the family as things seem to be ok.

Eddie Dennis is here with Symbiosis. Primate powers Mayfair into the corner to start but Mayfairs dives at him with a headlock. Blake comes in and gets knocked into the corner, allowing T-Bone to hit a suplex. A double stomp sets up a fall away slam to give T-Bone two but Blake manages to roll over. The hot tag brings in Mayfairs to clean house…until a clothesline takes his head off. Primate’s top rope headbutt finishes at 4:34.

Post match Symbiosis turns on Dennis and lays him out for good. I’m down with that.

Oliver Carter and Ashton Smith are very happy with their title win. Smith’s daughter was very pleased with the win.

Xia Brookside is here with Alexander. Amale gets powered into the corner to start but she is right back with a running shoulder. A running clothesline has Alexander in so much trouble that Brookside offers a distraction, only to have Alexander miss an elbow. Back up and Alexander manages to kick her to the floor and it’s a chinlock back inside. That’s broken up and they slug it out until Amale hits a faceplant. Amale kicks Brookside off the apron but the distraction lets Alexander hit a running knee to the head for the pin at 6:53.

Wolfgang talks to Damon Kemp, who has no idea what he said. They go drinking, which doesn’t go well for Kemp.

Lash Legend brags about how great she is and isn’t impressed by an interrupting Myla Grace.

Nile is challenging and gets powered up against the ropes to start. A trip to the mat gives us a standoff but they’re right back on said mat for some grappling. Satomura grabs a gutwrench suplex but it’s already back to the grappling. Back up and Satomura’s running crossbody is pulled out of the air as the power gets Nile out of trouble.

The leg is tied up so Nile can crank on both arms but Satomura reverses into an armbar. An exchange of kicks goes to Nile for two and she hits some running forearms in the corner. Something like Diamond Dust gives Nile two and a running enziguri gets the same. Nile is back up with the dragon sleeper but Satomura flips backwards for the retaining pin at 10:27. 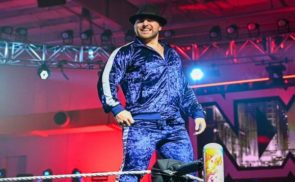