It’s the go home show for Deadline and I’m not exactly expecting much tonight as a result. The card is mostly set, though we do need to determine the final entrants in each Iron Survivor Challenge. That means a pair of triple threat matches and they at least have some stakes going in. Let’s get to it.

The rest of Chase U is here with Chase. A running boot rocks Wagner at the bell but he’s fine enough to headlock both of them at once. That’s broken up and a double shoulder puts Wagner on the floor. Axiom loads up a dive but gets rolled up for two by Chase. That’s enough for Wagner to get back up and send them both outside as we take a break. Back with Chase hitting a top rope superplex on Axiom, who lands near Wagner.

Either way, Axiom heads to the floor and it’s a slugout between Chase and Wagner. A Russian legsweep drops Wagner to set up the spelling stomps, followed by a tiger driver to give Chase two on Axiom. Wagner comes back in but gets triangle choked by Axiom. That’s broken up and Wagner plants Chase for two. Chase DDTs both of them at once but Axiom shoves Chase to the floor and superkicks Wagner for the pin at 11:58.

Julius Creed’s knee is cleared for him to compete but Ivy Nile asks the trainer to check his ribs. Those are banged up, and he won’t be able to compete because of them. Brutus Creed isn’t happy, but Nile says she’s protecting Julius.

Cora Jade is ready to do whatever it takes to become #1 contender.

Bron Breakker is about to go fishing when Apollo Crews shows up at the doc to join him. Crews compliments the boat and Breakker shows him how to cast. They praise each others’ athleticism, with Breakker admitting he copied the standing moonsault from him. Crews asks if this really calms you down, with Breakker talking about the pressure that comes from being champion.  Crews catches a fish, earning some praise from Breakker, before throwing it back. They agree that Deadline should be a good one and shake hands. Crews says today wasn’t Breakker’s day with fishing and Saturday won’t be his day at Deadline either.

Bryson Montana is in the ring for a match but Indus Sher takes him out. Cue Montana’s opponent.

Actually hang on as Bernal has a sudden hamstring injury so he’s out. Indus Sher says they won’t fight the Creed Brothers unless they’re 100%, so the challenge is turned down for now. Cue the Creed Brothers but Ivy Nile and some referees hold them back. No match.

Sol Ruca danced on Tik Tok at a live event but Brooks Jensen/Josh Briggs and Malik Blade/Edris Enofe got in an argument behind them. A tag match was set.

Stacks is here with D’Angelo, who is getting quite the positive reaction here. Quinn drives him into the corner to start but D’Angelo slugs away at the ribs. A suplex drops Quinn again Quinn’s Samoan drop sends D’Angelo outside, only to run him over back inside. D’Angelo hits something close to John Cena’s ProtoBomb for the pin at 1:49.

Post match D’Angelo says he’s back and he wants Wes Lee and the North American Title. Cue Lee to say the Don is back and the champ is ready for him. Dijak took Lee out recently though so if D’Angelo wants the title, he’ll have to wait until Lee takes care of some business. That doesn’t work for D’Angelo, who says his business comes first. Dijak pops up on screen to say he’s going to decimate NXT and take the title. Then Stacks jumps Lee, who shoves Stacks down and bails from the numbers advantage.

Last week, Hank Walker talked to Charlie Dempsey and says he wishes he could have followed in his father’s footsteps. Walker wants respect and they can do this if they need to. Dempsey says he’ll show Walker that he doesn’t belong.

Scrypts looks at his debut match and talks about how he needs to change things up, starting with the chosen ones. He writes his name down while surrounded by crinkled papers.

Dempsey slaps him in the face to start so Walker takes him into the corner. There’s a big hiptoss to send Dempsey flying and a slam makes it worse. Dempsey grabs a gutwrench suplex but here is Drew Gulak of all people for a distraction. The Kimura keeps Walker in trouble abut he fights out and hits a Thesz press. That’s fine with Dempsey, who dragon screw legwhips him down but a half crab attempt is broken up. Dempsey cranks on the knee instead and ties up the face at the same time to make Walker tap at 4:02.

Zoey Stark talks about timing and knowing how none of the people in the Iron Survivor Challenge can touch her.

Grayson Waller is ready to win the Iron Survivor Challenge because everyone is scared of him going in.

And now, Pretty Deadly as Santa and an elf in a Christmas set in the ring, for the real meaning of Christmas. They both sit in the throne (yeah there’s a throne) and read the book, which talks about their bulging sacks overflowing. They’ll never lose the titles and never be bruised so they have a Merry Christmas hug….and here is New Day to interrupt.

Kofi Kingston talks about how Pretty Deadly has beaten everyone, so let’s have a title match at Deadline. The fight is on and New Day clears the ring without much effort, including having presents put on Pretty Deadly’s heads.

Javier Bernal is going to leave and suddenly remembers he’s in pain when McKenzie Mitchell shows up. No, he is NOT scared of Indus Sher, who don’t want any of him. He accuses Mitchell of being biased and wants someone more fair. Cue Ikemen Jiro, who Bernal trusts. Jiro calls him a chicken and Bernal isn’t pleased.

Chase U is here too. Dawn shoves her down to start and hits a running shot to the back. Hail fights up and slugs away, including a running shot in the corner. There’s a t-bone suplex to Dawn, who is right back with a sitout reverse DDT. A second one finishes Hail at 2:50.

Post match Alba Fyre pops up to go after Dawn but gets held back by referees. Fyre charges anyway and a referee gets misted by mistake.

Kiana James is ready to be smart and win the Iron Survivor Challenge.

Lyra Valkyria is here next week.

Odyssey Jones is here with Blade and Enofe. Jensen gets knocked into the corner to start and Blade hits a dropkick for two. That’s broken up and it’s Jensen working on the arm as Kiana James’ assistant shows up with a letter for Jensen. Blade hits a big moonsault on the floor onto Briggs, leaving Enofe to hit an old Dean Ambrose standing top rope elbow for two on Jensen. Von Wagner shows up to brawl with Jones and it’s the high/low to give Briggs the pin at 3:25.

Roxanne Perez is ready to prove herself because she keeps getting screwed over. But how do you prepare for a match that has never taken place before? She looks in a mirror to talk herself up and seems to buy it.

Shawn Michaels runs down the concept of the Iron Survivor Challenge.

In the back, Brooks Jensen opens the envelope from the assists, which contains VIP tickets to Deadline from Kiana James. Hartwell starts fast but Choo headlock takeovers Henley. A double rollup gives Hartwell two as Toxic Attraction is watching. Back up and Henley flips both of them down at once, with Hartwell being sent outside. Hartwell kicks Henley down on the floor though and we take a break.

We come back with Choo in the Tree of Woe with Hartwell kicking away, only to get rolled up by Henley. With Choo free, Hartwell is sent outside and Henley is suplexed, with Hartwell having to make the save. The Tower of Doom leaves everyone down and Choo splashes Henley. Then Hartwell sends Choo outside, decks Henley, and steals the pin at 10:15.

Toxic Attraction says of course they’ll be at Deadline but Indi Hartwell comes in to say Saturday is her night.

Here is Grayson Waller for the Grayson Waller Effect, with the rest of the Iron Survivor entrants (JD McDonagh, Carmelo Hayes, Axiom and Joe Gacy) as his guests. Waller insults all of them but Hayes says he’s ready to show that he is the A Champion again. McDonagh asks about Hayes losing the North American Title twice, but Hayes says that doesn’t matter right now. McDonagh is sure he can go 25 minutes, which Waller would never understand.

Waller shrugs that off and asks Gacy about this group. Gacy says individuals are selfish and will step over each other to get what they want. Axiom talks about how you have to evolve to win and that is where he excels. Hayes: “NERD!” We get a question from a fan: which spot would you want to enter the match?

Axiom says first or second so he can maximize his falls, but that doesn’t appeal to anyone else. Gacy promises that he’ll win but Hayes says he won’t miss. Waller says you never know when someone is going to strike first, earning himself a headbutt from Gacy. The fight is on and everyone but Waller heads to the floor, leaving Waller (with camera) to flip dive onto everyone else. The big brawl ends the show. 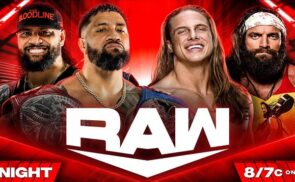 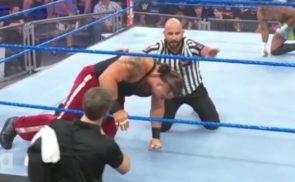 WATCH: NXT Star Returns To The Ring After Injury Absence