I’m at the point where I don’t know what to expect from this show, as you might get someone making a one off appearance before debuting on the main NXT show or a name with nothing else going on. The show has worked before so maybe they can do it again here. Let’s get to it.

This is Griffin’s in-ring debut. Blade staggers the much bigger Elliott with a dropkick but Elliott hits a quick splash on the back to take over. Griffin comes in to work on Enofe’s arm but that’s reversed into another wristlock, allowing Blade to come in with the ax handle. A double belly to back suplex drops Griffin again but he’s right back with a spinebuster.

Elliott comes back in to knock Enofe down, allowing Griffin to whip him into the corner over and over. Elliott’s Pounce sends Enofe flying and the nerve hold goes on. A sitdown splash misses though and the hot tag brings in Blade to clean house. Blade’s high crossbody gets two on Elliott but it’s back to Griffin for a powerslam. Enofe dives in for a save and it’s a legsweep into a frog splash for the pin on Griffin at 6:33.

Henley powers her into the corner to start and then sends Hail down, which has Hail thinking twice about this. There’s a shoulder to put Hail down again and Henley throws in a dance. Back up and Hail hits a running ax handle to take over for the first time and a rollup gets two. The double arm crank goes on but Henley fights up and hits a Shining Wizard for the pin at 4:19.

Andre Chase is here with Hayward (who seems to be a bit sunburned), who takes him to the mat with a headlock. That’s reversed into a headscissors but they’re both back up to run the ropes without hitting each other. Chen grabs a headlock takeover before switching to a front facelock to stay on the neck. We hit the chinlock, leaving Chase to coach from ringside. Hayward fights up and (with a bloody nose) hits his bouncing splash for two. Chen’s fireman’s carry is broken up and Hayward grabs a spinebuster for the pin at 5:56. 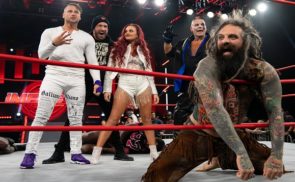