We are less than two weeks away from Crown Jewel and that means the card is going to need a little more build up. Two more matches were added last week and now we are probably going to get either some build towards those matches and/or even more matches added. That is what the show needs so let’s get to it.

Here is Judgment Day to get things going. Rhea Ripley says that last week, AJ Styles found out that Judgment Day runs Monday Night Raw and that Dominik Mysterio is all man. Damian Priest wants the people to rise for the greatest luchador of all time. Dominik says these are the only people who ever believed in him and says last week was proof that Eddie Guerrero was his generation’s Dominik Mysterio. Cue the OC to say Dominik is stupid because he’s more like the James Ellsworth of this generation. Karl Anderson is ready to face Finn Balor right now so let’s do this.

Everyone else is at ringside and Anderson knocks him outside as we take an early break. Back with Anderson fighting out of the corner and dropkicking Balor in the knee. A kick to the leg sends Balor to the apron and Anderson twists the leg around the middle rope. Balor knocks him down and hits some forearms to the back of the neck to set up the chinlock.

Back up and Anderson hits an uppercut to the face and adds the spinebuster for two. We take another break and come back with Anderson powerbombing him out of the corner but Balor reverses a fireman’s carry into a Nightmare on Helm Street. Balor’s kick in the corner is countered and Anderson’s middle rope neckbreaker gets two.

Balor is back up with a Sling Blade into the dropkick in the corner but Anderson catches him on top. A superplex drops Balor so Judgment Day offers a distraction, meaning the fight is on outside. Ripley posts Gallows and slams him on the floor as Dominik distracts the referee. Anderson fireman’s carries Balor but gets low blowed by Ripley to give Balor the pin at 17:09.

Johnny Gargano mocks Miz, saying he knows what’s going on between Miz and Dexter Lumis. Miz says there’s nothing going on and he’s going to go tell the truth.

Here is Miz for a chat/explanation. Miz admits that Johnny Gargano is right and he has been keeping a secret, but first let’s recap. We hear about some of the things that Dexter Lumis has been doing to him before Miz says that this is all because of Tommaso Ciampa. Miz chose to mentor Ciampa instead of Lumis and now Lumis is out for revenge. Also, if anyone has seen Ciampa, send him back!

Cue Johnny Gargano to say Ciampa isn’t missing but rather injured, so Miz is just a huge liar. If Miz wants Lumis and Gargano out of his life, all he has to do is tell the truth. Gargano loads up the whistle….and it’s R-Truth interrupting. Truth wants to talk about the truth but Miz isn’t going to talk down about Truth’s hometown comfort food. Truth: “You aren’t talking down about my North Carolina mac and cheese!” The challenge is on and Truth/Gargano say Miz can’t handle the truth.

R-Truth vs. The Miz

Miz jumps him to start but Truth takes him down ala John Cena. You Can’t See Me takes too long though and Miz is back up with a running knee. Then Dexter Lumis, or someone who looks like him, pops up near ringside to distract Miz so Truth grabs a rollup pin at 2:54.

It’s Johnny Gargano instead of Lumis.

We get a sitdown interview with Candice LeRae who is thrilled to be back in WWE. She can’t believe she made it to Raw but here is Damage Ctrl to interrupt. Bayley talks about the people they’ve put on the shelf but Candice thinks all Bayley is missing is the Raw Women’s Title. The beatdown is quickly on.

Elias runs into Matt Riddle and his bongos, who still wants the two of them to jam together. Elias is willing to let last week slide but Riddle says he has been hitting the bongs all week. Cue the Alpha Academy to tell them to SHUSH so the argument sets up the challenge for later.

Hold on though as Seth Rollins comes out to join commentary. Theory knocks him into the corner to start but Ali is back up with a spinning headscissors into another corner. An elbow to the face sets up an elbow on the apron though and Ali is in trouble as we take a break. Back with Ali being sent outside, leaving Theory to pick up his phone.

Some picture taking allows Ali to hit a dropkick to the floor, setting up the top rope flip dive. Ali strikes away back inside and hits the rolling neckbreaker for two. A tornado DDT gets two but Theory pulls him into a brainbuster onto the knee for two more. Ali takes him down and goes up but Rollins’ distraction sets up A Town Down to give Theory the pin at 12:00.

Post match Rollins beats up Ali a bit before walking away….where Ali manages to jump him near the stage. The brawl is on with Rollins being sent into the video screen.

Miz comes up to Johnny Gargano in the back and wants to know what’s up with that. Miz leaves and it’s JBL and Baron Corbin taking his place. JBL wants Gargano to stop messing with Miz and show him some respect. Gargano shakes JBL’s hand and calls him MC Hammer Pants. He isn’t sure what Corbin is calling himself now either and that seems to set up a match later.

Video on Bianca Belair vs. Bayley before their match later tonight.

MVP is here with Omos and talks about Omos’ recent showdown with Braun Strowman. The four victims are called over, with MVP telling them to look at Omos’ hands. Threats are made but let’s ring the bell. The beating is on and all four going after Omos at once completely fails. Big boots and elbows have the four down and a chokebomb gives Omos the double pin at 1:42.

Otis is here with Gable, who wrestles Elias down without much trouble to start. Elias can’t get a backslide but can hit a suplex for two. Back up and Otis low bridges Elias to the floor as we take a break. We come back with Gable hitting a Swan Dive but Elias fights up with elbows to the face. A splash in the corner but Gable pulls him into an ankle lock. With that broken up, Gable pulls him into a Razor’s Edge, which is flipped forward into a DDT for two. Gable goes up top but gets kneed out of the air for a rather near fall. Elias’ swinging suplex finishes at 8:32.

Post match the beatdown is on but Riddle runs in to save Elias.

We look back at the OC/Judgment Day sequence.

The OC is in the trainer’s room and AJ Styles says they have a Rhea problem. Worry not though as Luke Gallows says he has a way with women and can solve this. Styles: “He’s terrible with women!”

Before the match, JBL mocks millennials who want safe spaces and makes fun of Charlotte’s professional sports teams. JBL sits in on commentary as Gargano is sent into the corner but comes out with a rollup for two. A running hurricanrana sets up a dropkick to send Corbin outside for the suicide dive. One Final beat is blocked with a right hand to the floor though and Corbin takes over while slowing things down.

Gargano manages a discus forearm and a dropkick sends Corbin back to the floor. The apron superkick sets up a dive, which is pulled out of the air and Gargano is planted on the announcers’ table. We take a break and come back with Corbin hitting his torture rack neckbreaker for two. Corbin misses a charge in the corner and Gargano hits a bulldog for a breather.

The slingshot spear gives Gargano two but Corbin is right back with Deep Six for two of his own. The slid under the ropes clothesline is countered with a superkick to give Gargano two more. They head outside with Gargano sending him into the steps, then stealing JBL’s hat for some dancing. A tornado DDT off the announcers’ table drops Corbin again but JBL breaks up One Final Beat. End of Days finishes Gargano at 14:09.

Post break, Miz comes up to Johnny Gargano with a get well card for Candice LeRae. Miz is willing to tell the truth next week, but Gargano will do it if Miz doesn’t. And Miz didn’t even sign the card!

We get a long video on Brock Lesnar vs. Bobby Lashley, looking at how similar they are and how dominant both of them have been, setting up their match at Crown Jewel.

Non-title and Bayley has Damage Ctrl with her. Feeling out process to start until Belair powers her to the mat. A slam drops Bayley and we slow down a bit until Belair runs her over again. Belair can’t roll some suplexes though as Bayley pulls her into a crossface. That’s countered into a backbreaker for a breather and Bayley gets dropped on the floor as we take a break.

Back with Belair fighting out of a chinlock but getting taken down by a clothesline to the back of the head. A suplex from the apron to the floor puts Belair down again and Bayley starts in on the arm. Belair’s arm is wrapped around the rope and then twisted a bit, followed by more around the rope cranking. A suplex drops Bayley to give Belair a breather and the right hands in the corner put her in more trouble.

Bayley gets smart by pulling the braid but the Bayley to Belly is blocked. Belair’s handspring moonsault only hits knees but so does Bayley’s middle rope elbow. Now the handspring moonsault can connect for two and they head back outside, where Bayley cranks her down by the arm again.

We take another break and come back again with Bayley snapping the arm over the top but not being able to hit her own KOD. Instead Belair hits her own Bayley to Belly for two. A spinebuster gives Belair two more but a Sky distraction lets Bayley hit a super Bayley to Belly for a rather close two. Damage Ctrl loads up the announcers’ table but Belair powerbombs Bayley onto (not through) the table.

Another powerbomb against the post sets up a face first drop onto the apron. Sky gets in a distraction though and Kai kicks Belair in the face. Back in and…the referee ejects both of them as Nikki Ash dives off the top onto Damage Ctrl and the referee. Back in and the Rose Plant is countered into the KOD for no count as the referee is still down. Nikki (Cross, not Ash, and with no mask) comes back in and DDTs Belair so Bayley can steal the pin and the title at 23:10.

Post match Nikki comes back in and beats on Bayley as well. 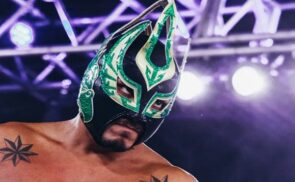 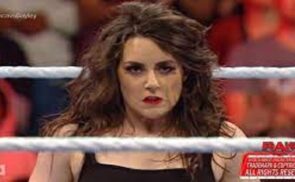