Cue Judgment Day, with Rhea Ripley saying they run Raw and Finn Balor saying they ran through the tag division and are now the #1 contenders. They find it interesting that the Bloodline has never stepped to the Judgment Day and Dominik thinks he smells fear. Jey says their Tag Team Title reign started when they beat the Mysterios and they’ll do it again to Judgment Day next week.

The Uso Penitentiary is mentioned, sending Dominik into a story about the tough people he saw in jail. When you’re locked up, an Usos is a wannabe, and there is no bigger one than Sikoa. Ripley gets in Sikoa’s face and the fight is on, only to have Mustafa Ali appear and dive onto Sikoa.

Joined in progress with Ali flipping over him out of the corner but walking into a Samoan drop. The running Umaga attack connects and we go to a split screen interview from earlier today, with Ali saying everyone got to fight back against the Bloodline except for him. He’ll do that tonight and we go back to full screen with Sikoa headbutting Ali down to cut off a comeback.

Ali manages some running dropkicks though and a superkick sends Sikoa outside. The dive is cut off by a shot to the face but Ali avoids another Umaga attack. Sikoa posts him so the Usos are back…and here is Kevin Owens to go after them. Ali grabs a tornado DDT for a close two but misses the 450. The Samoan Spike finishes Ali at 5:31.

Post match Owens hits the Stunner on Sikoa but the Usos break up the splash off of the barricade. Owens throws some chairs until officials break it up.

Bobby Lashley is ready to win a six way elimination match to get a US Title shot next week. These hoops aren’t going to keep him from getting to Austin Theory.

Video on Cody Rhodes’ surgery and recovery. He is officially back at the Royal Rumble.

Elias wants to talk to Adam Pearce about main eventing Wrestlemania but bumps into MVP. There is no need to get into the Royal Rumble because the winner has been decided. Elias agrees to a match tonight, but MVP never specifically said who he was talking about.

Dawkins (hometown boy) elbows Benjamin in the face to start but walks into a German suplex. Ford comes in with a kick to the head and a high crossbody to Alexander. They go to the apron with Alexander hitting a running clothesline to put Ford down. Cue MVP as we take a break. Back with Ford sliding through Alexander’s legs to bring in Dawkins for the house cleaning.

The frog splash gives Ford two but a Doomsday Device is broken up so Shelton can belly to belly superplex Ford for two. We hit the parade of dives and it’s Dawkins hitting the big running dive to take out the pile. Back in and Benjamin tosses Dawkins into the knee to the face but Dawkins reverses into a crucifix for the pin at 9:04.

Here is Becky Lynch, coming through the crowd, for a chat. She wastes no time in calling out Bayley, then accuses her of wanting to find a manager backstage. Cue Bayley, who doesn’t like being accused of being a Karen, though she also doesn’t seem to get the idea. Bayley points out that she has Damage Ctrl here with her but Becky has no friends. Becky says she has an arena full of them and Bayley just has a career that peaked in 2015.

They argue over who should have had Becky’s success, with Becky saying she’s going to keep working for this until she can’t anymore. Bayley accuses her of only being The Man because a woman punched her in the face. Becky offers to punch Bayley in the face and the challenge is on for next week in a cage, with no Damage Ctrl. The challenge has Bayley thinking twice but she accepts.

Mustafa Ali hopes Dolph Ziggler loses the #1 contenders match but Ziggler doesn’t have time for this. Ali hits him in the head and asks if he has Ziggler’s attention now.

Or not as MVP says there has been a breakdown in communication. Here is the 2023 Men’s Royal Rumble winner.

Omos knocks him down to start but Elias manages a trip to the floor. MVP blocks a charge so Elias grabs the guitar. That’s taken away and broken by Omos but Elias hits some jumping knees to the face. They don’t exactly do much though as Omos catches Elias on top and hits the chokebomb for the pin at 2:31.

Adam Pearce talks about the main event when Akira Tozawa comes in. Tozawa wants in the Royal Rumble and is willing to have a qualifying match tonight. Pearce says he can have the match but a win only means he’ll be considered.

Chad Gable thinks twice about a test of strength with Dominik Mysterio, who drops at the threat of a leg dive. Priest comes in and blocks a drop toehold but misses a charge. The dragon screw legwhip takes Priest down and it’s Otis coming in to work on the arm. Gable and Priest fall to the floor though and we take a break.

Back with Priest hitting Gable with the running hip attack in the corner and a Broken Arrow getting two. Dominik takes too long on top though and Gable shoves him down, only to miss a top rope splash. The double tag brings in Otis to run over Priest and hit (kind of) the Caterpillar for two. Dominik makes the save though and a middle rope South Of Heaven connects. Gable is back in with the ankle lock to Dominik but another South of Heaven finishes Gable at 10:55.

Dakota Kai and Candice LeRae are here too. Yim sends her to the apron to start but gets caught with a throat snap across the top. A missile dropkick sends Yim into the corner and the running knees make it worse. Yim fights back but Sky flips out of a backdrop attempt. Instead a running neckbreaker gives Yim a breather and she kicks away at Sky. A German suplex drops Sky again but Kai offers a distraction. That earns her a pull from Candice, who gets knocked down as well. Eat Defeat finishes Sky at 4:32.

Video on Alexa Bliss saying she isn’t under Bray Wyatt’s control but then being interrupted by Uncle Howdy.

Here is Bianca Belair, who didn’t like being gone last week after being busted open. There is always a risk vs. reward and the reward is being the Raw Women’s Champion. She wants Alexa Bliss out here right now, so here is Bliss to say she’s ready to fight now. Belair throws out the challenge for the Royal Rumble and Bliss accepts, but they need to have a brawl now too. They fight around ringside and into the back with Belair getting the better of things. Belair loads up some chairs but sees Uncle Howdy in a tunnel. That’s enough for Bliss to hit a DDT and see Howdy, which she doesn’t like.

Tozawa isn’t sure what to do here and gets wrestled to the ground without much trouble. Reed sends him into the corner for the loud chop and a running shot to make it worse. We hit the waistlock but Tozawa fights up and sends him to the floor. The suicide headbutt connects but Reed toss powerbombs him into the apron. A shoulder from the apron sets up the Tsunami to finish Tozawa at 4:18.

Seth Rollins is VERY fired up about getting the US Title back because he’ll take it to Wrestlemania and beat Roman Reigns.

Miz vs. Dolph Ziggler vs. Baron Corbin vs. Seth Rollins vs. Finn Balor vs. Bobby Lashley

Elimination rules, JBL is here with Corbin, and the winner gets a US Title shot against Austin Theory next week. We’re joined in progress with Theory on commentary and three separate brawls all over the place. JBL distracts Lashley so Corbin can get in a cheap shot on the floor. Rollins goes after Balor’s bad ribs inside but gets caught on top by Corbin. The required Tower Of Doom brings Rollins down hard and Lashley is looking rather serious.

The spear hits post though and it’s time to go after Lashley. Ziggler hits a Fameasser and Miz hits the Skull Crushing Finale for two on Lashley, which is quite the kickout. Miz boots Ziggler in the face and grabs a Figure Four but Ziggler turns it over. With Miz facing the mat, Rollins hits a Stomp for the elimination at 5:12.

We take a break and come back with Lashley knocking Corbin into the barricade, only to have Balor and Corbin post him. Rollins goes after Theory and throws a drink in his face before going inside to help Ziggler hammer on Corbin. Ziggler and Rollins trade rollups for two each before Balor hits a big running flip dive onto the floor. Ziggler dives onto the bigger pile and then superkicks Corbin back inside. A superkick hits Lashley and the Zig Zag takes him down again. Rollins is back in with the Pedigree to get rid of Ziggler at 13:05.

We take another break and come back with Corbin Deep Sixing Balor for two. Corbin punches Rollins outside but gets clotheslined in the corner by Lashley. The spinning Dominator gives Lashley two on Rollins but here is Omos for a distraction before the Hurt Lock can go on. Corbin hits a big clothesline on the distracted Lashley but gets caught with Balor’s Sling Blade. Balor dropkicks Lashley into the corner and hits the Coup de Grace, only to get Stomped by Rollins for the pin at 19:47.

Corbin pulls Rollins to the floor where Omos sends him over the announcers’ table. Omos glares down at Corbin, who gets back inside for a spear from Lashley for the pin at 22:12. That leaves Lashley vs. Rollins, but Theory hits Lashley with the belt. Omos goes after Theory, earning himself a Stomp onto the announcers’ table. Rollins dives on Theory and clotheslines him over the barricade, only to have MVP offer another distraction. Lashley hits the spear on Rollins for the pin and the title shot at 23:16.

Lashley and Theory stare each other down to end the show. 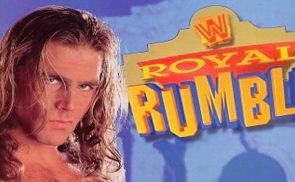