That’s some high praise. There have been a lot of stars throughout WWE’s history but only a few have reached the top of the company. Those are the names that fans remember for decades to come as they have left a lasting impact on everything they do. Hearing from them even after they are retired can still mean a lot and now one of the all time legends has made a bold statement.

During a recent edition of WWE’s Table For Three, WWE Hall of Famer Bret Hart said he never saw a villain in WWE who was as good as Jerry Lawler, who was also on the show. Hart and Lawler feuded on and off from 1993 until 1995, with the two squaring off in multiple matches, with their most notable being the Kiss My Foot match at King Of The Ring 1995.

Opinion: You don’t get that kind of praise from someone on Hart’s level very often and Lawler deserves quite a bit of credit. There was something so dastardly about Lawler that it was easy to want to see him get pounded into the ground every time he was on camera. Hart vs. Lawler is a classically underrated feud and I can see why Hart looks back on Lawler’s work so fondly.

What do you think of Hart’s statements? Who is the best villain in WWE history? Let us know in the comments below. 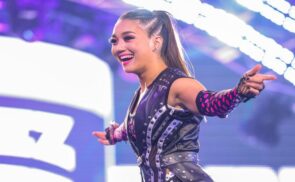